Abort73.com > Abort73 Blog > Abortion in the Age of Coronavirus

Abortion in the Age of Coronavirus 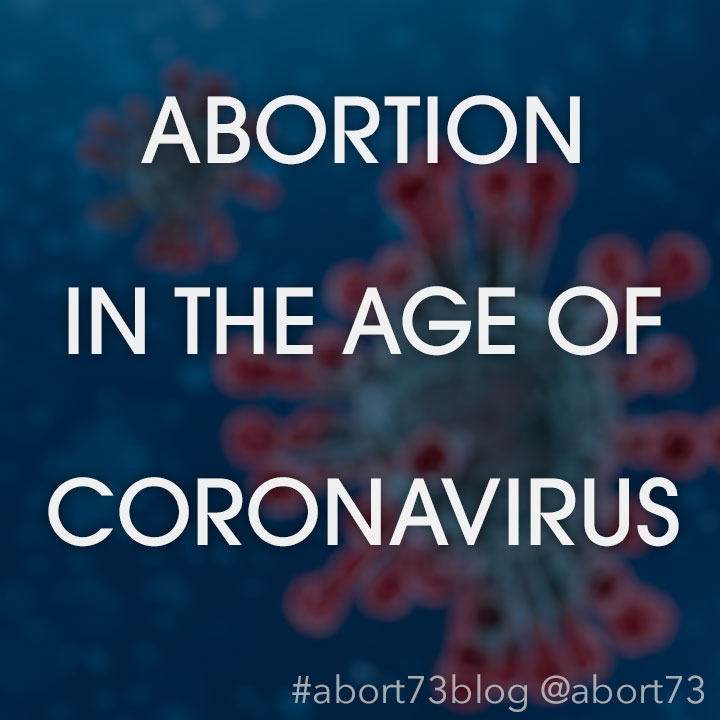 It’s a strange time when churches and abortion clinics are both suing the federal government for ostensibly the same thing. Namely, the right to stay open. Then again, we may be living through the most quintessentially strange time in modern history—and nobody knows when it will end or what will emerge on the backside. Life lessons have been ours in abundance; consensus has not. The ever-shifting COVID-19 containment measures have become every bit as contentious as abortion itself. One man’s “essential” is another man’s “superfluous,” and vice versa. Hence the lawsuits.

Those who oppose abortion are outraged at the notion that an elective procedure could be deemed a medical necessity, just as those who support abortion insist that easy access is more essential during a pandemic than at any other time in history. The outrage on both sides demonstrates again that we little understand our ideological opponents—which is worth considering. Ironically, many of the principles being used to justify this forced (“anti-choice”) lockdown are the same ones that are routinely flouted when the context is abortion.

New York has been ground zero for America’s coronavirus crisis. It is also ground zero for the killing of unborn children. In New York City, one baby is killed in the womb for every two who are born alive. Last January, New York Governor Andrew Cuomo signed into effect the most radically pro-abortion legislation in American history. Though, truthfully, it is only slightly more radical than Roe v. Wade itself, which is already amongst the most permissive abortion policies in the world. Governor Cuomo calls abortion a “fundamental right” and promises that women in New York will always be free “to make [their] own decisions about [their] own personal health.” They will always have the “right to control their own body.” Until now, apparently.

Today, women in New York are not free to make their own decisions about their own personal health. They are required to stay home, and the reason is simple. In order to save lives, we must give up some personal freedoms. “The mission,” Governor Cuomo proclaimed while deploying the National Guard, “is to save lives.” He went on to explain that the thing which makes COVID-19 so especially cruel is that “it attacks the weakest of us.” It attacks “our most vulnerable.” This makes it much worse, because these are the people for whom “every instinct tells us we’re supposed to protect.”

Tragically, the economic calculation that Cuomo here condemns is the same one that so many use to justify abortion. Could it be that Governor Cuomo is “principled” when it suits his agenda and unprincipled when it doesn’t? Michele Steerlace-Accorsi, of Feminists Choosing Life, makes the following points in an editorial for The Buffalo News:

As of today, almost 50,000 deaths in the U.S. have been attributed to coronavirus. The first is reported to have happened on February 29. Over that same span, abortion has killed somewhere around 135,000 unborn Americans. In New York, coronavirus is reported to have claimed close to 15,000 lives. Abortion has likely killed at least that many and probably more. There is some indication that the panic surrounding COVID-19 is leading to more abortions, not fewer. CBS reports that “providers where [abortion] remains available report increased demand, often from women distraught over economic stress and health concerns linked to the pandemic.” Despite the lockdown and social-distancing requirements, one of Planned Parenthood’s chief medical officers in New York says that “more people (are) making and keeping (their abortion) appointments than usual.” This is not good news. And while coronavirus deaths are calculated and reported in real time, abortion deaths are not reported for months or years to come. And California doesn’t bother counting them at all.

It’s easy to criticize Andrew Cuomo—whose commitment to protecting human life did not even extend to shuttering elective abortion—but in light of his ideological commitments, what else could he have done? I hate abortion, but I don’t expect its proponents to simply concede that it’s nonessential. Abortion advocates must insist that abortion is essential or their entire position collapses. If they’re willing to grant that access to abortion isn’t necessary during an emergency, on what grounds can they say that it’s necessary at all? Abortion is elective in the sense that the aborting mother’s health does not require it, but the practical differences in outcome between having an abortion and not having an abortion can hardly be overstated. Those differences are far more pronounced and profound than for virtually any other surgical procedure. Abortion is not elective in the same way that cosmetic surgery is elective because the clock is ticking. You have one small window in which to kill the child before it becomes homicide.

You see, access to abortion is either essential or it is essentially evil. Those are the only options, no matter what the purported centrists say. If our value as human beings is intrinsic, then abortion is condemnable no matter when it is performed. But if our value as a human being is functional, then there can be nothing wrong with abortion no matter when it occurs—even after birth, as Peter Singer argues. I heard Michael Shermer interviewed recently on the Joe Rogan podcast in advance of his new book, Giving the Devil His Due. In general I consider Shermer a reasonable and articulate fellow—and the emphasis of his new book is a noble one: Listen to the people who disagree with you; you might learn something! But much of Shermer’s rationality seems to go out the window whenever abortion comes up. He has no qualms roundly condemning the Holocaust, but when it comes to abortion, he says things like, “binary thinking is not helpful.” And, we shouldn’t think about moral issues as “right or wrong, good or evil, but [rather] on a spectrum.”

Joe Rogan shares Shermer’s equivocal position on abortion and laments that it’s such a messy topic. “Here’s a clear one,” Rogan suggests. “Don’t murder people; everyone agrees (with that).” He and Shermer then take turns expressing their distaste for both those who would abort a 6-month fetus and those who would try to outlaw the abortion of a 7-day embryo. According to Rogan, abortion is okay “when the fetus is not a fetus” (huh?!) because “it’s not really anything at that point.” Of course, if it’s not really anything at that point, just leave it alone and see what happens. If the embryo really weren’t anything, there would be absolutely no reason to have an abortion.

While everyone may agree that it’s wrong to murder people, human history is riddled with brutal forms of genocide that are all premised on the odious notion that some human beings aren’t actually people—and therefore can be killed with impunity. Dehumanization—which I hold to be always and intrinsically unjust—is at the heart of all these atrocities, and it’s at the heart of abortion as well. Shermer argued elsewhere in the interview that without Hitler, there would have been no Holocaust and probably no World War II. He believes that the vast majority of Germans did not support the extermination of the Jews. And yet it happened, en masse. And whether it was carried out by psychopaths or average Joe’s, the material fact remains. The widespread elimination of marginalized human beings doesn’t require the explicit consent of an entire population. It only requires implicit consent—along with sufficient numbers of people who are willing to poison or mutilate. And the further removed this violence is from the public eye, the easier it becomes to obtain that consent.

Unfortunately, the coronavirus pandemic has already helped push abortion into increasingly private corners. Medical abortion is a two-step process in which drugs are used to force the expulsion of the tiny embryo or fetus. The second drug is taken at home, and the dead child is literally flushed down the toilet. Each year, the percentage of medical abortions increases, and COVID-19 is likely to ramp that up even more. Just as every industry has had to adapt to the pandemic, so has big abortion. TIME reports that Planned Parenthood has now expanded its “telemedicine services” to all 50 states. According to BuzzFeed, “abortion rights advocates across the country have been pushing for (this), even before the coronavirus pandemic,” because it allows “medication abortion (to be authorized) via [video call].” And if you think that medical abortion is a more benign or natural procedure than surgical abortion, think again.

So, where does all this leave us? In light of the fact that U.S. abortion numbers were already starting to creep up in advance of COVID-19, the outlook is not particularly good. And while some maintain that any call to reopen the economy is in violation of pro-life principles, I wonder if they’ve even considered the additional unborn children who are indirectly losing their lives to coronavirus and will continue to do so until we can get out of this morass. Scott Klusendorf does an excellent job demonstrating why the “Stay Home. Save Lives” mantra is such a gross oversimplification: “Pro-life means we will never sanction the intentional killing of innocent human beings. It does not mean that the preservation of life is the only intrinsic good we should pursue." Life is so much more than mere survival, and I fear we’re forgetting that. The cost to ourselves is significant, but the potential cost to unborn children is even worse.