Abort73.com > The Case Against Abortion > The Uncertainty Principle

If abortion might kill a person, then abortion must not be done. 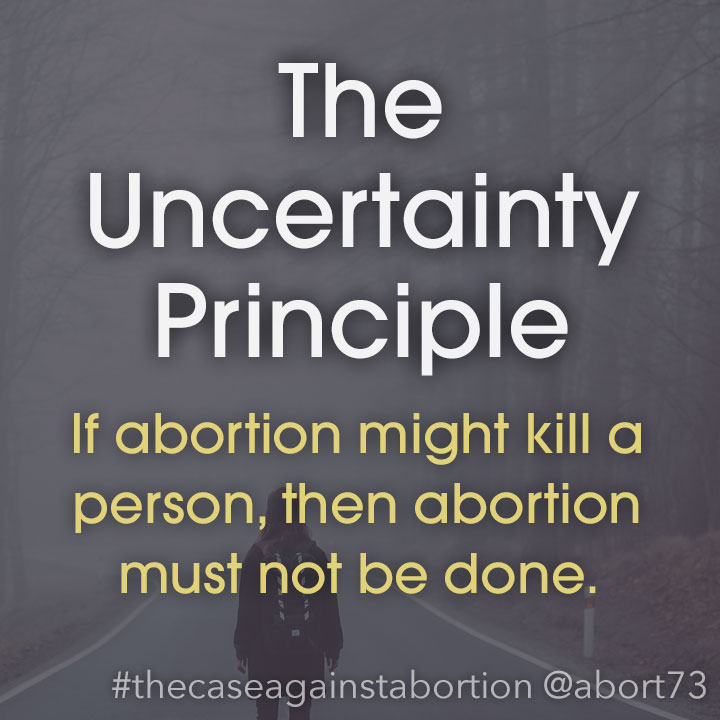 Uncertainty in regard to life's beginning has long been used as an argument in favor of legal abortion. In reality, if any uncertainty exists, abortion ceases to be a justifiable option.

Uncertainty is at the heart of legal abortion in the United States. It was on the assertion that life's beginning is unknowable that the Supreme Court struck down all state prohibitions against abortion.1 In the decades that have followed that 1973 verdict, countless abortion advocates have taken up this same refrain. It goes like this: since we don't know when human life begins, women must be free to make up their own minds about abortion.

There are two problems with the above conclusion. First, as we've already demonstrated, the biological beginning of human life is knowable and has been for a long time. It is only when life is defined according to subjective metaphysical benchmarks that its beginning becomes fuzzy. And here again, there are numerous problems with attaching the notion of personhood to traits like rationality or sentience.

The second problem with arguing for abortion on the basis of uncertainty is this. It's a logical absurdity. Even if we allow for the assertion that the beginning of human life is unknowable, that is not a point in favor of legal abortion. It is a point decidedly against it. In order for abortion to be justified, there must be absolute certainly that it does not kill a human person. Peter Kreeft, a professor of philosophy at Boston College, points out that there are only four possibilities with regard to abortion.2 They are:

Now consider each of these ramifications in actual practice:

Notice that only one of the above scenarios justifies abortion, and notice that it is a scenario that does not exist in the real world. No one can say with absolute certainty that abortion does not kill a human person. At best, someone can be strongly convinced that it does not, but they have no capacity to prove so, since their metrics are indistinct and immeasurable.

By contrast, we can say with certainty that abortion kills a human being (i.e. a living, genetically-distinct member of the human species). It is only when you try to differentiate between human beings and human persons that objective classification goes out the window. Abortion advocates make this distinction for the express purpose of introducing uncertainty into the equation. Since the transition between developing human being and functional human person takes place at some unknown point between conception and birth, or after birth as some ethicists maintain, proponents of abortion think they have found a legal loophole. This is simply not so.

This page was last updated on February 04, 2017. To cite this page in a research paper, visit: "Citing Abort73 as a Source."

Continue to the next page: Abortion and Race