Abortion is condemnable for the same reasons as slavery and the Holocaust. 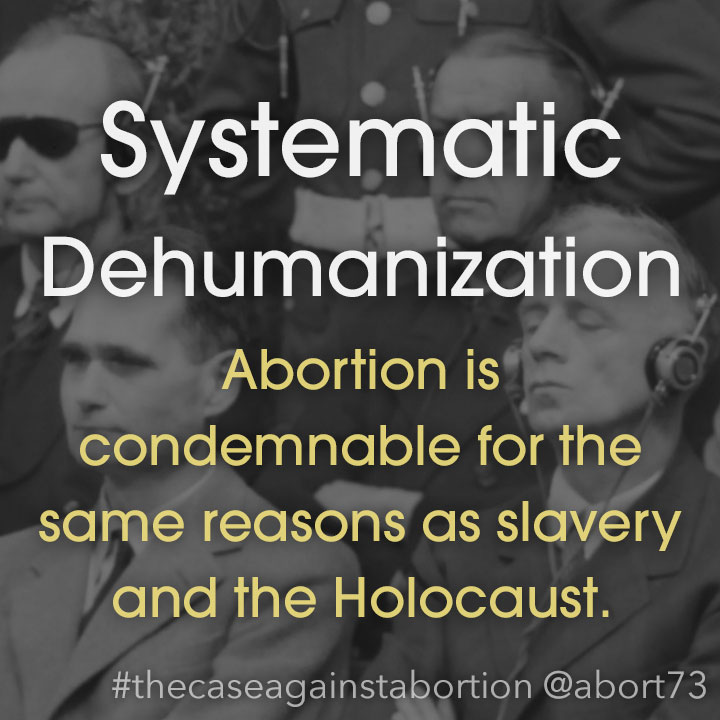 Around the globe, a network of killing centers is eliminating "unwanted" human beings at a staggering rate—relying on the same basic arguments that were once used to justify slavery and the Holocaust.

One of history's most tragic lessons is that human beings have a remarkable capacity for abusing each other. When this abuse is severe enough, and moves beyond the mistreatment of a few individuals, we call it a crime against humanity. These are not crimes of passion; these are crimes of precision. They are not the result of accidental, momentary impulses; they are thought-out and rationalized. The scale of such crimes cannot be carried out by individuals. They require systematic cooperation and consent. Crimes against humanity are almost always built on the assertion that certain human beings do not deserve protection under the law. The most notorious example is the Jewish Holocaust, in which six million European Jews were executed for their alleged racial inferiority.

Raphael Lemkin, a Polish-Jewish lawyer, is the man responsible for making the annihilation of entire people groups an international crime. In 1933, influenced by his knowledge of the slaughter of Armenians by the Turks in WWI and the more recent slaughter of Christian Assyrians by Iraqis, he appeared before The Legal Council for the League of Nations in Madrid and proposed to make the extermination of human groups an international crime, calling such crimes "acts of barbarity."1 His proposal was not accepted. Ten years later, in 1943, he coined the term "genocide" in an effort to more specifically describe the Nazi attempt to annihilate entire ethnic groups. The term appeared in print for the first time in 1944, in Lempkin's Axis Rule in Occupied Europe.2

The word "genocide" combines the Greek word for race (geno) with the Latin word for killing (cide). The Nuremberg trials, which concluded in 1946, used Lemkin's term "genocide" in their indictment against top Nazi officials who were convicted for their collective "crimes against humanity."3 In 1948, the United Nations officially made genocide an international crime at the Convention on the Prevention and Punishment of the Crime of Genocide. The Convention defined genocide as any of a series of acts designed to "destroy, in whole or in part, a national, ethnical, racial or religious group."4 The acts listed include: causing serious bodily or mental harm to members of the group, imposing measures intended to prevent births within the group, or forcibly transferring children out of the group.

Since then, the term "genocide" has been applied to other historic and contemporary crimes against humanity. In some instances, such as Pol Pot's Cambodian genocide, the victims have been targeted for non-racial reasons. This broadening definition of genocide is reflected in Webster's New World Encyclopedia:

The deliberate and systematic destruction of a national, racial, religious, political, cultural, ethnic, or other group defined by the exterminators as undesirable.5

This definition of genocide is broad enough to include abortion, and some organizations have made a compelling case that abortion is genocide. Abortion is certainly deliberate and systematic. By the latest count, close to 20% of American unborn children are aborted.6 In New York City, there is one abortion for every 1.7 births.7 Each day, roughly 2,500 abortions are performed in the United States,8 and close to 60 million American unborn children have lost their lives to abortion since the Supreme Court struck down all state prohibitions in 1973.9 Approximately 93% of abortions occur in free-standing abortion clinics.10 The largest network of abortion clinics belongs to Planned Parenthood, which accounts for a third of all U.S. abortions.11 The specific group of human beings that abortion targets is unwanted, unborn children—a victim class defined by the pro-abortion mantra, "Every Child a Wanted Child." Planned Parenthood's Final Solution for unwanted, unborn children is extermination.

Though the appropriateness of calling abortion "genocide" depends on how broadly you define the term, there is no getting around the fact that abortion has systematically destroyed millions of innocent and helpless human beings. Gregory H. Stanton is a research professor in Genocide Studies and the president of Genocide Watch. He describes genocide as something that develops in eight stages, the third of which is dehumanization. What does this look like in practice? According to Dr. Stanton, "One group denies the humanity of the other group" by equating it with "animals, vermin, insects or diseases." This allows those in the first group to overcome "the normal human revulsion against murder."12

If you've ever listened to someone try to explain why it is morally acceptable to kill a living human being before it is born, you've probably already heard unborn children described in the terms above. If not, public examples are not hard to come by. Warren Hern is one of the most prominent abortionists in the world. He wrote the textbook, Abortion Practice. His central premise is this: unborn children should be viewed not as people, but as a disease. He writes that "the relationship between the [mother] and the [baby] can be understood best as one of host and parasite."13 Famed astrophysicist Carl Sagan joined this chorus by comparing unborn children to segmented worms, fish, tadpoles, reptiles, and pigs."14 That is the language of dehumanization. Even the word "fetus" has become a term of derision used by those who want to deemphasize the humanity of unborn children.

The reason so many people take offense at comparing abortion to historic atrocities is the same reason so many white Americans were scandalized when Martin Luther King Jr. compared the abuse of black Americans to the Holocaust.15 It is easy to condemn injustice that is far away—by distance or time; it is much harder to condemn injustice that sits in your own backyard, especially when it provides a material benefit. Abortion supporters are infuriated at the notion that abortion is comparable to the Holocaust because they incessantly argue that human embryos and fetuses are not actually people. This is the argument that is always made to justify crimes against humanity. It is the same rationale that drove Hitler's mistreatment of the Jews and America's scandalous three-fifths compromise, which reckoned enslaved African-Americans as 3/5 of a person.16 David Livingstone Smith, the author of Less Than Human, notes that society is all too willing to "gerrymander the category of humans in ways that suit us."17

Though there are differences between abortion and historic forms of genocide, there are also huge similarities. If we can't compare atrocities past to atrocities present, then the term "never again" loses all meaning—and we will continue our sad legacy of dehumanizing and abusing those who get in our way or have something we want.

Even if abortion is a systematic injustice, you can't compare it to slavery or the Holocaust. Abortion kills babies before they're self-aware or have had any life experiences. Those killed in the Holocaust were deprived of the lives they were already living, and that is much worse.

To learn our response, continue to the next page: A Future Lost