Abort73.com > Bringing an End to Abortion > Education Before Legislation

It's unlikely that the law will change, until lots of minds change. 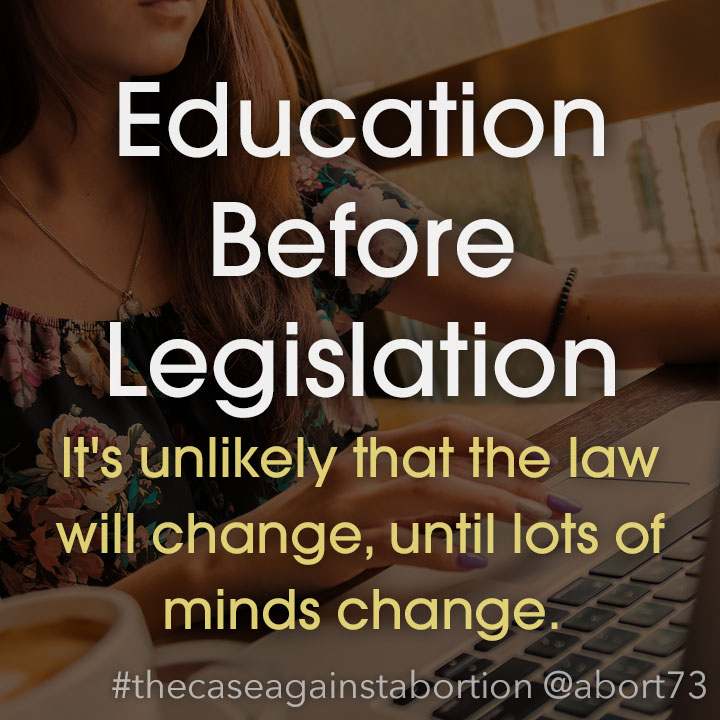 The more someone knows about abortion, the less likely they are to have or recommend one–which is why Abort73 puts so much energy into educating people about abortion. We'd love to see the law change, but minds have to change first.

Planned Parenthood claims that outlawing abortion is the #1 worst way to prevent abortion.1 Of course Planned Parenthood runs the largest abortion business in America. Even if we assume that they have a sincere desire to eliminate abortion, history and common sense tell us that the legality of abortion has a huge influence on a woman's willingness to abort. Nevertheless, Abort73 has embraced a strategy for ending abortion that emphasizes education over legislation. This decision owes not to the recommendations of Planned Parenthood, but to the firm conviction that the law won't change until a lot of minds change first.

To put it simply, Abort73.com exists because a general understanding of abortion does not exist. People on both sides of the debate are more familiar with the slogans than they are with the facts. Abortion may be one of the most common surgical procedures in the world, but an accurate abortion education is hard to come by. In the United States, this educational void goes all the way back to 1973, when seven non-elected Supreme Court justices determined that abortion was a constitutionally-protected act. With one judicial decree, all state prohibitions against abortion were struck down—without a vote and without any widespread public dialogue. More than thirty years and 50 million abortions later, the nation is hardly more informed about abortion today than it was in 1973.

Because Abort73 has embraced a strategy for eliminating abortion that focuses on education instead of legislation, abortion advocates should have nothing to complain of. After all, if we're going to "trust a woman with a choice," shouldn't we trust her enough to hear both sides of the debate? Or should she be strategically shielded from anyone who has serious ethical concerns about the legitimacy of abortion? In the “Considering Abortion” portion of their website, Planned Parenthood urges women to seek out "factual, non-judgmental information about abortion,"2 but then insists that any information that questions the moral legitimacy of abortion should be rejected out of hand.3 This is both intellectually dishonest and—dare we say—judgmental.

When it comes to actual abortion information, the Planned Parenthood website is ignominiously thin. They describe it simply as “a safe way to end a pregnancy.”4 But how does that happen exactly? According to their description of the process, “abortion works by using (gentle) suction to take a pregnancy out of your uterus.”5 This medically-nonsensical explanation of abortion is either an expression of ignorance or deceit. Does Planned Parenthood really not know that pregnancy is a condition—not something that dwells in the uterus? Or are they trying to hide the fact that what is actually removed from the uterus—and violently destroyed—is a tiny genetically-distinct human being?

Though Abort73 wants to see the law change, we're not pursuing that change through lobbying, petitioning, or political pressure groups. We believe that educating people about abortion offers the best hope for eliminating abortion—which is an end goal that almost everyone supports, though abortion-advocates generally frame it in different terms. They speak of eliminating the need for abortion, still bristle at being labeled "pro-abortion," and struggle to frame abortion as anything less than a sort of necessary evil.

To illustrate, consider that prior to the election of Barack Obama, the official Democratic National Platform stated that "Abortion should be safe, legal, and rare."6 If there is nothing wrong with abortion, why should it matter if they're rare? Though the Democratic party has now abandoned the claim that it wants abortion to be rare,7 that doesn't make the population at large any more comfortable with the act of abortion itself. The abortion industry knows that the more familiar the average person is with the mechanics of abortion, the less likely they are to have one, recommend one, or support one as a matter of public policy. This is why they work so hard to keep it an abstraction.

Because Abort73 actively advocates the position that abortion is immoral and unjust, many charge us with being biased. But is Planned Parenthood less biased? Is it just a coincidence that, of the women Planned Parenthood "counsels," there are more than 80 abortions for every one adoption?!8 Is it unreasonable for the National Council on Adoption—which takes no position on abortion—to point out that "many women would not choose abortion if there were better pregnancy counseling"?9 It's understandable that Planned Parenthood would actively promote abortion—since abortion makes them hundreds of millions of dollars a year—but how can they possibly get away with calling themselves objective and unbiased?

Whereas Abort73 does everything we can to consider, respond to, and refute the claims of our ideological opponents, Planned Parenthood simply pretends that the debate doesn't exist. In the counseling portion of their website, they make no mention of the fact that a significant portion of the global population has grave ethical concerns about abortion. Instead they ask leading questions like, “Am I ready to be a parent” and “What would it mean for my future if I had a child now?” Their overly-pragmatic query list never asks, “Am I morally comfortable ending the life of an unborn child that is already here?”

Planned Parenthood is a government-supported, non-profit organization that has a strangle-hold on the mainstream perception of abortion. Thank God for the internet. Seriously. Where else can marginalized viewpoints so effectively circumvent the traditional obstacles of the politically-correct establishment? Never before has there been such a remarkable outlet for widely communicating those points of view that would otherwise be censored and silenced. At the end of the day, even if you disagree with the conclusions that Abort73 comes to, don't both sides of this debate deserve a hearing? Or should women only hear from those who have a financial interest in convincing her to abort?

If Abort73 brings a bias to the table, it is not without basis. Our bias, if you want to call it that, is built on a straightforward examination of the evidence. We have never "forced our morality." We appeal to reason—not coercion, and the reason we can't be more "neutral" about abortion is because neutrality on this issue is an impossibility. The "neutral" position—which holds that the law should allow people to make up their own minds—assumes that abortion is a legitimate moral choice. In other words, the only way to be neutral about abortion is to believe there is nothing wrong with it. You can no more be neutral about abortion than you can be neutral about slavery or segregation. If abortion were more broadly covered in the classroom or community, there would be no need for a resource like Abort73. Since it isn't, there is. If you doubt that, take a look at the abortion section of the Planned Parenthood website. You might be surprised by how vacuous it actually is.