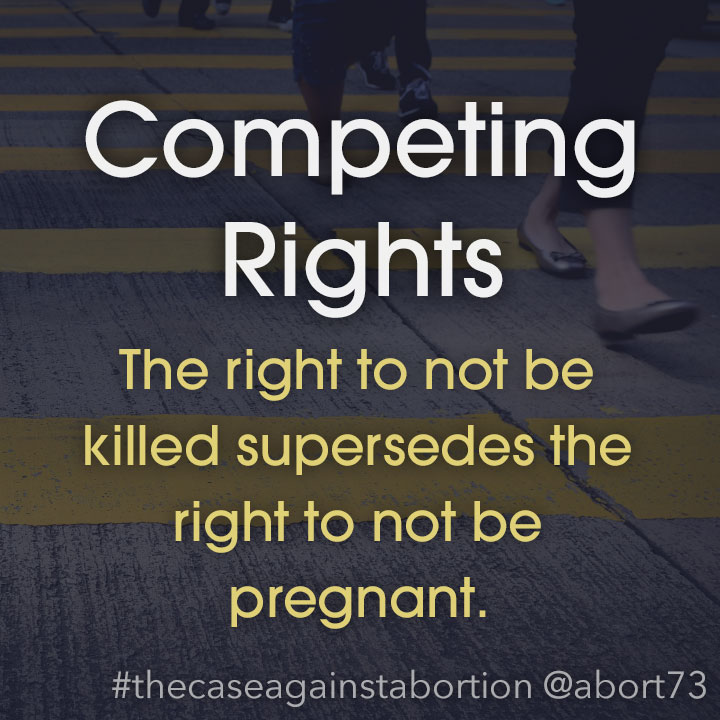 Politically speaking, abortion is an issue that involves competing rights. On the one hand, you have the mother's right to not be pregnant. On the other hand, you have the baby's right to not be killed. The question that must be answered is this. Which right is more fundamental? Which right has a greater claim? Abortion advocates argue that outlawing abortion would elevate the rights of the unborn child over and above those of the mother. "How can you make a fetus more important than a grown woman?" they might ask. In reality, outlawing abortion wouldn't be giving unborn children more rights than the mother, it would simply protect for them the one right that no one can live without—the right to life.

If a baby is not to be aborted, then the pregnant mother must remain pregnant. This generally requires of her sickness, fatigue, reduced mobility, an enlarged body, and a new wardrobe. Fortunately, it is not a permanent condition. On the flip side, if a pregnant woman is not to be pregnant, her child must be killed—unless the baby is old enough to survive outside the womb. Abortion costs the unborn child his or her very life, and it is a thoroughly permanent condition. This is what's at stake for the two parties most directly involved. It is not an issue of who is more important, but rather who has more on the line.

Any time the rights of two people stand in opposition to each other, the law exists to protect the more fundamental right. We see this all the time. For example, if a car is driving down a street while someone is crossing that street, the law requires the driver of the car to slow down and stop—giving up their right to drive where they want, when they want, and at what speed they want—so that the pedestrian may cross the street in front of him. Why? Why must the driver temporarily give up his right to drive down the street just because someone else is walking across the street? Why is the right of the man on foot upheld while the right of the man in the car is denied? It is not because the pedestrian is more valuable than the driver but rather because, if the driver doesn't stop, the pedestrian will likely be killed. In order for the driver to proceed down the street at full speed, at that moment, it will cost the pedestrian his life. In order for the pedestrian to finish crossing the street, at that moment, it will cost the driver a few minutes of drive time. The autonomy of the driver must be temporarily suspended to protect the life of the pedestrian. Though a pregnant woman gives up far more than a few minutes of drive time, she gives up far less than the baby—who would otherwise be killed.

In 1971, Judith Jarvis, an American moral philosopher and abortion advocate, published what some call "the most widely reprinted essay in all of contemporary philosophy." A Defense of Abortion concedes that fetuses should be recognized as persons under the law, but argues that "the right to life consists not in the right not to be killed, but rather in the right not to be killed unjustly." Jarvis then offers her "violinist argument" as an example of a situation in which most people would recognize the moral justice in allowing an innocent human being to die.

The example goes something like this. A pregnant woman is comparable to someone who has been kidnapped in her sleep by a fictitious music lovers society, so that her kidneys can be used against her will to sustain the life of another person. The embryo or fetus is comparable to a world-famous violinist, who is unconscious, who suffers from a fatal kidney ailment, and whose life can be sustained only by being "plugged in" to the kidnapped woman. Pregnancy is comparable to the nine months in which the music lovers society is forcing this woman to remain in bed, plugged into the violinist, until he is sufficiently recovered to survive on his own.

What's the point of this rather bizarre analogy (besides putting us on our guard against predatory music societies)? The point is to show that if it's reasonable for a kidnapped woman to prevent an unconscious violinist from using her kidneys, then it must be equally reasonable for a woman to end her pregnancy through abortion. Jarvis is arguing that even though the embryo or fetus is a living human being, it may be justly killed because it is "using" its mother's body against her will—just as the world-famous violinist did. Here are some of the more obvious problems with her logic:

The demands of pregnancy are real and significant, but they are temporary, they are on behalf of a helpless child, and they are perfectly natural. Moral philosophers can scheme to their hearts content, but it doesn't change the fact that abortion permanently takes away the most fundamental right of an innocent human being. And we're not talking about a disconnected stranger who has trespassed against the woman. We're talking about her very own child.

It may be true, in normal circumstances, that parents have an obligation to give up certain rights for the sake of their children, but a woman who has been raped, or a woman who can't even afford to take care of a child, is perfectly justified in having an abortion.

To learn our response, continue to the next page: Common Abortion Fallacies