Abort73.com > The Case Against Abortion > A Future Lost

Like any act of homicide, abortion steals from its victims their future life. 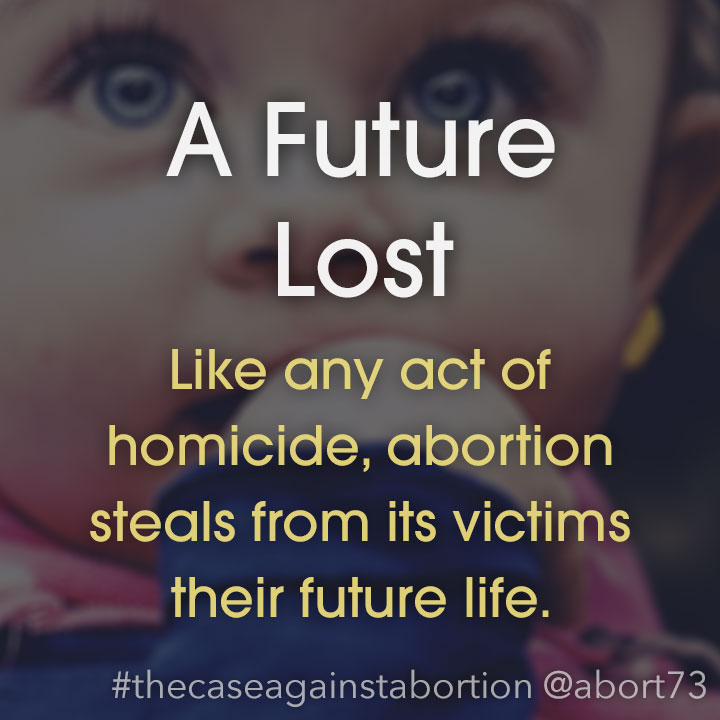 One of the things that makes the death children such a unique tragedy is the fact that it "steals" from them the future life that should have been theirs. Nobody loses more of their future than children who are killed in the womb.

Abortion is as divisive a topic as any in the world. Part of the disparity owes to simple ignorance. Because so many people are unfamiliar with the basics of prenatal development and the mechanics of abortion, they wind up with opinions that are based largely on assumption and hearsay. A basic introduction to the biological facts can clear away much confusion, but it cannot guarantee consensus in the end. There are plenty of people on both sides of the abortion debate who know the science very well—but have come to opposite conclusions.

Those who oppose abortion emphasize the fact that it kills an innocent and helpless human being. Their moral conclusion is built on a biological categorization. It goes like this: Because the embryo or fetus is categorically human, abortion is categorically immoral.

Those who support abortion emphasize the fact that it kills a developmentally-primitive human being, one that lacks the psychological properties (reason, mentation, self-awareness, etc.) most associated with members of the human species. Their moral conclusion is built on a psychological categorization. It goes like this: Because the embryo or fetus is not rational or autonomous, abortion is categorically amoral.

In some measure, both positions rely on presuppositions. Abortion opponents begin with the supposition that all human life is valuable; abortion advocates begin with the supposition that only rational, sentient human life is valuable. These are the value judgments underlying the two positions, but how do we know which one to embrace? Perhaps we should approach this philosophical impasse from an entirely different direction.

Don Marquis, a philosophy professor at Kansas University, wrote an article titled “Why Abortion is Immoral” for The Journal of Philosophy. Instead of basing the morality of abortion on either of the above categorizations, he suggests that we come at it from within a larger discussion on the ethics of killing. That is, before we make any moral decisions about abortion, we should ask: what makes killing wrong in the first place? Approaching the question from an entirely secular point of view, Marquis arrives at the following conclusion:

Marquis warns that describing this tragedy merely as the "loss of life" can be misleading since it is not primarily the loss of biological life that makes killing wrong. It is the effect that this loss has on the victim's future personal life. Their premature death, whether caused by homicide or disease, costs them not only the things they value now, but also everything they will come to value in future. It is the loss of future experiences, more than past memories, that the victim is most deprived of.

The reason Marquis makes the loss of future experiences the basis for his condemnation of killing, rather than functional characteristics like rationality or sentience, is because it is the only framework he can find to fit all the variables. As he notes, "personhood theories of the wrongness of killing cannot straightforwardly account for the wrongness of killing infants and young children."2 It is precisely on this account that abortion advocates like Peter Singer have come to publicly support infanticide. They simply have no basis for morally distinguishing it from abortion.

By contrast, the position Marquis posits gives secularists a means of condemning infanticide, without having to cast aside their utilitarian understanding of "personhood." The future of a newborn baby is valuable, even if that baby has no capacity to value it at the time. To illustrate, Marquis references people who attempt suicide but are successfully rescued and rehabilitated. Their future is ultimately valuable to them, "even though such futures do not seem to be valuable to them at the moment of attempted suicide."3 In other words, the value of a future is not directly tied to one's immediate perception of it, or lack thereof.

Turning now to the issue of abortion, there is only question that must be answered. Do embryos and fetuses have a valuable future—a future like ours? No matter how broadly you define human being, or how narrowly you define "personhood," the answer to that question should be immediately obvious. Here is Dr. Marquis' conclusion, in true philosopher-speak:

The future of a standard fetus includes a set of experiences, projects, activities, and such which are identical with the futures of adult human beings and are identical with the futures of young children. Since the reason that is sufficient to explain why it is wrong to kill human beings after the time of birth is a reason that also applies to fetuses, it follows that abortion is prima facie seriously morally wrong.4

This is a more succinct summation: "Since a fetus possesses a property, the possession of which in adult human beings is sufficient to make killing an adult human being wrong, abortion is wrong."5 Notice that this conclusion was arrived at without any appeal to divine authority or biological categorization, nor does it matter whether we characterize embryos and fetuses as persons or potential persons. The result is still the same.

It is also worth noting that this future-focused framework helps explain why the death of a young child is so much more grievous than the death of an old man. Part of our grief owes to the fact that young children are helpless and dependent, qualities which embryos and fetuses have in even greater measure, but most of it owes to the fact that their entire future has been taken from them. Think about that. The younger you are when you die, the more of your life you lose. That is true for children who are killed on the playground and for children who are killed in the womb.

Your argument may be logically sound, but it remains one opinion among many. It's impossible to know with any certainty which position is right.

To learn our response, continue to the next page: The Uncertainty Principle