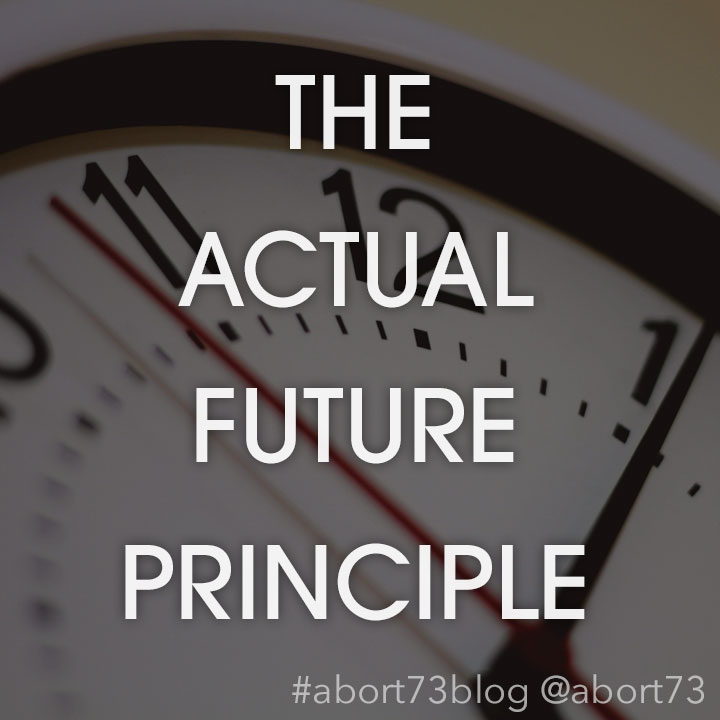 Some years ago, Elizabeth Harman, who is now a philosophy professor at Princeton University, formulated what she calls the "Actual Future Principle" in a paper she published in defense of abortion. I was directed to that paper this week and asked to comment on it.

The basic, philosophical tension that Harman addresses is the competing intuitions abortion-rights advocates often feel in regard to the moral status of a human fetus. In the context of unwanted pregnancy, they see the fetus as morally inconsequential, but in the context of wanted pregnancy, they see the fetus as morally significant. This tension, she says, causes some to erroneously shy away from a "very liberal" view on the morality of abortion because they believe all fetuses must share the same moral and legal status. Here enters her Actual Future Principle (AFP).

But before we get there, I was a bit perplexed by one of her foundational assertions—namely that the AFP principle provides a necessary means of morally distinguishing between a wanted fetus and an unwanted fetus. If only our society was as intellectually consistent as Harman gives us credit for! In truth, we have been content to live with all sorts of moral inconsistency when it comes to abortion. Since 1973, U.S. abortion law has been built on a schizophrenic duality that confers legal protection to some fetuses but withholds it from others—even though they are developmentally identical. In that sense, the courts have long embraced the conclusions of AFP, though I doubt they would endorse the rationale. In her own words, this is how Elizabeth Harman defines the Actual Future Principle:

That's it. And if you find it a rather absurd premise, you've got plenty of company—even amongst the pro-choice community. On the one hand, Harman's argument seems so silly that I don't know how beneficial it is to even address. On the other hand, references to AFP can be found in numerous academic journals on abortion. Because of her position at Princeton, Harman's paper bears more weight than the ideas alone would normally merit. As such, I've decided to formulate a brief response.

You may have noticed that in Harman's definition, she uses the term "early fetus"—a term she employs throughout the paper but leaves intentionally undefined. This designation is built on her assumption that there is a period of time in human development when human beings have no intrinsic value. This period "may be as short as a few weeks," she says, "or as long as several months." But here again, she doesn't say what it is that suddenly gives a human being intrinsic moral value. She suggests that "conscious experience" is a plausible line of demarcation, but recognizes that consciousness may not be achieved until sometime after birth. Though she admits the arguments she makes about "early fetuses" can be equally applied to older fetuses and newborns (as argued by her Princeton colleague, Peter Singer), Harman insists that her paper was "not written with such applications in mind."

The real problem with her formulation is that it's morally useless. She claims to have discovered a mechanism for distinguishing between "two significantly different kinds of early fetuses," but her reasoning is entirely circular. For a woman contemplating an abortion, AFP says to her, "You are perfectly justified in killing your fetus because your fetus 'has no moral status.'" If the pregnant woman asks in response, "But how do I know my fetus has no moral status?," AFP answers, "Because your fetus is going to be killed." Do you see the problem? This kind of logic doesn't solve anything.

Harman raises and purportedly answers three objections to her theory, but she does a much better job anticipating the objections than she does in answering them. The first objection she identifies goes like this:

Facts about a fetus's actual future can't determine its moral status, because something's moral status is determined by its "nature."

In response, Harman answers that she is determining a fetus' moral status by its nature but argues that its present nature is determined by the intrinsic properties it will have in the future. So if a fetus will die before gaining intrinsic moral properties of its own (like consciousness), then it should be categorized as a fetus that has no moral status. Fetuses that do have moral status, she believes, only have it because they will have intrinsic moral properties in the future. This framework of course leads directly to the next objection she addresses:

If the Actual Future Principle is true, then inaccessible facts determine a fetus's moral status. We can't ever know how to treat an early fetus, because we can't be sure of its moral status.

To this, Harman answers that even though we can't know, we can take a good guess, and that's all we're morally accountable for. "Whenever a woman is sure that she is going to abort her early pregnancy, and the means to have an abortion are within her reach," Harman writes, "we can be confident that the early fetus lacks moral status." If she ends up not having an abortion, it just means that "something we thought lacked moral status in fact had moral status." Oh well, but for the fact that this line of thinking is remarkably similar to something Harman called "metaphysically absurd" just a page before. The reason she believes AFP is superior to a similar tenet she calls the Mother's Intention Principle is because AFP is based on an actual future result, not on the changing whims of the mother. "The Mother's Intention Principle must be rejected," Harman says, "because the intentions of the woman who carries a fetus… are not among the facts that can determine what kind of thing it is." To demonstrate, she gives the not uncommon example of a woman who goes back and forth about having an abortion. After arguing that the moral status of the fetus can't change from day to day based on the fluctuating opinion of the mother, Harman then argues that the intention of the mother is a reliable barometer for determining what the fetus' actual future will be. In answering the first objection, she notes that abortion decisions tend not to be set in stone. In answering the second objection, she assumes that they are.

To this objection, Harman simply concedes—at least in part. "The objector is right," she says, "'you just can't lose' if you have an abortion." But beware if you choose not to abort! "While there is nothing wrong with having an abortion on a whim," Harman counsels, "there is something gravely wrong with allowing a pregnancy to continue without moral deliberation." And there you have it. Clearly, this is the conclusion Elizabeth Harman had in mind from the beginning, and she worked backwards in an attempt to find its justification. But in the end, Harman assumes the point she set out to prove, which is what most abortion-rights advocates do—no matter how cleverly they package their arguments.