Abort73.com > Bringing an End to Abortion > Is Abortion Ever Justified?

Is Abortion Ever Justified?

A moral examination of the "life of the mother" exception. 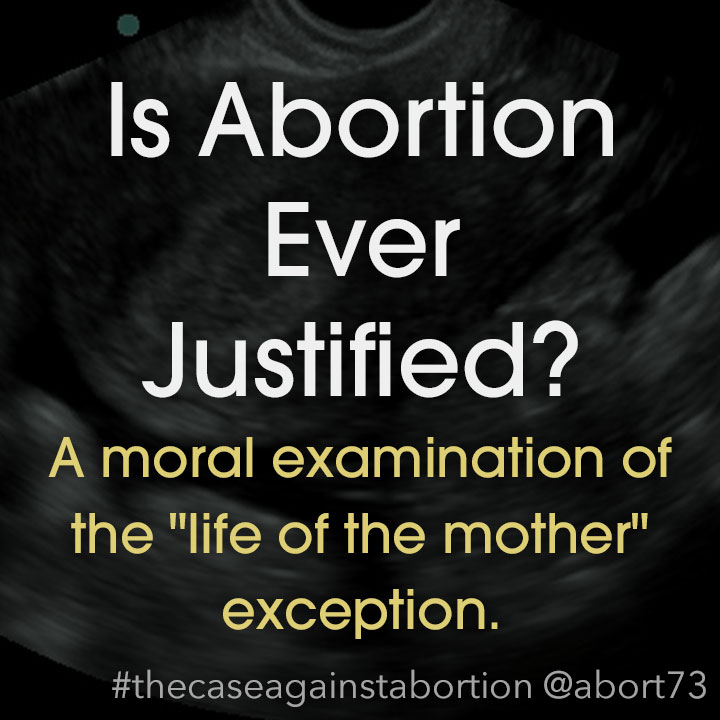 If continued pregnancy threatens the life of the mother, and there is no way to save the child, an ethical case can be made for the justifiability of abortion—whether you want to call it abortion or not.

Of all the circumstantial variables you can attach to the abortion question, none is more ethically challenging than when the life of the mother is threatened by continued pregnancy. Before sorting through the ethics of the matter, we would do well to first lay out some context:

As an overarching principle, when the life of the mother is threatened by continued pregnancy, everything possible should be done to save both the mother and the child. During the second half of pregnancy, the pregnancy can often be ended prematurely by inducing labor and using aggressive neonatal care to sustain the life of the child outside the womb.

When pregnancy endangers the life of the mother during the first half of pregnancy, the most ethical course of action is much harder to pinpoint. Here's the tension. The fundamental reason that abortion is condemnable is because it kills an innocent human being. What do you do, then, when the existence of one human being, through no fault of their own, threatens the life of another human being? Do you end the life of the child, to save the life of the mother? This is the dilemma we face. Philosophically, we might justify the decision to abort a life-threatening pregnancy this way:

A) If the pregnancy continues, the mother will die. If the mother dies, the child will die.

B) If the pregnancy is ended through abortion, the child will die, but the mother will live.

Though such thinking may be ethically sound as it applies to the hypothetical conditions above, real-world circumstances are never so cut and dry. Quite simply, statement A is flawed. We can say with certainty that if the mother dies, the child will die, but we can never say with certainty that if the pregnancy continues, the mother will die. In order to be accurate, the beginning of Statement A would need to be re-rendered as such:

A) If the pregnancy continues, the mother might die...

There is a huge difference between "will" and "might," and this is where it gets sticky. Does the morality of aborting a life-threatening pregnancy depend on the severity of the threat to the mother? Is it a matter of percentages and probability? In the United States, the overall pregnancy-related mortality rate is .0151% (15.1 deaths per 100,000 live births), this according to data published by the Centers for Disease Control (CDC) in 2012.4 In other words, for every pregnancy-related death, there are 6,622 live births. Pregnancy, by its very nature, carries the risk of death. It is generally an infinitesimally small risk, but a risk nonetheless. Is a .0151% risk to the life of the mother severe enough to morally justify abortion? What if the risk to her life were 1%, or 10%, or 50%? What if there was a 90% chance the mother would die? Is that enough of a threat to justify abortion?

At this point, we would do well to get as specific as we can. What are the real-world first-trimester scenarios in which continued pregnancy poses a legitimate threat to the mother's life? Really, there is only one: ectopic pregnancy, a condition that occurs when the embryo implants in the fallopian tubes (or in the ovary, abdomen, or cervix) instead of in the uterus. It has been generally reported and generally believed that an ectopic pregnancy is always fatal to the child and, if left untreated, often fatal to the mother. For instance, WebMD says this of an ectopic pregnancy:

Percentages are hard to come by, but the BBC News piece on one of the successful deliveries listed above reports that the baby had a 5% chance of survival, while there was a 10% chance that the mother would die.6 A 2003 Canadian Broadcasting story on the successful delivery of an ectopic pregnancy in Canada quotes Dr. Robert Sabbah as saying that the baby only had about a 1% chance of survival.7 Without question, the odds of survival for ectopic babies are extremely slim, but it has happened. The question then becomes: How severe a threat does an ectopic pregnancy actually pose to the mother, and is it reasonable to suggest she put her life on the line, when there is such a painfully small chance that her baby will survive? A report on ectopic pregnancy published by the American Academy of Family Physicians (AAFP) tells us a number of things:8

1) Ectopic pregnancy occurs at an estimated rate of 19.7 cases per 1,000 pregnancies in North America. Though this rate was arrived at by analyzing data from 1990–1992, a 2012 CDC report cites that it is still the most reliable in existence.9

3) To date, at least 14 studies have documented that 68 to 77 percent of ectopic pregnancies resolve without intervention.

The first thing to note is that a significant majority of ectopic pregnancies are never treated, somewhere between 68–77%. In most of these cases, the embryo miscarries without medical intervention and the pregnancy ends without further incident. If we split the difference between between 68% and 77%, we get 72.5%. Using the AAFP estimate that there are 3.8 maternal deaths per every 10,000 ectopic pregnancies, and assuming that all of the deaths occurred to women who received no medical intervention, we can say that there are 3.8 deaths for every 7,250 (10,000 x 72.5%) untreated ectopic pregnancies—putting the likelihood of maternal death around .05%.

In light of this data, it becomes clear that even an untreated ectopic pregnancy is not generally fatal. Nevertheless, the risks of continuing an ectopic pregnancy are real, and the baby's chance of survival are almost nonexistent. The American Association of Pro-Life Obstetricians & Gynecologists (AAPLOG) goes so far as to say, "Continuation of [an ectopic] pregnancy cannot result in the survival of a baby and entails a very substantial risk of maternal death or disability."14 Though they're not being totally honest in asserting that it is "impossible" for a baby to survive an ectopic pregnancy, you get the point. The prospects for survival are not good. AAPLOG also notes that by the time an ectopic pregnancy is discovered (usually by 7 to 8 weeks gestation), "the embryo has (already) died in the majority of cases."15 This may simplify the ethics of medical intervention, but even when the embryo is still alive, AAPLOG unequivocally recommends removing the embryo by medical or surgical intervention. The process is always fatal to the embryo, and though such treatment bears procedural similarities to abortion, it must viewed through an entirely different lense. The death of the embryo or fetus is the sole purpose of an elective abortion. It is the undesired and unavoidable result of surgically or medically treating an ectopic pregnancy. For these reasons, AAPLOG "does not consider treatment of ectopic pregnancy by standard surgical or medical procedures to be the moral equivalent of elective abortion, or to be the wrongful taking of human life."16

Some anti-abortion groups argue that the removal of the fallopian tube is the only ethical way to treat ectopic pregnancy, but this approach does far more damage to the mother's body and still results in the death of the baby.

This page was last updated on February 06, 2020. To cite this page in a research paper, visit: "Citing Abort73 as a Source."