Abort73.com > Finding Help > If You’ve Had an Abortion

If You’ve Had an Abortion 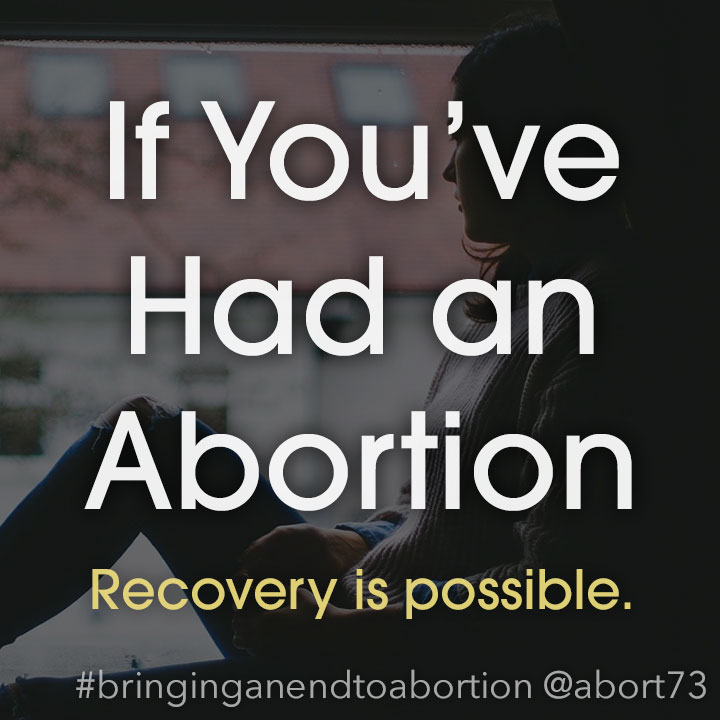 Abort73 is an educational resource–not a counseling center. But we can point you to ministries whose sole focus is to help people find healing after abortion, and we can tell you the relatively simple message upon which all true recovery is built: Christ died for sinners.

Feelings of guilt are a miserable and glorious thing, excruciating to bear, but profoundly valuable for what they communicate. They tell us something is wrong, they scream at us that we need to be healed. Guilt is to the soul what physical pain is to the body. We can fight against it (to our own peril!) and pretend that nothing is wrong, or we can listen and seek restoration. We would do well to listen.

While secular reasoning can show us that abortion is unjust, it can do nothing to restore a guilty soul. At the end of the day, humanism is an empty system. It has no answer for guilt, other than to ignore it or pretend it doesn't exist. Psychiatrists may tell you to learn to forgive yourself, but that's like putting a band-aid on cancer. The problem goes much deeper.

The only reason that abortion is wrong, the only reason murder is wrong, the only reason rape and assault are wrong is because human beings are created beings (Genesis 1:27), created by a God who has authority over us and who has communicated the standard by which we are to live (2 Timothy 3:16). And not only has God communicated His expectations through the written word, but also through the internal mechanics of the human conscience. The law of God is written on our hearts, and when we violate that law, we feel it (Romans 2:14-15).

If there were no God, there would be no guilt. If we were truly the random and accidental result of natural processes, there would be no moral authority on our life, there would be no right and wrong. You could murder and pillage to your hearts content and nothing would condemn you. This is evolutionary principle, and while many endorse it in theory, no one can live with it in practice. It is an absurdity. Human beings are not mere animals, we are not amoral beings. We know this from God's Word, and we know this from the internal gnawing of our own soul.

For everyone who has had an abortion, there is only one path to true restoration. It is not in forgiving yourself (something for which you have no authority to do), it is in receiving the forgiveness of God. Since abortion destroys the work of God, it is God alone who can forgive the sin of abortion (or any other sin). While such forgiveness is possible, it does not come cheaply. The wages of sin is death (Romans 6:23). This is what's at stake. We are not just condemned to feelings of guilt (which could be dealt with by suppression), we are condemned to death, and not just physical death, eternal death (Matthew 18:9)! Since God is perfectly just, He cannot leave the guilty unpunished (Exodus 34:7). Therefore, forgiveness can only come if the death we owe is paid by another (Hebrews 9:22). There is only one Man in all of human history who is sufficiently qualified to pay the death we owe. There is only one Man who did not owe a death Himself and could therefore be a substitute for us (Hebrews 4:15). That Man is Jesus Christ, God in human flesh (1 Timothy 3:16).

This is the gospel. The kingdom of heaven has come to earth! The righteousness of Christ is credited to the account of all of us who are united to Him by faith, while our collective unrighteousness is credited to Him and paid for by His death on the cross (I Peter 3:18). The substitutionary death of Jesus Christ is the only means by which God can justly forgive all of us who have trampled upon His glory (Romans 3:26), and the resurrection is our proof that Jesus has conquered death on our behalf (Romans 6:8-9). There is forgiveness in nothing else (Acts 4:12).

We have all treated God's glory as though it were less valuable than our own private preferences, whether it be through abortion or through anything else. We are all equally condemned, we are all equally deserving of death, but we are all offered the same opportunity to be forgiven. How do we receive it? By turning from our sins of the past, confessing that they are wretched and putting all of our hope in Jesus Christ. If you confess Jesus with your mouth, and believe with your heart, His righteousness becomes yours (Romans 10:9).

Pastor John Piper tells us that, "No one is cut off from Christ because of past sin - any past sin. What cuts a person off from Christ and the fellowship of his people is the endorsement of past sin. For the repentant there is forgiveness and cleansing and hope." II Corinthians 7:9-10 reads as follows:

Reconciliation to God, through the blood of Jesus Christ, is the only way to overcome the guilt of abortion, and though the sorrow of past sins can linger, the penalty will be forever lifted. If you have received this forgiveness, let the world know, and be a voice of warning about the miseries of abortion. Your testimony can make all the difference in the world to those who come behind!

This page was last updated on November 18, 2019. To cite this page in a research paper, visit: "Citing Abort73 as a Source."