Abort73.com > Bringing an End to Abortion > Marketing Past the Stereotypes

Marketing Past the Stereotypes

Change is possible, but it takes creativity to get past the baggage. 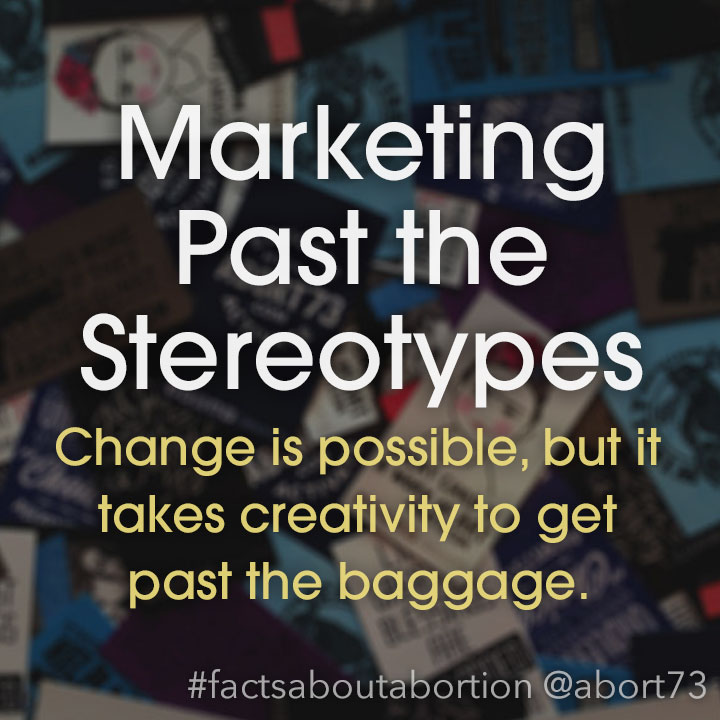 There are two primary obstacles to making the case against abortion. The first is financial; the second is ideological. Whereas the abortion industry has a built in cash cow, abortion opponents must stretch their marketing dollar. Add to that the negative stereotypes that are often attached to "anti-choicers," and the task at hand becomes a challenging one.

No matter how compelling the case against abortion, it will never change any minds until it finds an audience. Compiling the evidence is only half the battle—the easy half. Finding an effective way to put that evidence in front of large numbers of people is much harder. Traditionally, for a message to make any cultural headway, it must have the backing of significant cash reserves or a sympathetic press corps. The case against abortion has neither. Thankfully, these traditional barriers are rapidly being done in by the world wide web. Never before has there been such a remarkable outlet for putting marginalized viewpoints in front of the masses.

Though the internet is a natural fit for the case against abortion, there is still the issue of actually gaining an audience. Websites have theoretical access to an entire world of people, but must compete with billions of other sites for their attention. In the case of abortion, gaining an audience can be even harder since there is so much baggage tied to this issue. How many people are naturally inclined to subject themselves to an ethical analysis of such a controversial issue? Since Abort73 lacks the financial backing or political connections to embark on a more traditional advertising blitz, and since we've tied ourselves to a cause with all sorts of negative connotations, we've embraced a decidedly untraditional strategy for making the case against abortion.

It starts with the name Abort73.com, which is an intentionally vague URL. Though conventional wisdom recommends a more descriptive moniker, that wasn't our goal. Why? Because we're fighting against misconceptions and complacency. Many people have stereotyped opposition to abortion as mere religious fanaticism. Many others have no desire to involve themselves in such a divisive issue. For all of these people, a more descriptive name would likely keep us from ever getting a hearing. To help avoid that, we chose a URL that communicates very little. We're trying to prompt the question, "What is Abort73.com?!" That's the first challenge, getting people in. The second challenge is to keep them there long enough to convince them that abortion is a historic injustice that concerns all of us.

So what does the name Abort73 actually mean? The connection becomes more clear after watching the video January 1973. We took the word "abortion" and shortened it to "abort"—which can either mean to have an abortion or terminate an operation or procedure. Next, we took the year in which the U.S. Supreme Court struck down all state prohibitions against abortion, 1973, and shortened it to "73." When put together, you can look at the name in two ways. Either it is an abbreviation of Abortion 1973, or it is a resource to help "abort" (terminate) the fallout of that 1973 verdict. Both work, and both were in view when the name was chosen.

While Abort73 offers a broad, abortion education to people of all ages, we are the most anxious to reach students and young adults. Young people tend to be more open-minded, more willing to change their mind, and less likely to have a personal stake in justifying abortion. Plus, more than half of all abortions are performed on women younger than 25. Changing the way America thinks about abortion begins with changing the way American students think about abortion. If we had more in the advertising budget, we would undoubtedly find new ways to spend it, but for the time being, we don't. Even if we could afford a big-budget ad campaign, there's no guarantee that anyone would sell us the ad space. Until this becomes a popular message amongst the powers that be, change must come from the bottom up.

Abort73 Gear
Abort73 shirts, hats, bags, stickers, notebooks and more all put the name Abort73.com in the public sphere. Though finances and ideology prevent us from having a formal presence on public high schools and universities, giving students a variety of low-cost ways to advertise Abort73 makes it possible to still have a massive campus impact. And it need not be limited just to campuses. These resources can also influence the community at large. Even if you're not a T-shirt wearer, do you ever take a travel mug or water bottle to work? Does your car have a bumper? How about putting an Abort73 poster on your dorm room wall? There are lots of simple ways to partner with us in introducing those around you to Abort73.com!

Virtual Abort73 Marketing Resources
Because Abort73 provides a web-based education, web-based resources are a great way to market that education. Our Instagram, Facebook, Twitter, YouTube, Pinterest, and Flickr accounts all provide unique opportunities for users to connect their friends to Abort73. Our YouTube videos can easily be added to your own page, and full-resolution versions of our videos can be freely downloaded from our website—perfect for class or group presentations. Abort73 web graphics can be added to your profile or website in all sorts of places and each one points people to Abort73.com. Click here for more ways to promote Abort73 online.

Abort73 Handouts
Abort73 pens, promo cards, flyers, and free downloadable flyers are all designed to be given away. For anyone wearing an Abort73 shirt, keep some pens or promo cards handy to give away whenever someone asks you about Abort73. It will help them remember the URL. For a broader impact, take a stack of promo cards and strategically leave them behind in public places, or run off a bunch of copies of our downloadable flyers and post them on campus bulletin boards. If you're a student, how about setting up an actual campus distribution with pens, flyers, or promo cards? All of these products are available in bulk at very reasonable prices. With a little courage and creativity, just a few students can have a significant campus impact.