One in 167: The Unique, Prophetic Place of Abort73 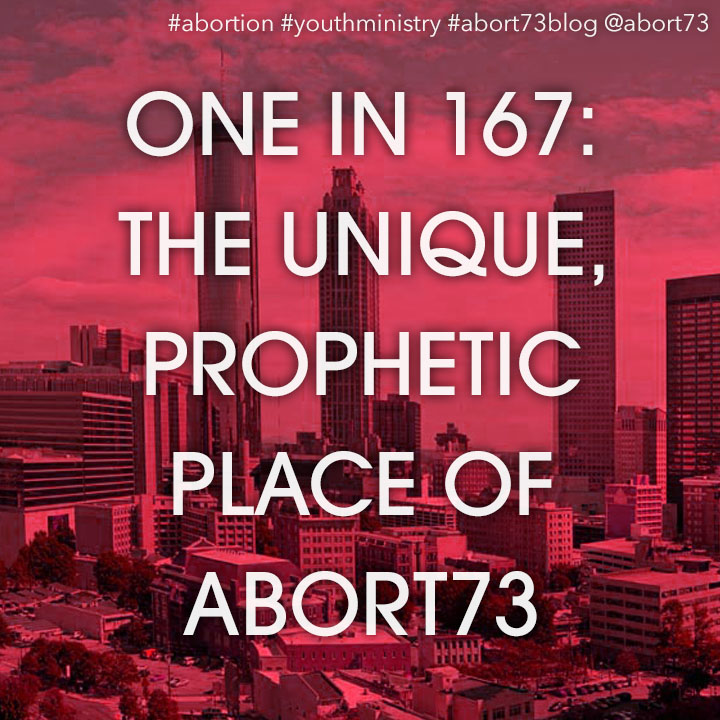 I spent last weekend in Atlanta for the National Youth Worker's Convention (NYWC). I didn't get to attend any of the sessions, but I'm glad I was there. I'm glad Abort73 was there. According to the conference program, Abort73 was one of 167 exhibitors – not including Youth Specialties, who sponsored the event and easily filled as much space as another 20-30 exhibitors combined. It was a massive production that dwarfed anything I've been a part of to date. As I walked around the conference book store, I was overwhelmed by the number of youth-ministry-related books and resources that I'd never heard of. Information overload is an understatement! I don't know how many of the roughly 5,000 youth workers in attendance were more familiar with the resources being offered than I was, but the vast majority of them had never heard of Abort73, which is why I'm so glad we were there. It was a good reminder that we still have a lot of ground to cover in terms of basic ministry recognition and awareness.

I also noticed that of the 167 ministry exhibitors, there were 47 that coordinated mission trips. Another 26 represented camps or conference centers. There were 24 Christian schools in attendance and 18 exhibitors that offered youth-ministry-related training resources. Fourteen ministries were devoted to combatting poverty, hunger, or slavery. Eight exhibitors specialized in graphic design. Eight more offered services related to ministry logistics. Five were built around regional service projects, and three were entertainment venues. The rest of the exhibitors included a Christian speakers bureau, a ministry focused on teen depression and suicide, an insurance company, a Christian humor company, and a Christian hip-hop theater. There was one ministry, Exodus International, that focused on the issue of homosexuality. Abort73 was the only exhibitor to focus on the issue of abortion. To everyone who thinks the church is hyper-obsessed with gay-marriage and abortion, the NYWC exhibit hall painted a very different picture.

The relative insignificance of abortion was even more apparent when it came to the speakers. Not one of the more than 150 sessions was devoted to the subject. I realize there is much more to youth ministry than teaching students about abortion, but consider that there were no fewer than 16 sessions devoted to media (using Photoshop, editing videos, designing T-shirts, using iPads in ministry, etc). Other sessions included: Retreat Planning, Fun and Games, Utilizing Technology to Maximize Your Ministry, Keeping Students Engaged, Using Photography for Activism, Crafting Internships that Matter, Creating an Online Ministry, The Art of Bible Storying, and Large Staff Youth Ministry Leadership. In other words, there were plenty of sessions that veered far from the fundamentals to focus on specific ministry niches. That's not a bad thing, but I would certainly argue that helping youth workers understand how to deal with the abortion issue is far more important than many of the peripheries that received more prominent treatment. Of all people, I can appreciate the value of creating engaging, visually-compelling media, but when you have 16 sessions teaching youth workers how to better "brand" their youth ministry and not one equipping them to teach their students about abortion, that's a problem.

I realize that it's entirely possible that some of the speakers did talk about abortion during their sessions. There were two sessions focused on social justice and two more focused on sex. I hope that abortion was discussed in these contexts, but I wouldn't be surprised if it wasn't. And I would be very surprised if it received anything more than a passing mention. I've witnessed similar omissions on several occasions, and here's the problem. When abortion is not mentioned in the context of global, systematic injustice, it reinforces the growing notion that abortion is a secondary issue – one that progressive Christians should no longer bother themselves with. When abortion isn't mentioned in the context of teen sexuality, it creates a church culture that is more concerned about the immorality of premarital sex that it is about the injustice of abortion. And when students are saturated with warnings against sexual engagement, but know almost nothing of abortion, guess what many of them do when they find themselves pregnant? Relevant magazine ran an article in their September/October issue titled: (Almost) Everyone's Doing It. The subtitle reads: "A surprising new study shows Christians are having premarital sex and abortions as much (or more) than non-Christians." It's not that these Christians are unaware that God forbids sex outside of marriage. They know that, but do it anyway – on the sly. And if pregnancy threatens to publicly expose what had heretofore been a private sin, abortion starts to look very good. Unlike many of their secular peers, Christian students are expected to be abstinent. Unwed pregnancy carries more shame for them than it does for the population at large, which is why Christian students may be even more inclined to have an abortion, as a way of covering their tracks. The solution is not to minimize God's expectation that we abstain from sex outside of marriage. The solution is to provide students with a better understanding of what abortion is and does so if they find themselves in a crisis pregnancy, they don't exponentially add to their sin by killing an innocent human person.

For many student ministries, creating cool videos or graphics is a huge priority. Providing students with an accurate, biblically-informed understanding of abortion is not a priority. But that can change. Some youth ministries intentionally avoid the abortion issue (I heard recently from a high school pastor at a Methodist church who is not allowed to publicly criticize abortion), but most are guilty of a less egregious form of neglect. I asked some of the pastors who stopped by the Abort73 table whether they've ever talked to their students about abortion. All but one sheepishly answered "no," and I got the impression that the importance of helping their students understand abortion had never even occurred to them. Of course, I was right there with them just a short time ago. I came to faith through a large, vibrant, Bible-saturated high school ministry. I was as involved as you could possibly be for four years, and to my memory, we were never taught about abortion from the pulpit – which is probably why I went through high school and college thinking abortion wasn't that big a deal. I know the leaders in my high school ministry were not abortion supporters, and I'm sure they weren't intentionally avoiding the subject. It simply wasn't on their ministry radar – which brings me back to the unique and prophetic work of Abort73. Not only are we working to educate individuals about the injustice of abortion, but we are also trying to awaken churches to the importance of not leaving this issue by the wayside.

Here's how you can help. A copy of our Biblical Mandate booklet was included in the registration packs for all 5,000 in attendance at the NYWC. Pray that they'll be read. Pray that God will use my story to help nurture a love for abortion-vulnerable children in the hearts of high school pastors across the country. And at your own church, make sure that those who lead the high school and college ministries are aware of Abort73. Humbly, graciously ask them if they've ever taught their students about abortion. If they haven't encourage them to do so. Point them to our Student Ministries page. I've already seen countless others go from indifference to passionate engagement. Sometimes it just takes a loving nudge.