Abort73.com > The Case Against Abortion > Abortion and Race 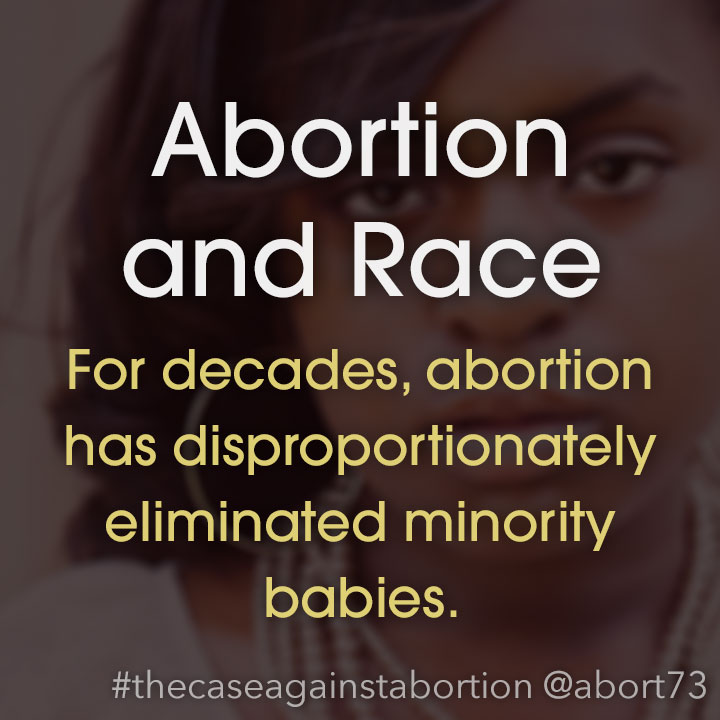 In America today, the average black woman is almost five times more likely to have an abortion than the average white woman.1 Part of this disparity owes to the fact that, statistically, black women get pregnant more frequently than white women,2 but even if we control for pregnancy, black babies are still more than three-and-a-half times more likely to be aborted than their white counterparts.3 No matter what your opinion of abortion, the fact that it disproportionality eliminates members of the minority community is a significant sociological problem.

Here’s what it looks like by the numbers. According to the latest census estimates, just over 13% of the U.S. population is black,4 and yet somewhere between 28-38% of all U.S. abortions are performed on black babies. The Guttmacher Institute puts that number at 28%, based on voluntary 2014 survey data from 8,380 respondents.5 The Centers for Disease Control (CDC) places the number at 38%, based on actual counts of every 2016 abortion performed in the 30 states/districts that collect and report abortion data by race.6 By comparison, non-Hispanic white women make up 60% of the population but account for only 35-39% of all abortions.7

Among black women, the current abortion ratio is 401.8 That means there are 401 abortions for every 1,000 live births. Statistically, 29% of black pregnancies end in abortion (excluding miscarriages). Among white women, the abortion ratio is 109—which means less than 10% of white pregnancies end in abortion.9 The current abortion rate among black women, which is the number of abortions per 1,000 women of reproductive age is 25.1.10 That means that in 2016, 2.5% of black women, aged 15-44, had an abortion. By comparison, only 0.67% of white women of reproductive age had an abortion that year.11

In 2018, approximately 2,400 human beings lost their lives to abortion each day in the United States.12 On average, 19% were Hispanic, 38% were black, and 35% were white.13 That translates to approximately 456 Hispanic children, 912 black children, and 840 white children. Though the white population in the U.S. outnumbers the black population by more than four to one,14 abortion kills more black children each day than it does white children. In fact, abortion claims virtually the same number of black lives each year in the United States as all other causes combined.15

Though the black population in America grew by 12% between 2000 and 2010, the U.S. Census Bureau reports that the black population "grew at a slower rate than most other major race and ethnic groups in the country."16 CBS News reported in 2009 that "Hispanics have surpassed blacks as the nation's largest minority group."17 Can there be any doubt that abortion has significantly impacted this demographic shift? Despite similar population numbers, Hispanic women account for approximately 19% of U.S. abortions whereas African-American women account for up to 38%.

The CDC reports that during the 1970's, roughly 24% of all U.S. abortions were performed on black women.18 That percentage rose to 30% in the 1980's, 34% in the 1990's, 36% throughout the 2000's and now sits at 38%.19 That means that roughly 32% of all U.S. abortions since 1973 have been performed on African American women. Based on the January 2020 estimate that there have been 61.6 million abortions in the United States since 1973,20 we can deduce that almost 20 million of them were performed on black babies. As of July 2019, the black population in the U.S. stood somewhere around 44 million,21 which means that abortion has reduced the size of the black community by more than 30%—and that doesn't include the children and grandchildren that would have been born to those aborted more than a generation ago.

Recognizing that abortion disproportionately impacts minorities is one thing. Understanding why is quite another. According to a 2017 Pew Research survey, there is not much of an ideological divide between blacks and whites when it comes to abortion. Though a black woman is up to five times more likely to have an abortion than a white woman, she is only .002 times more likely to support abortion as a matter of public policy.22 And though black women are more than twice as likely to live in poverty than white women, their poverty levels are relatively comparable to Hispanic women.23 In both cases, the disparity in income doesn’t match the disparity in abortions—which tells us that something beyond ideology and economics is at work here.

Some suggest that the reason black women have a much higher rate of abortion is because the abortion industry has strategically targeted them. Life Issues Institute reports that a majority of Planned Parenthood’s abortion clinics are within walking distance of minority communities.24 The Guttmacher Institute insists that most of Planned Parenthood’s abortion clinics are in neighborhoods with a white majority.25 Since each is saying a slightly different thing, it’s fair to say that the data is inconclusive. That being said, successful businesses place their products within easy reach of their primary customers, and Planned Parenthood runs the most successful abortion business in the country. We can argue as to whether their geographic placement creates the demand for abortion, or whether the demand for abortion determines their geographic placement, but it’s almost certainly a little of both. That’s how businesses operate in the real world. John Piper, a white pastor with a heart for racial justice, recognizes that the rationale for placement is less important than the result:

The de facto effect—I don’t call it the main cause, but net effect—of putting abortion clinics in the urban centers is that the abortion of Hispanic and Black babies is more than double their percentage of the population... Call this what you will—when the slaughter has an ethnic face and the percentages are double that of the white community and the killers are almost all white, something is going on here that ought to make the lovers of racial equality and racial harmony wake up.26

The fact that black leaders like former President Barack Obama support abortion does not change the reality of what is happening. How many candidates for public office have abandoned a prior conviction so as to be consistent with a party platform? This is perhaps nowhere more evident than in Reverend Jesse Jackson's flip-flop on abortion. Prior to having ambitions as a Presidential candidate for the Democratic Party, he was an eloquent and outspoken opponent of abortion. Though his public stance on abortion has reversed, his earlier remarks remain as applicable as ever, and show that there is more than mere numbers at stake. The following remarks come from his 1977 article for the National Right to Life News:

The question of abortion confronts me in several different ways. First, although I do not profess to be a biologist, I have studied biology and know something about life from the point of view of the natural sciences. Second, I am a minister of the Gospel and, therefore, feel that abortion has a religious and moral dimension that I must consider. Third, I was born out of wedlock (and against the advice that my mother received from her doctor) and therefore abortion is a personal issue for me...

Another area that concerns me greatly, namely because I know how it has been used with regard to race, is the psycholinguistics involved in this whole issue of abortion. If something can be dehumanized through the rhetoric used to describe it, then the major battle has been won. Those advocates of taking life prior to birth do not call it killing or murder, they call it abortion. They further never talk about aborting a baby because that would imply something human. Rather they talk about aborting the fetus. Fetus sounds less than human and therefore can be justified...

Functionally-speaking, support for abortion has always depended upon the dehumanization of its primary victim—unborn children—and there is strong evidence that dehumanization is always and intrinsically unjust. Ironically, it was the mainstreaming of birth control that paved the way for abortion-on-demand, but whereas birth control was sold as a means of preventing the unwanted and "unfit" from being conceived, abortion now eliminates them after they’re already here. You might say that abortion is a manifestation of the worst forms of cultural bigotry. It is racist, in disproportionally eliminating minorities. It is sexist, in disproportionally eliminating girls, and it is classist in disproportionally eliminating the poor. Alveda C. King, daughter of slain civil-rights leader A.D. King and niece of Martin Luther King, Jr., quotes her uncle often when outlining her opposition to abortion. She writes:

[Martin Luther King, Jr.] once said, “The Negro cannot win as long as he is willing to sacrifice the lives of his children for comfort and safety...” How can the “Dream” survive if we murder the children? Every aborted baby is like a slave in the womb of his or her mother. The mother decides his or her fate.28

The Negro cannot win as long as he is willing to sacrifice the lives of his children. Do you feel the tension in that statement? There is a sense in which the black community is being victimized by abortion violence, and there is a sense in which the black community is perpetuating abortion violence. Abortion, you see, is a form of self-immolation. It is racism, perpetrated against one’s own race. It is sexism, perpetrated against one’s own sex, and it is classism, perpetrated against one’s own class. In theory, every mother who has an abortion does so willingly and without compulsion. In practice, this is almost never the case. As Frederica Mathewes-Green speculates, “[A woman] wants an abortion as an animal, caught in a trap, wants to gnaw off its own leg.”29 She says that not to justify abortion, but to point out that it is a violent and desperate attempt at self-preservation, which leaves its survivors permanently damaged. Every abortion is violent and fatal, but its incommensurate impact on minority children and minority communities should deeply trouble us all.

Continue to the next page: Abortion and Gendercide