Abort73.com > Abort73 Blog > Eulogy for the Martyred Children: What MLK Has to Teach Us About Abortion

Eulogy for the Martyred Children: What MLK Has to Teach Us About Abortion 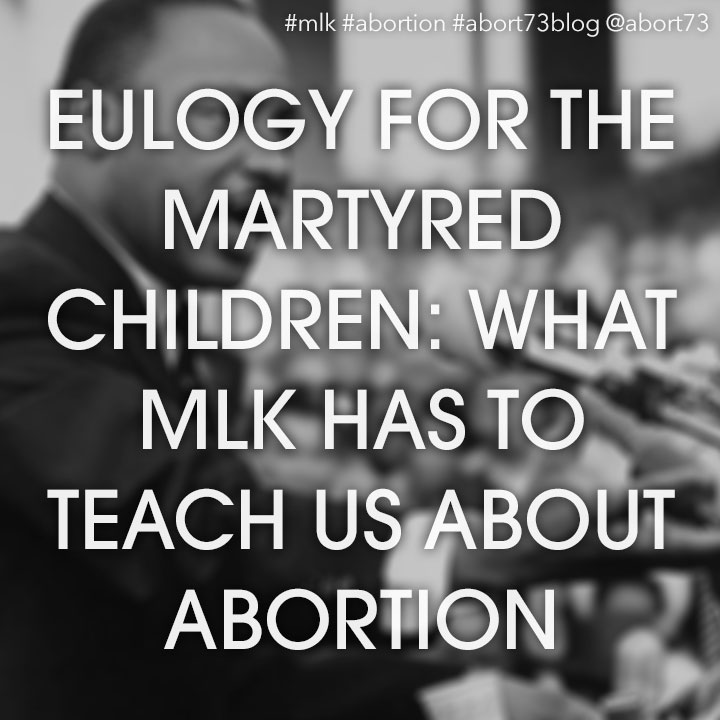 Yesterday seemed a good day to revisit my copy of A Testament of Hope: The Essential Writings and Speeches of Martin Luther King, Jr. Included in Part II (Famous Sermons and Public Addresses) is his "Eulogy for the Martyred Children"—delivered at the funeral for the young girls murdered in the 1963 bombing of Birmingham's 16th Street Baptist Church. Two years ago, I spent a weekend in Birmingham, AL and attended the Sunday-morning service at 16th Street Baptist Church. I entered alone with a bit of trepidation. For all its historic significance, it remains a relatively small congregation, and I stood out like a sore thumb. I was underdressed and under-pigmented (ie the only white person in attendance), but that visit was easily the highlight of my trip. I don't know that I've ever been so moved by prayer or singing, and the sermon did not disappoint.

The first thing to strike me about Dr. King's 16th Street memorial address was the title given to his sermon: "Eulogy for the Martyred Children." By definition, a martyr is someone who "willingly suffers death" rather than renounce a "religion" or "belief." Strictly speaking, that's not what happened on that tragic Sunday morning in Birmingham. Addie Mae Collins (14), Cynthia Wesley (14), Carole Robertson (14) and Denise McNair (11) were not killed for their religion or beliefs. They were killed for the color of their skin. And they did not die for any professed allegiance to the civil rights movement. They died without warning because a bomb blew up in their Sunday School class.

I make this distinction not to criticize Dr. King's assertion that these girls were martyrs, but to point out that it was a martyrdom wholly beyond their control—which makes their deaths even more tragic. "These children," Dr. King notes, were "unoffending; innocent and beautiful." In life, they were unnoticed on the national scene. In death, King asserts, they have something to say to everyone. And the first audience he addresses is not the KKK, but rather "every minister of the gospel who has remained silent behind the safe security of stained-glass windows." Continuing, he declares that the deaths of these four girls comdemn "every Negro who has passively accepted the evil system of segregation and who has stood on the sidelines in a mighty struggle for justice." Finally, their deaths say to each of us, "black and white alike… that we must be concerned not merely about who murdered them, but about the system, the way of life, the philosophy which produced the murderers."

Dr. King knew that culpability for this crime went well beyond the men in white hoods who detonated the bomb. In large measure, this crime was only possible because of the silence of the church and the unwillingness of decent people to publicly challenge an unjust system. And so it is with abortion. But this reality did not leave Dr. King in despair; it simply drove him deeper into the faith that sustained everything he did. He continues:

…in spite of the darkness of this hour we must not despair. We must not become bitter; nor must we harbor the desire to retaliate with violence. We must not lose faith in our white brothers. Somehow we must believe that the most misguided among them can learn to respect the dignity and the worth of all human personality.

Here again, the connection to abortion is a powerful one. As Dr. King said some years earlier in his "American Dream" speech, "moral ends" can only be achieved through "moral means." Why? Because "the end is preexistent in the means." Elsewhere in that speech he makes a few more observations that are well worth considering by anyone who sees a connection between the children martyred by the KKK in 1963 and the children martyred by abortion today. Addressing the 1961 graduates of Lincoln University, King tells them:

What a remarkable thing that one of our greatest American heros, a man lionized by virtually all sectors of society, was so unapologetically religious. What are politically-correct historians to do with a man like that? MLK spoke of America as a schizophrenic personality—one that "proudly professed the principles of democracy," but practiced the "very antithesis." I suppose our historical treatment of Martin Luther King, Jr. exhibits much the same schizophrenia. As we increasingly mock biblical conviction and increasingly demand that religion not influence public policy, we still manage to celebrate the life of a humble Christian minister who changed the world by refusing to keep his religion private.