Abort73.com > Bringing an End to Abortion > What About Illegal Abortions?

What About Illegal Abortions?

If abortion is outlawed, will thousands of women die in the "back alley"? 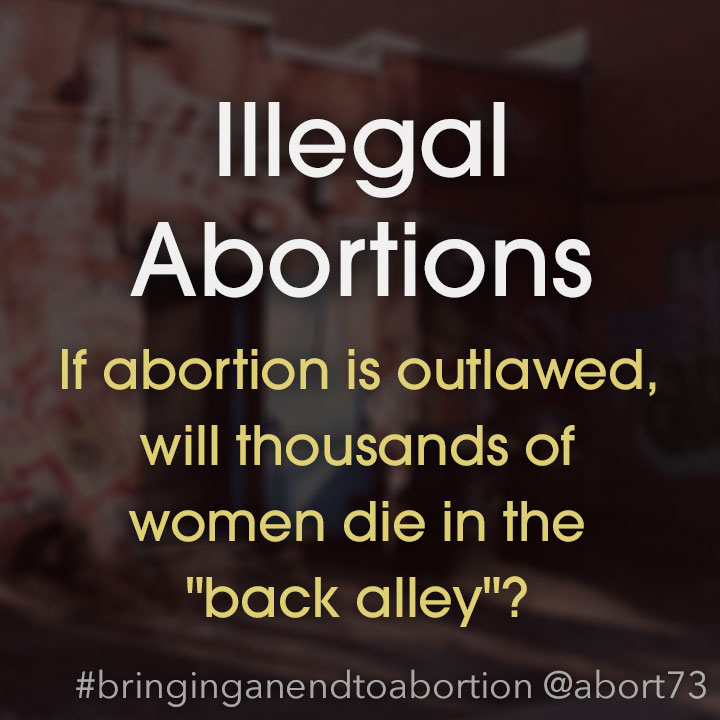 Some justify abortion on the claim that if it is outlawed, women will abort anyway and may die in the process. There are three problems with this hypothesis. First, it doesn't address the ethics of abortion. Second, laws against abortion would deter most women from having one. Third, there is no evidence that illegal abortions are more dangerous than legal abortions.

The wire coat hanger has long been a prop of "choice" for those staging abortion-rights rallies or protests. You see them on signs and buttons or hanging around necks to symbolize the idea that women will die en masse if they ever lose the legal right to kill their unborn offspring. The first problem with this line of defense is the fact that it has nothing to do with the ethics of abortion. It makes no attempt to justify the act of abortion; it simply argues that if women can't abort legally, they'll abort illegally and die in the process. Those who make such an argument conveniently ignore the fact that abortion itself kills a living human being, not by accident but by design. It is nonsensical to argue that society must keep it safe and legal for one human being to kill another human being—especially when the one being killed is both innocent and defenseless.

The second problem with the coat hanger argument is that it assumes that the legality of abortion does not influence a woman's willingness to have an abortion. This is simply not true. External restrictions have a huge impact on abortion frequency. The Centers for Disease Control (CDC) tells us that "from 1970 through 1982, the reported number of legal abortions in the United States increased every year."1 If the legality of abortion didn't influence a woman's willingness to choose abortion, we wouldn't have seen such a massive increase in abortion frequency during the years following its legalization. More recently, the National Abortion Federation (NAF), which maintains that "women resort to induced abortion irrespective of legal restrictions,"2 provides more examples of how influenceable a woman's decision to abort actually is. Consider:

The third problem with the coat hanger argument is that it has no solid historical basis. The late Dr. Bernard Nathanson cofounded the National Abortion Rights Action League (NARAL) and helped legitimize the claim that 10,000 women were dying each year from illegal abortions prior to the passage of Roe vs Wade. Before his death, Dr. Nathanson admitted that the number was completely fabricated for PR purposes. He writes in his exposé Aborting America:

How many deaths were we talking about when abortion was illegal? In N.A.R.A.L., we generally emphasized the drama of the individual case, not the mass statistics, but when we spoke of the latter it was always "5,000 to 10,000 deaths a year." I confess that I knew the figures were totally false, and I suppose the others did too if they stopped to think of it. But in the "morality" of our revolution, it was a useful figure, widely accepted, so why go out of our way to correct it with honest statistics? The overriding concern was to get the laws eliminated, and anything within reason that had to be done was permissible.7

Dr. Christopher Tietze, then acting as the chief statistician for Planned Parenthood and the Centers for Disease Control, also addressed the exaggerated claim of 5,000 - 10,000 abortion related deaths per year. He wrote in a 1969 edition of Scientific America:

Some 30 years ago it was judged that such deaths (from illegal abortion) might number 5,000 to 10,000 per year, but this rate even if it was approximately correct at the time, cannot be anywhere near the true rate now. The total number of deaths from all causes among women of reproductive age in the U.S. is not more than about 50,000 per year. The National Center for Health Statistics listed 235 deaths from abortion in 1965. Total mortality from illegal abortions was undoubtedly larger than that figure, but in all likelihood it was under 1,000.8

Finally, the coat hanger argument fails to recognize that the increased "safety" of abortion in modern times owes not to its legality, but to improved medical technology. Mary Calderon, former director of Planned Parenthood, estimated in a July 1960 article from the American Journal of Public Health that 90% of all illegal abortions were performed by licensed physicians in good standing. She writes the following:

Abortion is no longer a dangerous procedure. This applies not just to therapeutic abortions as performed in hospitals but also to so-called illegal abortions as done by physicians. In 1957 there were only 260 deaths in the whole country attributed to abortions of any kind. In New York City in 1921 there were 144 abortion deaths, In 1951 there were only 15; and , while the abortion death rate was going down so strikingly in that 30-year period, we know what happened to the population and the birth rate. Two corollary factors must be mentioned here: first, chemotherapy and antibiotics have come in, benefiting all surgical procedures as well as abortion. Second, and even more important, the conference estimated that 90 percent of all illegal abortions are presently being done by physicians. Call them what you will, abortionists or anything else, they are still physicians, trained as such; and many of them are in good standing in their communities. They must do a pretty good job if the death rate is as low as it is...abortion, whether therapeutic or illegal, is in the main no longer dangerous.11

The National Abortion Federation affirms Calderon's conclusions in their 2009 teaching text on abortion. They write:

The above statements from the NAF make an abundance of things clear. First, the relative safety of abortion for the mother depends more on equipment and technique than it does on legality. Second, the future of illegal abortion is not surgical but medical. Women won't be bleeding in the back alley from a punctured uterus. Third, since surgical abortions are performed with the same equipment that is often used to treat spontaneous fetal demise, physicians willing to perform illegal abortions will already have the necessary tools on hand. There is no reason to believe that illegal abortion will be significantly more dangerous for the mother than legal abortion. In the end, the back-alley coat-hanger abortion is little more than a convenient myth aimed at sparking emotions and arousing public sympathy. If abortion is outlawed in the future, some abortions will still take place, but relatively few will be fatal to the mother. If abortion remains legal, however, millions of innocent human beings will continue to die—a trade-off that is both tragic and unjust.