If abortion is murder, should aborting women be tried as murderers? 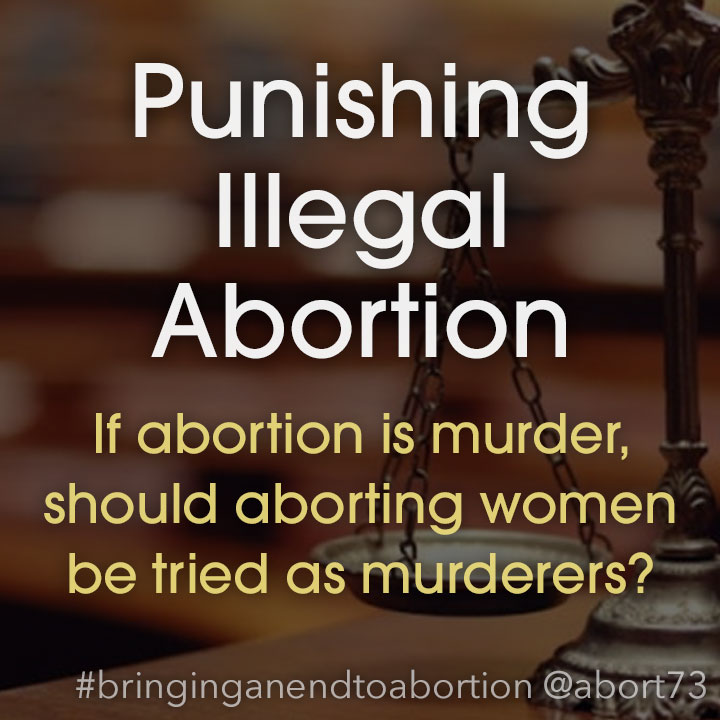 Should abortion be outlawed in the future, the question of appropriate criminal punishment becomes a fairly difficult one. Though a satisfactory answer can be hard to come by, there are both philosophic and pragmatic reasons for granting the aborting mother immunity.

If abortion is outlawed, should aborting women be tried as murderers? Some people ask this question in good faith, but many employ it as a trap—designed to discredit those who oppose legal abortion. If you answer “yes,” you appear calloused towards women who are generally more desperate than malicious. But if you say “no,” you’re charged with not really believing that abortion is murder. It’s not unlike the quandary presented in the gospel of John, when Jesus is disingenuously confronted with a woman caught in adultery. The Pharisees who dragged her in didn’t really care about justice; they just wanted to make Jesus look bad—by forcing him to either forsake the law or forsake the lawbreaker. As per usual, he did neither.

Though none today can credibly claim divine discernment, we would do well to employ some of the same tact. But first a disclaimer. The difficulty of appropriately punishing abortion doesn’t make the act itself any more tenable—or the legislation against it any less justified. The morality of abortion depends upon whether or not it kills an innocent human being, not on how adept its opponents are at proposing a befitting system of recompense. A failure to clearly articulate how abortion should be punished does not mean that someone’s opposition to abortion is misplaced. Determining that abortion is unjust is the easy part; figuring out how to legislate against it is decidedly harder.

With regard to the punishment of abortion, history does offer some precedent. Lest we forget, legal abortion is a modern aberration. Prior to 1970, elective abortion was against the law everywhere in the United States—as it was throughout the United Kingdom prior to 1968. Some will argue that explicit abortion codification didn’t first appear until the 1800’s, but this ignores a number of crucial realities. One, abortion was not a mainstream practice before this point.1 Two, abortion was not legal after quickening—which was the only point at which pregnancy could be definitively confirmed.2 Three, the public’s “indifference” to pre-quickening abortion was built almost entirely on ignorance.3 Four, the most popular abortion methods of the time were only marginally effective.4 Five, those with the clearest grasp of prenatal development—medically-trained physicians—were vehemently opposed to abortion before and after quickening.5

In America, the first recorded instance of an abortion-related conviction occurred in 1652—more than 120 years before the United States even existed.6 Though, abortion was not specifically prohibited in colonial America, neither was infanticide, and the Hippocratic Oath had already been prohibiting abortion for some 2,000 years. Marvin Olasky points out in his book Abortion Rites that "the impulse of short-sessioned early nineteenth-century legislatures was to pass laws only when necessary, and generally only after near unanimity was achieved.”7 More to the point, the practice of abortion as we know it today was developed less than a century ago—in communist Russia and communist China.8 Premodern abortion techniques were notoriously unreliable and dangerous, both of which served as built-in deterrents. It was only when abortion became a more common problem that the law began to more explicitly intervene.

In the 1652 abortion case already referenced, Captain William Mitchell forced his bondservant, Susan Warren, to drink “a potion designed to produce abortion” after impregnating her on a voyage from England to Maryland.9 It almost killed her, before she eventually gave birth to a stillborn child. Since it couldn’t be proved that the abortifacient had killed the child, Captain Mitchell was not imprisoned—but he was fined 5,000 pounds of tobacco, stripped of his government position, prohibited from holding public office in future, and dispossessed of Miss Warren’s services.

Though the case of Captain Mitchell predated any formal abortion prohibition by almost 200 years, the precedent it established was remarkably prescient. In colonial America, abortion wasn't so much a means of liberating women as it was a means of liberating the men who impregnated those women. Oftentimes it was quite-literally forced upon them. And while it's true that women came to play a more active role in procuring abortion over time, the law’s reluctance to charge them remained—for two reasons.

First, abortion is a crime for which there is almost never a witness beyond those directly involved, and the tools used to perform an abortion are the same ones used by physicians in the aftermath of a spontaneous miscarriage. You can see the difficulty then of securing a conviction through a criminal trial. How can the jury be certain that an induced abortion occurred, rather than a miscarriage? Granting the mother immunity to testify against the abortionist is one potential way to overcome this evidentiary hurdle. Call this the pragmatic case for recusing the mother from some or all criminal charges.

Second, it makes sense philosophically to hold the abortionist to a higher legal standard than the mother herself. Even if no one is pressuring the woman into an abortion she doesn’t want, the abortionist will almost certainly have a more sophisticated knowledge of prenatal development—along with a more robust understanding of the legal consequences. Additionally, any mother who is willing to break the law to procure an abortion is likely in a state of extreme emotional duress and reduced cognitive facility, which the abortionist may even play upon for financial gain. Here again, it is the aborting physician—who has sworn an oath to “do no harm”—whose behavior is the more blameworthy of the two. It is the abortionist who bears the most culpability.

The reason that some nations make infanticide a distinct and less-severe crime than murder is not because they believe infants to be less valuable or less human than their older counterparts. It’s because they believe that any mother who intentionally kills her own baby must be suffering from a severe pregnancy-induced mental malady. These women, they believe, are not a threat to the population at large. Even in the United States, where there is no formal distinction between infanticide and homicide, women convicted of killing their newborns—if they have “competent legal representation”— rarely receive sentences of “more than a year or two in prison, with many receiving only probation.”10

We can debate whether or not such punishment sufficiently fits the crime, but the material point is this. Historically, mothers who are convicted of doing fatal harm to their own children are sentenced with far more leniency than a person in any other position would receive. Since the criminal justice system already demonstrates a general unwillingness to severely punish mothers who intentionally kill their born babies—believing their shame, loss, and stigmatization to be punishment enough, there’s no reason to believe that the punishment will be more severe for women who kill their unborn babies.

On this point, we don’t even need to speculate. Six states already have “trigger laws” on the books which would automatically ban elective abortion should Roe vs Wade be struck down.11 The legislation in four of those states explicitly prohibits “the charging or conviction of a woman with any criminal offense in the death of her own unborn child.”12 The other two infer the same thing in singling out the person who prescribes, procures, or performs the abortion as being the one who is guilty of a criminal offense.13 Nine more states have similar legislation in process. Among those nine, only Texas leaves the door open to charging the aborting mother.14

If aborting mothers are not generally to be charged with the crime of abortion, the question then becomes: what kind of punishment should or would the abortionist face? Here again, past and present state laws provide significant insight. Though there’s some state-to-state variation, the most common penalty establishes a maximum punishment of up to 10 years in prison and/or a maximum fine of up to $100,000.15 While these penalties are admittedly less than what would be meted out for someone convicted of premeditated homicide, they are by no means insignificant—or inapropriate. Morally, it is perfectly reasonable to regard abortion as murder, but it would be virtually impossible to prosecute it as such.

Though history demonstrates that it is exceedingly difficult to secure a conviction for the crime of abortion, that doesn’t mean we should give up the effort. The law, even when hard to enforce, goes a long way towards informing public opinion. The American Medical Association’s anti-abortion committee lamented the difficulty of enforcing abortion prohibitions during the latter half of the 19th century, but they found solace in the law’s informative power. “The (mere) existence of a law making [abortion] criminal,” argued committee-member William H. Brisbane, “would have a moral influence to prevent it.” 16 At the very least, outlawing abortion protects a nation from the ignoble distinction of enshrining injustice in law. That in itself is worth celebrating.

To summarize, making abortion illegal will not flood our prisons with post-abortive women—as abortion advocates like to claim. And though it wouldn't eliminate abortion entirely, it would save countless innocent lives. There is established precedent for granting aborting mothers immunity against all or most charges. It is both philosophically and pragmatically reasonable to do so. This does not minimize or negate the barbarism of abortion. Neither is it unreasonable to charge the abortionist with something less than first-degree murder. The more stringent the penalty, the less likely it becomes to secure a conviction. Finally, there is social and educational value in outlawing abortion, even if it is difficult to enforce.