Abort73.com > The Case Against Abortion > Abortion Procedures > Abortion and the Hippocratic Oath

Abortion and the Hippocratic Oath

The original rendering of this historic creed explicitly condemns abortion. 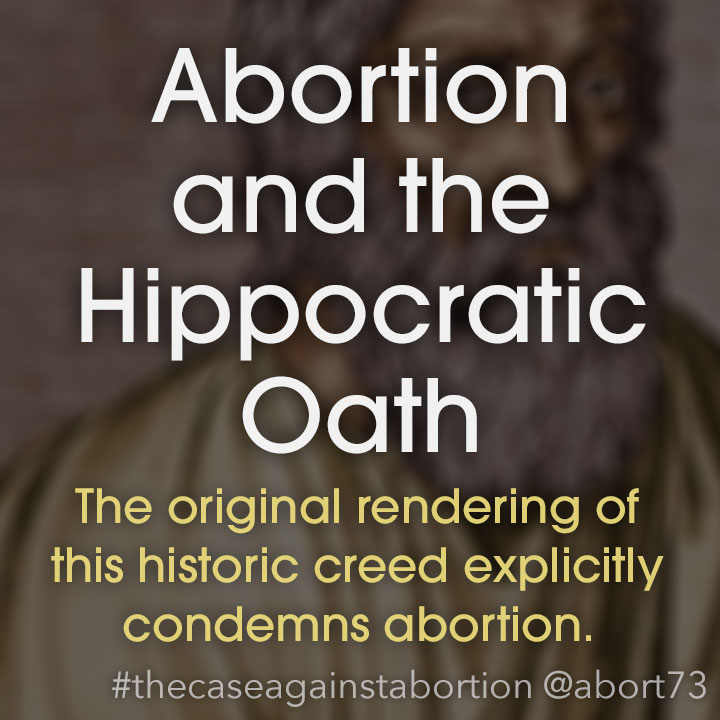 The Hippocratic Oath was revolutionary for its unyielding devotion to the preservation of individual human life. It stood in marked contrast to the more primitive medical traditions that blurred the lines between killing and curing. In its original form, the oath prohibits both euthanasia and abortion.

Opposition to abortion from within the medical community is hardly a modern phenomenon. Though advancing technology has only recently given us clear access to the astonishing development taking place within the womb, doctors have long known that human embryos and fetuses are nothing less than tiny human beings.

In 400 BC—almost 2500 years ago, Hippocrates of Cos, the famous Greek physician dubbed the "Father of Medicine," crafted (by his own hand or through a pupil) what remains the most enduring tradition in all of medical history: The Hippocratic Oath. Variants of the oath, which established basic guidelines for medical ethics, are taken by virtually all graduating medical students.1 In its original form—translated into English, we read the following:

The broader significance of the Hippocratic Oath lay in its unyielding devotion to the preservation of individual human life. Famed American anthropologist Margaret Mead said this of the ancient decree:

For the first time in our tradition there was a complete separation between killing and curing. Throughout the primitive world, the doctor and the sorcerer tended to be the same person... He who had the power to cure would necessarily also be able to kill [but] with the Greeks the distinction was made clear. [Physicians] were to be dedicated completely to life under all circumstances, regardless of rank, age or intellect—the life of a slave, the life of the Emperor, the life of a foreign man, the life of a defective child.3

On the heels of World War II, the Nuremberg Code of Ethics in Medical Research was formed to deal with prosecuting the Nazi doctors who were behind some of the most egregious medical crimes the world had ever known. As an aside, the most notorious of those death camp doctors, Josef Mengele, escaped prosecution by fleeing to South America and spending the 1950's as a clandestine abortionist.4 The Declaration of Geneva, which resulted from the post-WWII assembly, was crafted as a means of bringing the Hippocratic Oath up to date. Included in the original language of that declaration is the following:

I WILL MAINTAIN the utmost respect for human life, from the time of conception; even under threat, I will not use my medical knowledge contrary to the laws of humanity.5

Though the 1948 rendering explicitly precluded abortion, the "conception" clause was quietly removed in 1983—in a clear nod to political expedience.6 Instead of judging the merits of abortion against the established ethical principles of this historic document, the document itself was amended so as to justify abortion. Nevertheless, since human life demonstrably begins at conception, the oath itself was not materially changed. To respect human life in general is to respect human life in the womb. In 1949, the International Code of Medical Ethics was published by the World Medical Association in accordance with the Declaration of Geneva. It established that "A DOCTOR MUST ALWAYS bear in mind the obligation of preserving human life," and specified that human life was to be recognized "from the time of conception."7

Like the Declaration of Geneva, a 1983 amendment to the International Code of Medical Ethics removed the "conception" clause but still maintained a physician's obligation to preserve human life "from the beginning"8—language which survived until 2006.9 Despite modern efforts to narrow the pool of persons protected by these historic creeds, their original intent should be clear. Destroying a human being before or after birth was considered an unconscionable medical paractice, particularly in the aftermath of the Holocaust.

The United States Holocaust Memorial Museum tells us that abortion itself—along with forced sterilization—was part of the Nazi euthanasia program. In camps and ghettos alike, pregnant Jewish women "were forced to submit to abortions."10 Polish, Soviet, and Yugoslav women who were impregnated by their German captors were also forced into abortions if the established "race experts" deemed the unborn child to have too little German blood.11 At Auschwitz-Birkenau, "pregnant women, and young children were immediately sent to the gas chambers."12 Imprisoned Jewish doctor David Klebanov said he was given special treatment by his SS commandant because he "knew how to perform abortions--on women [the German officer] slept with."13

On the other end of the spectrum, women carrying babies of pure German stock could be punished for attempting to procure an abortion.14 The Lebensborn program established homes for the care of German children born out of wedlock, and Nazi soldiers were encouraged to father illegitimate children with unmarried German women.15 Not surprisingly, the general prohibition against aborting German babies had a eugenic exception. Historian Jill Stephenson writes:

The Hereditary Health Court in Hamburg, in a test case in March 1934, gave a judgement which declared — as a matter of fundamental principle — that abortion on grounds of racial health was not an offence. The 'medical indication' had been made a ground for legal abortion in 1927; now the ‘eugenic indication’ permitted the termination of a pregnancy if the health of the nation might be endangered by the birth of an ‘hereditarily unhealthy’ child… The announcement in 1938 that Jews would not be prosecuted if they resorted to abortion since this could only benefit the German people followed the same logic.16

Since abortion was clearly a tool in the Nazi's eugenic arsenal, it's no wonder that both the Declaration of Geneva and the International Code of Medical Ethics chose the language that they did—even in the absence of the technology that has now given us a window into the womb. Unfortunately, these unprecedented technological advances have been accompanied by the same moral laxity that plagued Nazi Germany. Once again, as in the days of Hippocrates, there is an entire subset of medical professionals who have blurred the line between killing and curing. Most of the specific moral pronouncements that were so crucial to the original Hippocratic Oath have been replaced by vague generalities. The most common revision was written in 1964 by Louis Lasagna, and fails to list any of the original prohibitions against euthanasia, abortion, and sexual relations with patients. Nonetheless, the following language is included:

Most especially must I tread with care in matters of life and death... Above all, I must not play at God... I will remember that I remain a member of society, with special obligations to all my fellow human beings, those sound of mind and body as well as the infirm.17

Even without referencing abortion directly, the doctors who take this oath—if they're honest—are still committing themselves to the preservation of human life, which traces all the way back to conception. The fact that countless abortionists have blithely bound themselves to this oath doesn't negate its original intent. We can change the language of historic moral documents—to accommodate an ethically-suspect practice, but we can’t change the morality itself. Simply put, killing an innocent human being is not a morally-acceptable cure to unwanted pregnancy.

This page was last updated on December 17, 2019. To cite this page in a research paper, visit: "Citing Abort73 as a Source."

Continue to the next page: Abortion Pictures