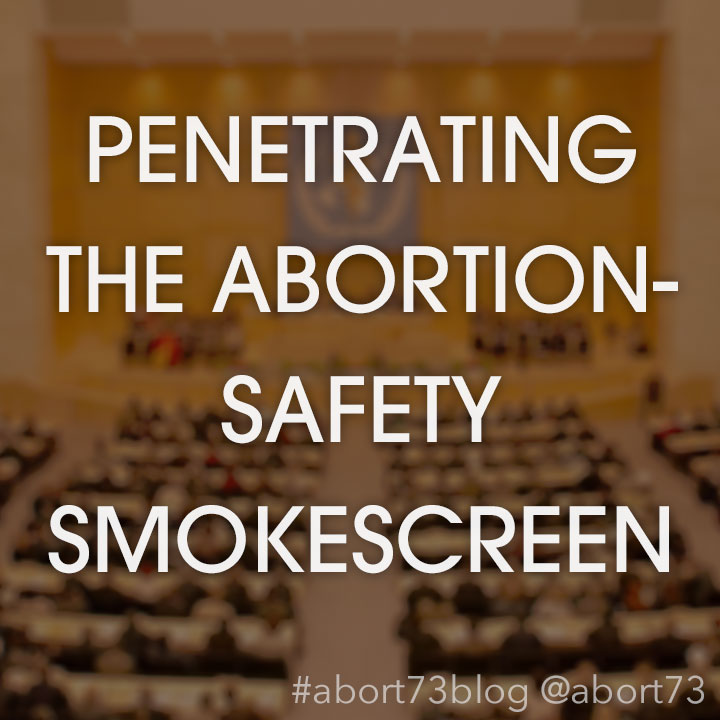 Earlier this fall, The Lancet published a new study on the safety of abortion around the globe. According to their report, approximately 25 million unsafe abortions occur each year, which represents 45% of the estimated worldwide total. Dr. Bela Ganatra, a World Health Organization (WHO) scientist in the Department of Reproductive Health and Research, is the study's lead author. Her bio on the WHO website says that she is "working on preventing unsafe abortion." With the exception of one word, her job description is identical to my own. Dr. Ganatra is working to prevent unsafe abortion; I am working to prevent abortion. Of course, the insertion of that one word—unsafe—places us on opposite ends of the ideological spectrum. For all its talk of prevention, the World Health Organization is dedicated to nothing less than the complete and unequivocal mainstreaming of abortion, as inferred by the conclusion to which the study comes:

Reading that, perhaps you feel I'm overstating WHO's agenda. If an abortion is going to take place, shouldn't it at least be safe? If that's the question you're asking, then you've already been put off the scent. The World Health Organization, along with the entire abortion industry, doesn't want you thinking about abortion in ethical terms. They want you thinking about it in pragmatic terms. They don't want you asking, is abortion wrong? They want you asking, is abortion safe? Is it effectual? If you doubt that WHO is so ideologically committed to abortion, consider the following remarks from their publication, “Safe abortion: technical and policy guidance for health systems:”

To the full extent of the law, safe abortion services should be readily available and affordable to all women.

Regulatory, policy and programmatic barriers that hinder access to and timely provision of safe abortion care should be removed.

The respect, protection, and fulfillment of human rights require that … abortion is safe and accessible.

Health-care professionals who claim conscientious objection must refer the woman to another willing and trained provider… Where referral is not possible, the health-care professional who objects must provide (the) abortion… Health services should be organized in such a way as to ensure that an effective exercise of the freedom of conscience of health professionals in the professional context does not prevent patients from obtaining access to [abortion].

The World Health Organization is as radically committed to abortion as Planned Parenthood. They don’t even recognize a health-provider’s right to conscientiously refrain from destroying unborn children—unless they can find someone else to do it for them. In terms of policy objectives, WHO is indistinguishable from the abortion industry itself, and for as long as there has been an abortion industry, making abortion safe has always been the rationale for making abortion legal.

In large measure, "safe" has become a euphemism for "legal." Though WHO believes abortion to be a fundamental human right that should be globally legalized, they don’t want to be seen as a narrow activist organization. From a PR perspective, campaigning for “safe” abortion is a much safer bet. But what does that mean exactly? What is a "safe" abortion? WHO certainly isn't considering the safety of the helpless human being that is killed, nor factoring in the increased risks of breast cancer, pelvic infection, and infertility. What is it then that makes an abortion safe or unsafe? In years past, WHO made little effort to mask the circular nature of their reasoning, as evidenced by the following—which comes from their most recent report:

From 1990 to 2008, WHO used indirect estimation techniques to determine the incidence of abortion in countries with restrictive laws and in countries with more permissive laws but where a large number of abortions took place illegally. These abortions were labelled as unsafe, and these estimates were integrated with estimates of the incidence of legal abortion worldwide, developed by the Guttmacher Institute.

Do you see what was happening for the better part of two decades?! Since WHO had virtually no factual data with regard to the safety of abortion in countries where it is legally restricted, they simply assumed that any abortions occurring in such locales were unsafe. The same basic concession is made a second time when the report says, "Because of the paucity of data, previous estimates relied on the legality of abortion ... as the primary basis for distinguishing safe from unsafe abortions." This is an admission that goes way beyond confirmation bias—and it actually gets worse. Not only have their published reports on abortion safety been completely speculative, the abortion totals upon which those studies are based are no more objective. As I pointed out in an earlier piece, of the 55.7 million abortions that are estimated to occur each year around the globe, no more than 10% can actually be accounted for. The rest are assumed.

Both the Guttmacher Institute, which began as an offshoot of America's largest abortion business—Planned Parenthood, and the World Health Organization have a nasty habit of assuming the conclusions they're ostensibly trying to ascertain. In order to determine whether the law has any bearing on a woman's willingness to abort, the Guttmacher Institute built their estimation models on the assumption that the law has no bearing on a women's willingness to abort. Likewise, in order to determine whether illegal abortions are unsafe, WHO built their estimation models on the assumption that illegal abortions are unsafe. Do you see how nonsensical all this is?! If you read WHO’s guidelines for abortion safety, you’ll see that they’re all too willing to parrot Guttmacher’s asinine talking points, such as:

Whether abortion is legally restricted or not, the likelihood that a woman will have an abortion for an unintended pregnancy is about the same.

Legal restrictions on abortion do not result in fewer abortions.

I’ve never been a man who yields to vulgar language, but the baldfaced audacity of these particular lies certainly inclines me to call them out for their you-know-what. Both history and common sense reveal that legal restriction has a HUGE influence on a woman’s willingness to abort. Some women will have an abortion whether it’s legal or not, but the vast majority won’t. This tired assertion continues to be trotted out for its ability to squelch all debate on the morality of abortion. Their argument goes like this: Since the same number of abortions are going to occur whether it’s legal or not, we needn’t bother with the dubious ethics of abortion; we can focus all our attention on safety.

In their latest publication, WHO reports that 87.4% of the abortions performed in countries where abortion is legal on request were “safe,” while 74.8% of the abortions performed in countries where abortion is restricted were unsafe. There are two things to note here. First, by WHO’s own admission, “safety” and legality are not synonymous. They deem some 12% of legal abortions to be unsafe and some 25% of illegal abortions to be safe. It’s not the legality of abortion that makes it relatively more or less safe; it’s the overall state of the nation’s health-care system. Abortion is more dangerous in much of the developing world, not because it’s illegal, but because there are fewer medical resources available. Second, even if WHO’s estimation models have improved, they’re still built on an entirely speculative baseline. Nobody knows how many illegal abortions are happening around the globe, though Guttmacher and WHO want us to believe that it’s in the tens of millions. The WHO report continues:

The subregions with the highest proportions of safe abortions (northern Europe and northern America) also showed the lowest incidence of abortion.

The only reason the developed world has a lower incidence of abortion than the developing world is because Guttmacher has arbitrarily declared it to be so. May I remind you again that the supposed abortions that are occurring en masse throughout the developing world are almost entirely speculative. They’re phantom abortions, and yet these phantom abortions have become the basis for a policy push to globally eliminate all abortion restrictions. Insidious, is it not?!

Throughout the body of the WHO study, and the Guttmacher study I referenced before, variants of the same reluctant admission show up: "The paucity of empirical data is a limitation of these findings." That's a fancy way of saying that their studies lack hard evidence. In their words, again, "Empirical data in the model were scarce, particularly from countries where abortion was legally restricted." I’ll leave you with one more telling concession from the World Health Organization:

Although efforts to increase the availability, accessibility, and affordability of contraception can reduce the incidence of unintended pregnancies and, therefore, abortions, it is essential to combine this strategy with interventions to ensure access to safe abortion. Both strategies are needed to eliminate unsafe abortion and to fulfill the global commitment to the Sustainable Development Goal of universal access to sexual and reproductive health.

In other words, birth control and abortion are joined at the hip. Despite the proffered cultural narrative, birth control will never eliminate abortion. It may even fuel it. For the World Health Organization, it’s not about prevention; it’s about promotion. Despite espousing an "ethical and human rights based approach" to reproductive health, WHO believes that all women "including adolescents" should have easy access to abortion—ignoring the fact that abortion is intrinsically unsafe and intrinsically unethical for violating the most basic human right of all. Abortion tears to pieces the most innocent and helpless members of the human community—tiny human persons who literally had the whole of their lives before them. Though the World Health Organization postures itself as an advocate for the marginalized and oppressed, when it comes to abortion, they have aligned themselves firmly with the oppressor.