Eliminating the "unfit" has always been a goal of the abortion industry. 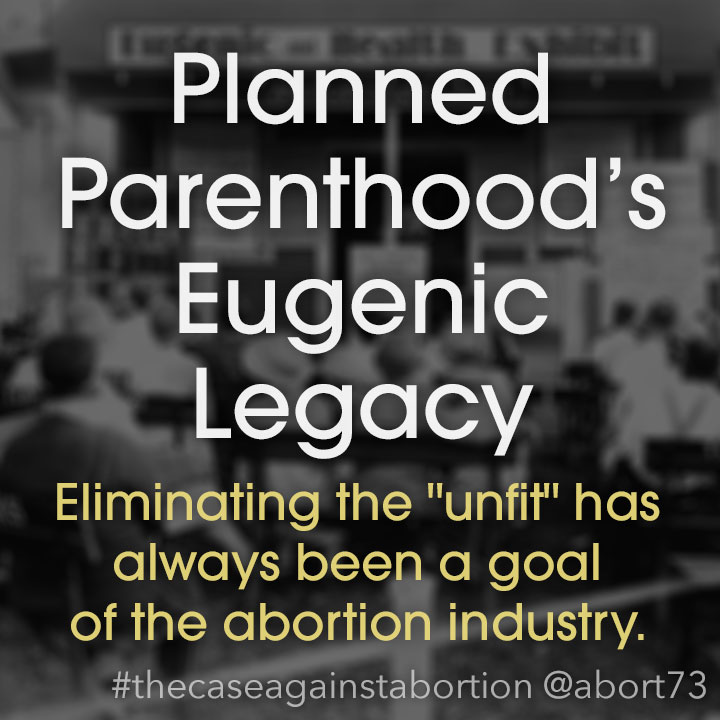 Planned Parenthood, then called the American Birth Control League, once shared office space and board members with the American Eugenics Society. One of their avowed purposes was to improve the human race by preventing the “unfit” from breeding—through birth control and forced sterilization.

Eugenics is commonly defined as, "The study of hereditary improvement of the human race by controlled selective breeding."1 This scientific-sounding definition might seem benign, but eugenic theory has been the foundation for incalculable human suffering. The United States Holocaust Memorial Museum (USHMM) has a portion of its website dedicated to those who were abused and/or killed as a direct result of Nazi eugenics. It opens this way:

On July 14, 1933, the Nazi government instituted the "Law for the Prevention of Progeny with Hereditary Diseases." This law, one of the first steps taken by the Nazis toward their goal of creating an Aryan "master race," called for the sterilization of all persons who suffered from diseases considered hereditary, such as mental illness, learning disabilities, physical deformity, epilepsy, blindness, deafness, and severe alcoholism. With the law's passage the Third Reich also stepped up its propaganda against the disabled, regularly labeling them "life unworthy of life" or "useless eaters" and highlighting their burden upon society.2

In another portion of the USHMM website we read:

Strategies (to eliminate "unfit" Germans) began with forced sterilization and escalated toward mass murder. The most extreme measure, the Euthanasia Program, was in itself a rehearsal for Nazi Germany's broader genocidal policies. It is estimated that 275,000 adults and children were murdered because of their disabilities.3

The man most responsible for generating the practical framework that became the Nazi's compulsory sterilization policy was Harry Laughlin, an American. Laughlin "received an honorary degree from the Nazi-controlled University of Heidelberg" as "a pioneer in the science of race cleansing," and was devoted in the U.S. to "[developing] a 'white's only' legal definition of 'the American Race.'"4 He was cited in 1926 during a congressional immigration hearing as saying, "in regard to all forms of social inadequacy, the foreign born and their children, who make up about 34 percent of our population, are even inferior to our own native Negro population not long ago released from slavery."5 Twelve years earlier Laughlin wrote candidly of eugenics in "Calculations on the Working out of a Proposed Program of Sterilization:"

To purify the breeding stock of the race at all costs is the slogan of eugenics. The compulsory sterilization of certain degenerates is therefore designed as a eugenical agency complementary to the segregation of the socially unfit classes and to the control of the immigration of those who carry defective germ plasm. . .   At first only the very lowest would be selected for sterilization. . .  As time passes, and the science of eugenics becomes more exact, and a corps of experts, competent to judge hereditary qualities, are developed, and public opinion rallies to the support of the measures, a large percentage could, with equal safety, be cut off each year.6

The Eugenics Archive tells us that "the vast majority of eugenics work has been completely discredited" for being mere "political and social [prejudice], rather than scientific [fact]."7 Nevertheless, despite massive public condemnation of this fraudulent "science," one of the chief organizations to emerge from the American eugenics movement continues to thrive today. It is an organization that began its existence by sharing a combined office with the American Eugenics Society. It is an organization that published prolifically in support of eugenics and proudly displayed on its masthead the slogan, "Fewer But Fitter Children." It is an organization that shared 11 board members in common with the American Eugenics Society (AES) and placed six AES council members on its Citizen's Advisory Committee, including the afore-mentioned Harry Laughlin. What is the name of the organization? Back then it was called the American Birth Control League. Today it is called Planned Parenthood.

Planned Parenthood's founder, Margaret Sanger, was an outspoken eugenicist, as was nearly everyone else in association with her birth control league. "The campaign for Birth Control,” she wrote in 1921, “is practically identical in ideal with the final aims of Eugenics."8 According to Sanger, “the most clear thinking and far seeing of the Eugenists” accepted birth control as “the most constructive and necessary of the means to racial health.”9 The achievement of racial health, Sanger believed, was contingent upon eliminating the unfit:

Before eugenists and others who are laboring for racial betterment can succeed, they must first clear the way for Birth Control. Like the advocates of Birth Control, the eugenists, for instance, are seeking to assist the race toward the elimination of the unfit. Both are seeking a single end.10

Though Margaret Sanger was not as overtly racist as many abortion opponents make her out to be, she was brutally intolerant of the “unfit”—a vague categorization which transcended ethnic lines. Sanger’s bigotry had far less to do with the color of someone’s skin than it did with their health and intelligence. She wrote the following in her 1912 book, The Pivot of Civilization:

There is every indication that feeble-mindedness in its protean forms is on the increase, that it has leaped the barriers, and that there is truly, as some of the scientific eugenists have pointed out, a feeble-minded peril to future generations—unless the feeble-minded are prevented from reproducing their kind. . . . Every feeble-minded girl or woman of the hereditary type, especially of the moron class, should be segregated during the reproductive period. Otherwise, she is almost certain to bear imbecile children, who in turn are just as certain to breed other defectives."11

When Margaret Sanger described people as unfit, feeble-minded, morons, imbeciles, or defective, she wasn’t speaking in a clinical sense. She was leaning upon her own subjective judgment, as evidenced by an assertion she made in The Pivot of Civilization. The “feeble-minded” and their offspring, she warned, are “a menace to the civilized community even when not actually certifiable as mentally defective or not obviously imbecile.”12

For Margaret Sanger, the designation “feeble-minded” had little to do with anything measurable or objective. In fact, we might go so far as to say that in Sanger’s economy, “feeble-minded” was the classification given to anyone who didn’t think or act as she did—especially if they had religious leanings or came from a large family. And because Sanger held so staunchly to hereditary determinism, she believed education was a waste of time.  In her own words:

In the case of children with a low intellectual capacity, much of the education at present provided is for all practical purposes a complete waste of time. . . If the time and money now spent in the fruitless attempt to make silk-purses out of sows' ears, were devoted to the higher education of children of good natural capacity, it would contribute enormously to national efficiency."13

The solution to genetic inferiority, according to Margaret Sanger, was a “policy of immediate sterilization [so that] parenthood is absolutely prohibited to the feeble-minded.”14 In 1943, Planned Parenthood’s statement of goals included, a desire to "foster selective pregnancy" so as to "offer the eugenically unsound means to avoid bringing offspring into the world who would become social liabilities."15 Nine years earlier, they had suggested mandating government-issued "birth permits" before anyone was given "permission" to reproduce. When Margaret Sanger's direct organizational control came to an end, she was succeeded by Dr. Alan Guttmacher, former vice-president of the American Eugenics Society.

Today, Planned Parenthood runs the largest abortion business in the United States, killing hundreds of thousands of unborn children each year, and the eugenic principles of their infancy show themselves in two significant ways. First, abortion destroys minority children at a rate that far exceeds that of white children. Even in the absence of a patently racist agenda, the practical results are extremely disturbing. Second, abortion systematically targets unborn children with disabilities. The widespread use of amniocentesis, beginning in the 1960's, has been fatal to "birth-defective" children. In 1977 Planned Parenthood hailed genetic testing as a way to effectively control fetal abnormality. They suggested putting, "primary emphasis upon pregnancy testing and preventive services, prenatal diagnosis of fetal defects, [and] genetic counseling."16 Planned Parenthood's means for preventing birth-defects, of course, is to kill birth-defective children before they can be born. This is not medicine; this is eugenics.

Columnist George Will points out that the abortion industry’s “final solution” for those with Down syndrome is to kill them in the womb. By definition, Will argues, this is genocide—the "deliberate, systematic attempt to erase a category of people."17 In Iceland, 98% of babies diagnosed with Down syndrome in utero are aborted. In Great Britain, the number is around 90%, and “falls” to 77% and 67% in France and America respectively. In the United States, whenever state legislation is enacted to prevent abortion on the basis of race, sex, or disability, Planned Parenthood files a federal lawsuit to block it. They have no qualms performing eugenically-motivated abortions, which is perfectly understandable.

Foundationally, abortion is eugenics. Both are rooted in bigotry and intolerance; both are mechanisms for eliminating the weak and marginalized. Though Planned Parenthood no longer sings the praises of eugenics in public, neither have they denounced anything that Margaret Sanger ever said or did. Instead, they praise their founder for establishing "the revolutionary idea that women should control their own bodies,"18 conveniently overlooking the fact that Margaret Sanger publicly condemned abortion. Whereas Planned Parenthood once restrained itself to preventive measures—contraception and sterilization, they would eventually leap the moral divide. Margaret Sanger died in 1966 and four years later, Planned Parenthood would kill its first "unwanted" unborn child. The language of eugenics may have been purged from their operations, but the practice remains as thoroughly entrenched as its ever been.

Continue to the next page: A Future Lost