Abortion and slavery both turn human beings into mere pieces of property. 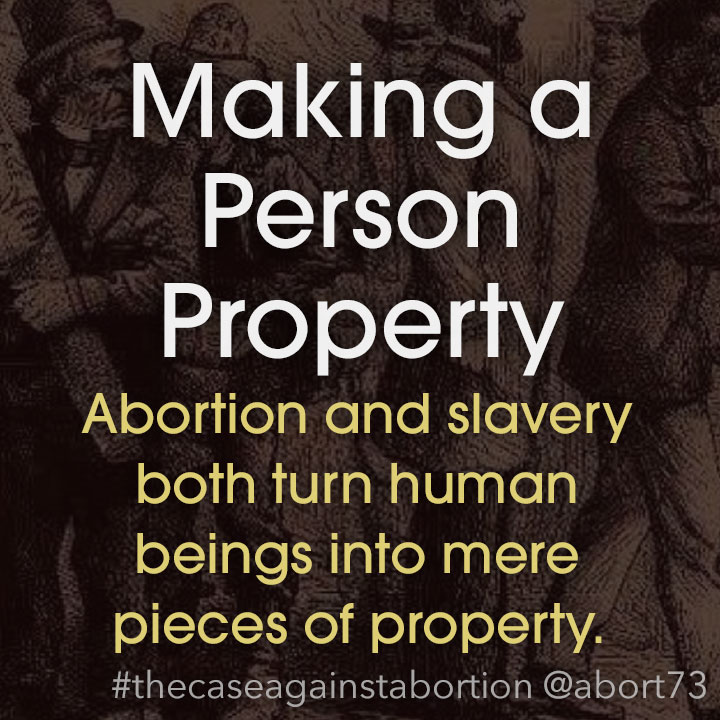 From an ideological perspective, there are many connections between abortion and slavery. Both fit the classic "pro-choice" model. Both are built on legal decisions which classified specific human beings as property–property that could be legally abused or destroyed.

In 1857, the United States Supreme Court—through the majority opinion of Roger B. Taney in Dred Scott v. Sanford—ruled that blacks, "had no rights which the white man was bound to respect; and that the negro might justly and lawfully be reduced to slavery for his benefit. He was bought and sold and treated as an ordinary article of merchandise and traffic, whenever profit could be made by it."1 According to the Supreme Court, Dred Scott and the rest of the African-American population were not persons; they were property. It would be eight years before their ruling would be reversed—first through the 13th Amendment that outlawed slavery, and then expanded through the 14th Amendment which gave broad rights of citizenship to all persons born or naturalized in the U.S.

One hundred and sixteen years after Dred Scott, the Supreme Court once again ruled that certain members of the human race should be regarded as property under the law. Roe v. Wade—argued on much the same lines as Dred Scott—federally legalized abortion and remains with us to this day. From an ideological perspective, there are many connections between abortion and slavery. Both fit the classic "pro-choice" model—as evidenced by the prevailing rhetoric. Against Slavery? Don't Own a Slave! Against Abortion? Don't Have One! Lost in both equations is the victim—the human being who is made the property of another human being and thereby stripped of all rights of personhood.

The mistreatment leveled at both victims is justified on the premise that they're not really people. They're sub-human. Justice Taney in the Dred Scott decision argued that, "it is too clear for dispute, that the enslaved African race were not intended to be included, and formed no part of the people who framed and adopted [the Declaration of Independence]." Justice Blackmun, in the Roe decision, likewise concluded that the protections guaranteed in the 14th Amendment were certainly not to be extended to unborn children.

Thomas Jefferson believed that, "in reason, [blacks are] much inferior [to whites]... and that in imagination they are dull, tasteless and anomalous."2 The late Carl Sagan, was fond of comparing unborn children to segmented worms, fish, tadpoles, reptiles and pigs,3 but he was not alone in using language to dehumanize the victims of abortion. The same sentiment is seen by abortion advocates who balk at the terms “baby” and “child”—insisting instead that it’s only a fetus! In the modern vernacular, “fetus” (which is Latin for “offspring”) has largely become a term of derision, strategically wielded by those seeking to marginalize babies in the womb.

John Wyatt, the Professor of Ethics and Perinatology at University College London, commented on this development as follows:

The world of the modern, perinatal unit is a strangely schizophrenic kind of place because in many cases the fetus, the baby, is uniquely precious. The first ultrasound scans are a time of wonder and excitement. And so the professional language we use is the language of parenthood. It's the language of a baby, but if it becomes apparent that the fetus is not wanted, then the professional language changes. Now we use language like, "you are making decisions about your pregnancy. If this is what you wish, the pregnancy will be terminated." The language is vague, deliberately technical, (and) euphemistic. And what this tells us is that the value of the unborn has become a personal construct. Value is bestowed by the other. I decide whether this other being is uniquely valuable or in some way disposable.4

Professor Wyatt supports the right to legal abortion, but he recognizes the disingenuous way language is used to communicate or withhold value—just as it was with regard to enslaved African-Americans. In reality, “fetus” is just a marker of development—like “infant” or “toddler.” Imagine the absurdity of hearing a new parent indignantly yell, “It’s not a baby, it’s an infant!” Contrary to the tired claim that “fetus” is the more objective designation, the term “unborn child” has become an internationally recognized descriptor. To wit, the United Nation's Globally Harmonized System of Classification and Labelling of Chemicals (GHS)—which provides a set of standardized phrases for global chemical safety—includes the term “unborn child” in three of its GHS hazard codes.5

Just as language has been used to dehumanize the victims of both slavery and abortion, language is also used to "spin" vice into virtue. Thomas Jefferson argued that the most loving thing he could do for his slaves was to keep them enslaved. In the book, The Constitutional Principles of Thomas Jefferson, Caleb Patterson writes that "it was Jefferson's humane feeling for his slaves that kept him from freeing them. To free the ordinary slave was not very different from starting him on the road to starvation. Or as Jefferson put it... like abandoning children."6 Today, people argue that the most loving thing an impoverished mother can do for her children is to abort them.

Today, many of the people who defend abortion in principle, still try to distance themselves from it in practice. I'm personally opposed to abortion, but people should be free to make their own choices. If this is your attitude about abortion, if you think you've carved out some morally-neutral middle ground, ask yourself that same question in regard to slavery or lynching. Would you ever dare make the statement that, while you're personally opposed to lynching, you still support the rights of other men to lynch? If there was no middle ground in regard to slavery, there is no middle ground in regard to abortion. The reasons that the Supreme Court reversed itself about Dred Scott are the same reasons it should reverse itself about Roe v. Wade. Until they do, we continue to live in a society in which certain living persons are considered property.

Continue to the next page: A Future Lost