Abort73.com > Abort73 Blog > Behind the Scenes of a Medical Abortion

Behind the Scenes of a Medical Abortion 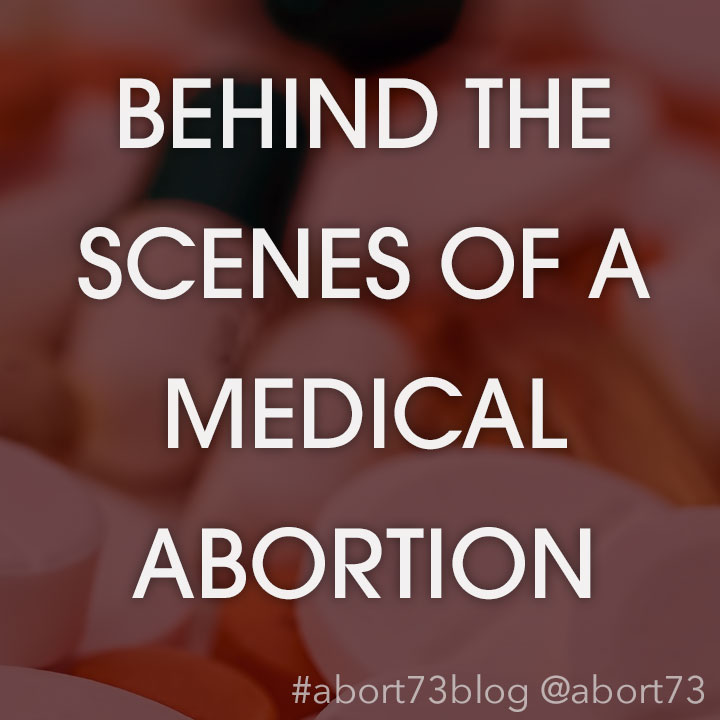 Last week I published excerpts from many of the “positive” abortion stories that Abort73 has received over the last two years. Today, I’m going to give you one in its entirety. It comes from a 19-year-old woman in South Australia. I do this for two reasons. First because it provides behind-the-scenes access to an event that is rarely spoken of with such candor. Second, because it demonstrates that medical abortion, which is often regarded as a more natural or holistic alternative to its surgical counterpart, is nothing of the sort. No matter how it’s performed, abortion is a violent and unnatural act. It fatally injures a tiny human child and runs roughshod over the natural proclivities of the female body—which is designed to do everything in its power to protect the life of the child that is growing within. In the words of Frederica Mathewes-Green, abortion is “as obscene as pouring dirty motor oil into a pristine mountain lake.” It brings “grisly death into the very house of life.” Keep that in mind as you read this story:

I threw up within an hour of taking the first dose and had to return for a second pill. Forty-two hours after taking two doses of mifepristone, I began the serious phase of my medical abortion. At this stage, I was around 7-8 weeks pregnant and it was April 20th, a holiday I love to celebrate, and so after a healthy wake and bake, a large fruit salad with yogurt, one Ondansetron for my heinous nausea, one Panadeine Forte with codeine, and one Voltaren, I gave my body an hour to rest. My boyfriend arrived at my house and we cuddled up in my bed as I inserted two Misoprostol tablets in each side of my mouth, four in total—pressing up against my gums and cheeks.

About twenty minutes in I noticed light cramps and knew I was in for some hard pain. I took another Panadeine Forte, even though I hadn't completely dissolved the chalky abortion pills sitting in my mouth yet. From here, the pain intensified a thousand fold. I would feel waves of it rushing through my belly, tightening and throbbing similar to period pain, but with an added dose of raw relentless PAIN. It came in waves which was the only positive thing. I would go from writhing and groaning in pain, with a peak that lasted about three minutes, followed by a steady decrease in pain for one minute. One minute of feeling totally fine and pain-free, only to be immediately followed by another minute of pain intensifying, leading into horrific, debilitating pain.

It all happened so quickly, I was not even an hour in. I had terrible nausea, began throwing up the entire contents of my stomach about once every hour. After expelling my deluxe fruit salad, I had nothing left in my stomach but water, bile, and the pain killers. I thought it was the Voltaren making me sick as I read a whole bunch of nasty sounding side effects, but I think it was my extremely-low tolerance to codeine. The anti-nausea meds did nothing. Taking two, plus codeine, on an empty stomach is death. My boyfriend made me choke down an orange which helped a bit, even though I still spent a long time expelling anything and everything from my stomach afterwards. So I wasted eight Panadeine Forte pills and was too scared to take more Voltaren as I thought it was the drug making me sick. It actually was the best; the anti-inflammatory agent helped so much. I definitely recommend asking about an anti-inflammatory. This initial time included a call to the PAC in South Australia, who enabled this abortion, about my horrendous pain and nausea. They told me to just bear through as best I could. I managed to keep about four of the painkillers down, but the pain was so severe for the first three hours that I felt no relief from them at all.

When I was in minimal pain and could actually speak, I would ask my boyfriend, “How long has it been now?!?!?" Usually only an hour had passed. It felt like ages. I asked him to fill up my hot water bottle, to find me some heroin for the pain—jokingly, but also kinda seriously, or to pack me a cone. They really helped me deal with the whole situation. When I could stand, I rushed to the bathroom. The only side affect I didn't have was diarrhoea, even though I constantly felt like I needed to go to the toilet. I did go once and during that time my hot water bottle burst in my lap. I knew there were more in the house and I knew how much they would help me, but the pain was so severe it made it impossible for me to locate one until a few more hours passed. I stayed in bed, screaming into my pillow and changing positions regularly, none of which were comfy for very long. I found random things that helped: a towel soaked in hot water laid across my back or belly, deep breathing where it was possible, sitting down in a super hot shower, grabbing or hugging a pillow next to me while having many more on hand as well as my quilt, and strangely, moving my legs about. I would grind my hips around and spread my legs, rubbing them across my bed while stretching out my toes. I have no idea why or how it helped the pain but it did.

After five hours of the worst pain imaginable, probably similar to being in labour but with less pay off, we decided to relocate to my boyfriend’s house as he was starving. Sitting in the car was a comfortable position, and after two minutes of driving I felt the last painful twang of the night.

Then came the blood. I was concerned I hadn't bled enough through the day; I hadn't even had to change my pad. But while walking about the shops buying snacks, I felt a gushing waterfall happen inside of me. I felt chunks coming out too, and told my boyfriend I had to go to a toilet before sitting back down in his car. So we went to the servo across the road and I changed myself. OMFG, so much blood. My underwear were nearly soaked and the maxi pad completely red. I replaced it, after washing my thighs, the underwear, and the toilet seat with soap, and then wrapped more toilet paper around the pad. We then picked up a pizza and went home. It took less than 20 minutes, and at home I had to change myself again and have a shower. I passed a huge clot in the shower and had to grossly smush it down the plug hole. I am unsure if that was the embryo as I had lost a few other huge clots too. Getting out of the shower was a struggle. I had to keep toilet paper over my vagina while drying my legs briefly and quickly, and put on my fresh underwear while still being very wet with water. I went through four pairs of underpants and had to throw two of them away. Adult diapers probably would have been more suitable than maxi pads. It was A LOT of blood. The only trade-off was that I felt no pain at all whilst bleeding or for the rest of the night.

Today I woke up after a great sleep, ate an orange and took one Voltaren in preparation for my final course of Misoprostol to expel any more uterine pregnancy tissue. I am in no pain, feel greatly relieved, and am not bleeding heavily at all. It would have been a great success in my opinion, if it weren't for the pain. I felt the medical abortion was a good option for me, as I would be terrified and have a panic attack in an actual operation setting, and figured I could deal with the pain. I was wrong, even when the painkillers did work, I still felt like I was going to die. Because of this, I will never go through this experience again, and hopefully never have to have any type of abortion, but absolutely not a medical abortion.

The fact that a young woman could go through such a harrowing ordeal, and still consider abortion to be worth the pain, is evidence of both her desperation and her tunnel-vision. By compartmentalizing her experience to be about the removal of “uterine pregnancy tissue,” she managed to avoid the ethical implications of intentionally killing a tiny and helpless human being—her own child, in fact. Whether she’ll be able to maintain this compartmentalization over time is less certain. There’s no doubt that abortion provides an immediate pragmatic benefit to millions of women each year. They go from being pregnant to not being pregnant, but this is not an ethical argument. It gives no consideration to the fact that an innocent human being has lost his or her life, without their consent, and makes it very hard for those who benefit from abortion to think about it objectively. For abortion to be morally justified, it must be justified on principle, not because of the convenience it offers to those who want to get rid of their baby.