Abortion on the Rise for the First Time since 2006 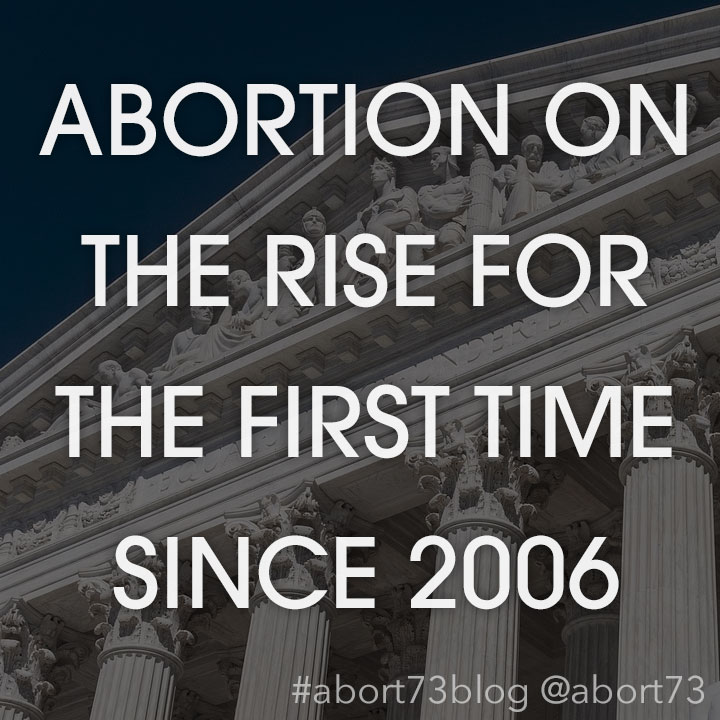 Forty-seven years ago, today, the U.S. Supreme Court declared that all state prohibitions against abortion were unconstitutional—on the dubious assertions that (1) nobody knows when life begins and (2) the right to privacy includes the right to hire someone to “privately” execute your unborn child. Five decades later, the decision rendered by those seven men—which was supposed to put the abortion issue to rest once and for all—remains the most contentious verdict in American history. In fact, America is even more divided over abortion now than it was in 1973, when abortion managed to slip in through the back door. I suspect there will still be years of struggle ahead, but enough people are now awake to this injustice to ensure that abortion will never win the day. No lie can live forever.

That being said, it looks as if the United States' 12 straight years of declining abortion numbers have come to an end. For the last nine years I have used state-level abortion data to estimate annual abortion totals for the entire country—well in advance of the numbers released by Guttmacher and the Centers for Disease Control. By adding up all the abortions that have been publicly reported by state health departments, I can use that number to extrapolate a total for the entire country. Abortion totals in the U.S. can be maddeningly imprecise, but my estimates have held up well over time and have generally anticipated the trends that would eventually be noted by Guttmacher and the CDC.

To date, 29 states have reported abortion totals for 2018. In 2017, those same 29 states accounted for 40% of all abortions in America. Assuming they accounted for roughly the same percentage of abortions in 2018, we can conclude that approximately 876,000 U.S. abortions took place in 2018. The year-over-year abortion total increased by 1.6% while the abortion percentage—which is the percentage of pregnancies aborted (excluding spontaneous miscarriage)–rose by 2.6%. In 2018, just over 16% of all pregnancies in reporting states ended in abortion. The abortion total went up in 13 states, and the abortion percentage—which is the more telling metric—went up in 16 states. Total births decreased in every state except two: Maine and Missouri. It was the fourth year in a row that total U.S. births declined, and the tenth year in the last eleven. According to CNN, total U.S. births in 2018 dropped to a 32-year low.

Returning to the topic of abortion, these are the 10 reporting states with the highest increase in abortion percentage:

And these 10 states saw the biggest decrease in abortion percentage:

Here’s another interesting reality to consider. According to Gallup’s 2019 abortion poll, women are more likely to identify as “pro-life,” and men are more likely to identify as “pro-choice.” Cultural narratives be damned! Among all U.S. adults, 48% identify as “pro-life” and 48% identify as “pro-choice.” The rest have “no opinion.” So there you have it. We are a nation divided, and Planned Parenthood believes “access to abortion is hanging by a thread.” They’re using it as warning call to rally their base. Now the question is, are we who oppose abortion as radically committed to the defense of unborn children as our opponents are to their destruction? The Supreme Court has already agreed to hear a challenge to Louisiana's abortion law this summer, but what they will ultimately decide is anyone’s guess. Hope for the best, but prepare for the worst. After two decades of steady abortion declines, we are at a crossroads. Will we redouble our efforts in defense of the least these—our unborn neighbors—or will we grow weary of doing good and succumb to apathy? Time will tell, and one day each of us will stand before our maker to give an account for the time we’ve been given. If that isn’t a warning call, I don’t know what is.