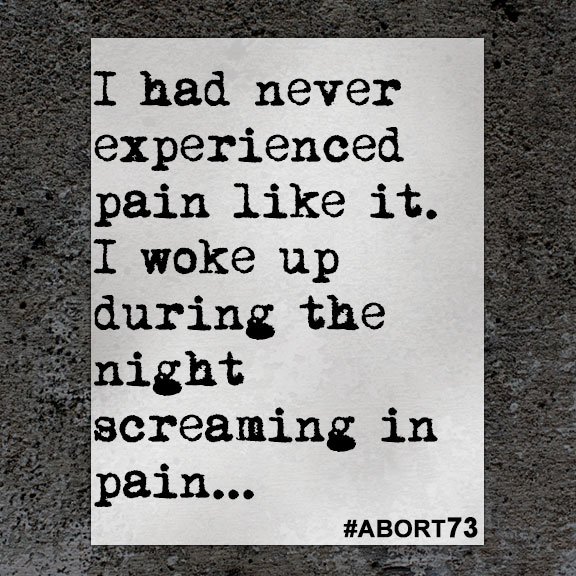 I had never experienced pain like it. I woke up during the night screaming in pain...

I found out I was pregnant at 19. I had just formed a relationship with my childhood sweetheart when we found out I was pregnant. We had been officially in a relationship for 12 days. I had felt tired, hungry and bloated for a few weeks, but I was on contraception so thought nothing of it. I missed my period and waited a few days to take a test. Positive. It couldn’t have looked more clear—straight away, the blue cross appeared. I was shocked and could not believe my eyes. My partner was away with work in Holland at the time. I decided to tell him whilst he was away because I couldn’t bear to live with it alone until he came back. I told him over text. He was scared and reacted sharply. I sent him a picture of the test. I told him not to worry and that I would do another, so I drove to the shop and brought two more. Once and twice again, it read positive.

I actually began to laugh at myself because I was so nervous. I had just got my dream job, my dream partner, and the rest of my life ahead of me. My first thought was finding out how far gone I was as I didn’t want to have the surgical abortion—because the whole idea petrified me. The medication did too, but it seemed less daunting. We went for a private scan to find out, to put my mind at rest. I lay there in an ultrasound, my partner held my hand, and we anxiously waited to see it. It was very small, but there was a heartbeat. He played us our baby’s heartbeat, and my partner and I looked at each other. He cried out loud.

We found out the due date and were given a purple folder containing pictures and a memory stick with the heartbeat and ultrasound images on. We sat and cried in the car park for 15 minutes. By then we had already decided we wanted to have an abortion because we want to get married and have a home when we bring our family into the world and didn’t want to provide anything less than that. I called Marie Stopes to make them aware of the age of my pregnancy, and it was confirmed that I would have the medical abortion. I felt more comfortable knowing that, as I thought it would have been an easy process.

After my abortion, I didn’t experience pain—nor during the night after, even though I woke up several times in the night and passed large clumps of tissue, clots and blood. The next few days were grey. I don’t remember much, but I went back to work two days after. It wasn’t until the weekend that I knew something was not right. I began bleeding heavily. I could not move from the toilet; I began experiencing cramps and passing large clots of tissue, bigger than my hand. I was advised to call 999 by Marie Stopes.

Once the ambulance arrived, I could not walk. In the ambulance, my blood pressure dropped to 78, and I was rushed into hospital as quickly as they could take me. We were sent straight in as the amount of blood I was losing had become critical. I was given iv fluids whilst trying to go to the toilet on a commode and was rushed to Resus because my blood pressure had dropped so much. Over the next three days I was subject to three procedures where doctors and gynecologists tried to remove my incomplete abortion from my vagina using metal clamps. I had never experienced pain like it. I woke up during the night screaming in pain. I was experiencing contractions as my body was trying to push the tissue that was stuck in my cervix out. After they realised they could not remove it, I was taken for a scan. The nurse told me it was still there, but there was no blood flow. By now I had lost so much blood I was informed I would need two blood transfusions given over a one-hour period to keep me alive. The following day I was taken into surgery for the surgical abortion I had always feared, and here I was having it anyway. I felt like I was being punished for making my decision to save my childhood. I felt like I had granted death twice and felt like I was supposed to die because I had taken a life.