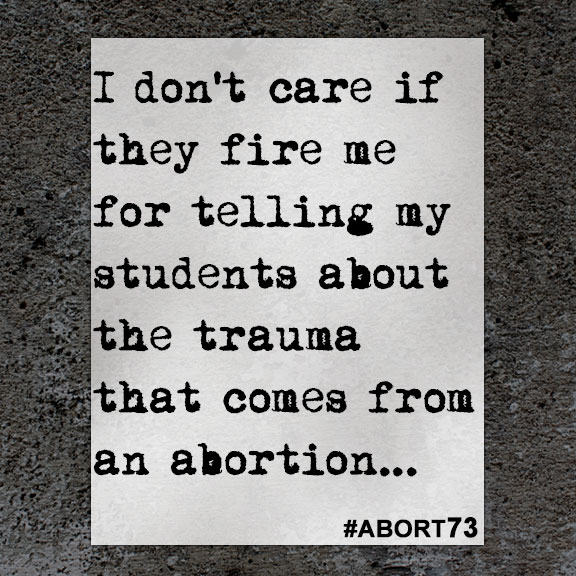 I don't care if they fire me for telling my students about the trauma that comes from an abortion...

I had an abortion when I was 19, and I have regretted it almost every day since then. My daughter would have been 14 today. The emotional devastation is unbearable and has wracked with me depression for years—and ruined many relationships, leaving me constantly alone and unable to be at peace. I want to be a mother so badly now. I want a child of my own so badly, but I am alone, and no good man will take me the way that I am. Im an alcoholic and an emotional mess who breaks down into tears several times a day. No man wants that.

This morning, knowing my daughter would have been 14 today, I couldn't stop crying this morning before my homeroom class arrived at the charter school campus where I teach 8th graders social studies. The first student to arrive came in and saw me crying and told me not to cry because it was her birthday. It sent me over the edge, and I couldn't stop crying, because this student was the same age my daughter would have been.

As my other students arrived today, they too saw I had been crying, and so we talked about why I was crying. I told them about abortion and how much they never tell you—how much you will regret it. They make you think its your choice, but even if it’s allowed by the law, that doesn’t mean it’s right. Most of the girls in the class understood. Some of the boys did; some did not.

One boy spoke up and said that his older sister got an abortion this past summer when she was just 15 and that she has been having a terrible time struggling with depression, and that he was worried she might be suicidal. He said his father has been very harsh to her about the abortion and wants to send her off to some special school somewhere. I told the rest of the class to not make any gossip about it and to just be kind to her because the girl was in enough pain now. She didn’t need more suffering.

During my planning period I went to the counselors office and told them what I had heard. They said they figured something like that might have happened and they appreciated the heads up. I told the counselor I wanted to speak with the young woman, perhaps after school. I could barely hold back the tears when I told the counselor that I had a student who turned 14 today, and that was the same age my daughter would have been today if I hadn’t had an abortion in college.

She was shocked and very sympathetic.

During my lunch hour I was eating alone in my classroom, because I could not take being with others in my emotional state. There was a knock at the door. It was the 15-year-old sophomore girl who had an abortion over the summer, tears streaming down her face. I burst into a sob as soon as I saw her crying, and I hugged her. We stood there crying and holding each other for minutes that felt like hours. She told me she cannot bear the secret of knowing she would have a baby inside her right now and that she would be a mother soon if she had not done what she did. I told her I understood, and that it would be ok, and that she would have the chance to become the mother she was meant to be soon enough. She said she wants to do anything to have a baby now and to make it right, because she wakes up at night dreaming about babies and she cannot take it anymore. I told her that her time will come, and not to rush the healing, and that she is loved, and that she must pray for peace.

I told her she was only a year older than my daughter would have been if I had not had an abortion when I was a teenager, and that I know the pain she feels. She says she hates that she feels like she has to hide her abortion, and hates the shame and guilt. She knows what she did was wrong and she doesn't want to the world to hate her more than she hates herself. I told her the world does not hate her, and that if she felt she wanted to talk about it that I was always here to talk to her. If she needed to take her time, that was ok to, but that my door was always open to her.

She said talking to me makes her think she wants to make a statement to the entire school about it at our next assembly, maybe before the pep rally this Friday. I told her I didn’t know if the school would agree, but that I would do anything to help her. She asked if I would stand with her when she tells her story because she doesn’t want other teenage girls at the school to get pressured or bullied into an abortion the way she was.

I told her I supported that and that of course I would stand with her. I sent the email to the principal, counselors, and copied her at her school email address, relaying her request to speak to the school about the issue of teen abortion. I have not heard back yet. But I plan to talk to my classes after lunch about abortion today. This 15-year-old girl’s courage has inspired me to share my trauma to hopefully save lives.

I don't care if they fire me for telling my students about the trauma that comes from an abortion. They need to know. I teach social studies, and this is a social issue that doesn’t get taught the right way in schools. I have always avoided the subject in the past as a teacher for fear of what might happen. But I cannot maintain the lie any longer.

The children need to know how devastating abortions are. Today is the day I will honor my daughter I never met by telling her story. I must speak for the dead today.

No matter what it costs me, I feel I must do this in her honor.