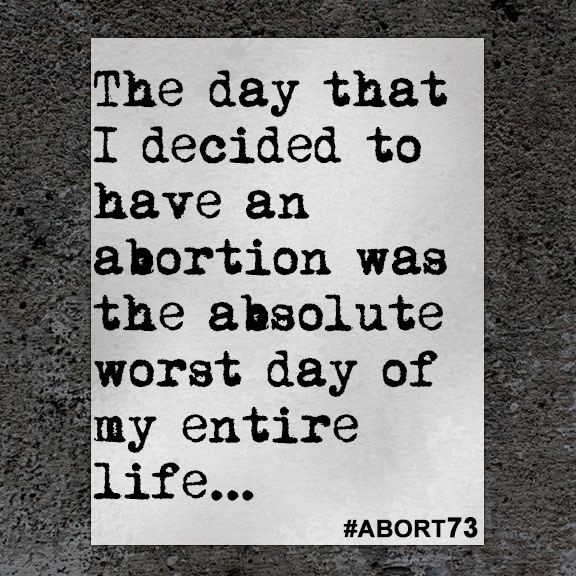 The day that I decided to have an abortion was the absolute worst day of my entire life...

I found out I was pregnant on Valentine's Day of this year. It was two weeks before my 25th birthday, which I planned on celebrating in Miami. When I found out, I ran to my husband and cried. This would have been our fourth child together. We already have a four-year-old daughter, two-year-old daughter, and one-year-old son. The thought of bringing a fourth child into our already stressed-out, debt-filled, sleep-deprived life sounded like a complete nightmare.

I was not thrilled at all about this pregnancy, but I knew I could never abort one of my children. It's something I have always felt so strongly about. My husband, on the other hand, told me that there was absolutely no way we could afford to bring another life into this world and our only option was to abort. It didn't matter what he said at the time because, despite the unfortunate circumstances, this baby was already a part of me and I had already loved it.

The next day our engine blew on our car, and we were forced to by another one. That was the moment that I finally realized how bad things were financially. I went back and forth with the idea of having an abortion, but my heart couldn't let go of the fact that God gave me this child for a reason and there was nothing I could do but trust him. I tried to explain my views on abortion, but my husband wouldn't hear it. I tried keep a positive attitude towards the situation, telling him how we have survived way worse things then having a child. I told him that it was our mistake for not using protection during sex and that we had to grow up and deal with the consequences of our actions. I promised to get my tubes tied so we wouldn't have to go through having another child ever again. I tried to convince him that it might be another son and then we would have two boys and two girls to play with each other.

None of my efforts worked. I prayed to god that he would give some understanding to my stupid, selfish husband, but it didn't work. Ten days later, after being verbally abused, ignored, and basically treated like the scum of the earth, I made my appointment to have an abortion. Part of me didn't want my child to be born with a dad so hateful. I figured my baby would be better off in heaven then in my own home.

The day that I decided to have an abortion was the absolute worst day of my entire life. I am way too sensitive of a person to have gone through the emotional damage that having an abortion has caused me. It's been three days and I have not stopped crying. I have nightmares about my baby every night. Whenever I get a moment to myself, I break down and cry. It's the type of pain you can feel in your bones, the type of regret that never goes away. I have dropped out of the online class I was taking because I can't seem to focus on anything but the child I killed. I am divorcing my husband and quitting my job to move down south with a family member. I sleep with a teddy bear at night now because of the emptiness I feel inside. I had my abortion three days ago, and I regret that day. I am a young mother of three, and I am here to tell anybody who thinks that having another child is hard that nothing is as hard as reliving the image of a complete stranger taking that child from you. It's disgusting and I hate myself every second of the day.

I would have loved that baby no matter how hard life would have been. But instead I made a selfish choice to sacrifice my own child so that my family would have a better quality of life. Seeing me go into a complete downward spiral has made my husband regret his own decisions. He told me if he had it to do it over, he would have never made me go through that, but it's too late now. A procedure that only took five minutes will now take a lifetime to heal from. My abortion was recent, so my feelings are fresh. This is the raw uncut truth. You will hate yourself afterwards. Having a child is hard, but I have never regretted or hated one of my kids. A baby is a blessing, no matter what. God gives life and only God should be able to take it away. I will forever live with this anger and hurt inside of me. I can only hope that one day I am going to be able to come to peace with my past, but I don't see that happening anytime soon.