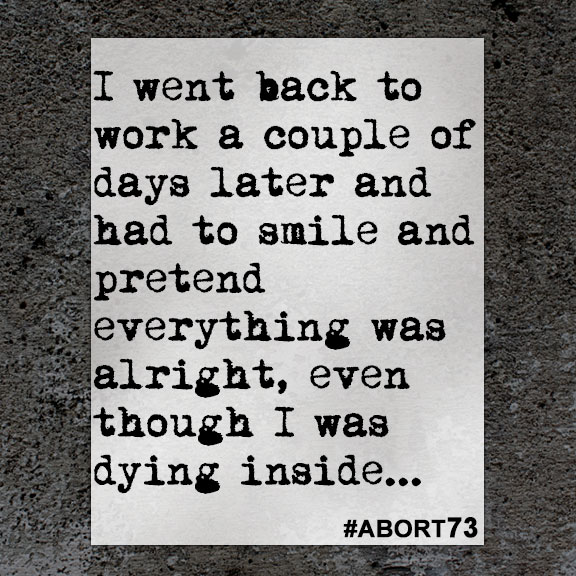 I went back to work a couple of days later and had to smile and pretend everything was alright, even though I was dying inside...

My boyfriend and I had recently spilt up. He was away when I realised I was pregnant so I rang him in a state and told him. I waited until I'd missed my period to take a test, but it was negative. So I went to the doctor to find out why I'd missed a period. They did a test and that was negative as well. The doctor sent me to hospital with a suspected appendicitis. Another test, this time positive. Blood test after blood test, scan after scan. To cut a long story short, it was finally confirmed I was pregnant but it was too early to see anything on the scan. My ex and I decided the only option was to get an abortion. It was the 12th of October, and I was about 6-weeks pregnant. The experience at the clinic wasn't anything like I expected. No one questioned why, discussed any options, or asked me anything. Deep down, I wish they'd tried to convince me to not go through with it. The nurse handed the huge pill to me while I sat crying, gripping my ex's hand. She didn't say a thing. As soon as we left, I broke down in tears. I was so lucky to have someone with me to comfort me. The pain came on an hour or two afterwards, and I've never felt anything like it. I went back to work a couple of days later and had to smile and pretend everything was alright, even though I was dying inside. A short time later, our relationship turned negative again and he left me to deal with this all on my own. I don't sleep, even with the pills, or I sleep too much; I'm constantly exhausted. I'm now having counseling for my depression and anxiety, but all I want is my baby back. I wish someone had warned me of the implications. I murdered my baby and myself. If someone asked me if they should get an abortion, I would strongly warn them against it. I wouldn't wish the pain I'm feeling on my worst enemy. The entire time I was taking the contraceptive pill.