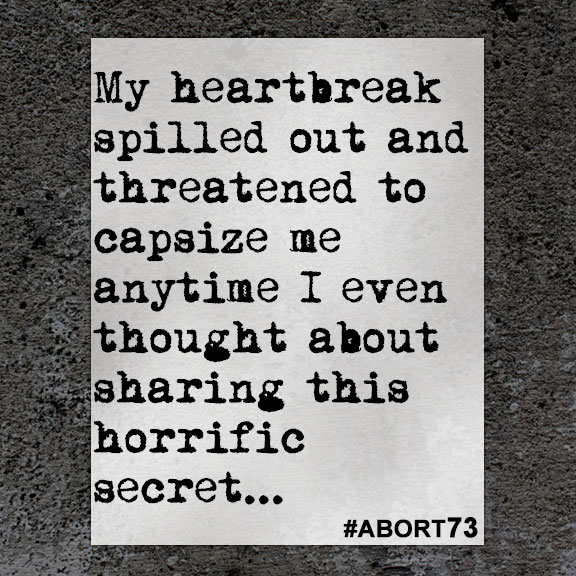 My heartbreak spilled out and threatened to capsize me anytime I even thought about sharing this horrific secret...

Abortion has impacted my life in a very real way. I don’t come at the issue as an outsider. No, I know how evil abortion is in a personal way. It leaves its victims traumatized with PTSD-like symptoms that can remain unexplained and misunderstood for many years, sometimes decades, and sometimes forever.

This is not an easy story to share. I didn’t share it for decades. Part of me believed that it was irrelevant to the person I am now. Yet as I grew older, my sense of shame grew with each year, as my living children matured and some of them left home and I was left wondering what could have been; what I had squandered; what had been taken from me. My shame kept me silent. My heartbreak spilled out and threatened to capsize me anytime I even thought about sharing this horrific secret. And then I encountered God in a new way.

My journey has brought me to a place of profound healing and redemption in Jesus, my savior. I have learned things that bring me so much joy I do not have adequate words to describe it. The grace of God for you and me is beyond what we can imagine. It is a subversive grace, so out of the ordinary that it is offensive to some. It is expressed in uncertain whispers—could He really take this sin and make it into something good and beautiful? Would He, with foreknowledge of what I would do, still choose me to be the mother of a child who is now in heaven fulfilling a purpose? I have learned that He can and He would and He did.

And so, my story will be shared. It has to be, because I know now that God wants all women who have suffered abortion to know their freedom. And because I know the beauty of freedom and grace, I also want to see all post-abortive women come to know the truth of God’s love for them. So I will trust you with my pain. I will always have pain because of what I did and what was done to me. But the shame has been taken from me and replaced with peace. Come and listen to my tale, and begin to make the great exchange that the Lord wants for you too.

If you could see my Facebook page, you would see pictures of five beautiful children; my pride and joy. But the real truth is that I have ten children: five that I can see and touch, and five that are in heaven waiting for me. I have had four abortions (supposedly convenient and easy choices that should have left me happy and carefree according to the pro-abortion camp)—and though I have no proof, I believe one of those aborted pregnancies was twins.

My journey with abortion began in 1979 when I was 16. My parents were finally separated after a marriage of less than 20 years that was filled with turmoil and alcoholism. My father had moved across the state of Florida to be with his new family and my mother couldn’t cope with her new life situation. I was a rebellious and angry teenager who had lost all respect for her parents. I was careening through life with no moral compass, desperately searching for love. I didn’t believe my parents loved me so I ignored their wishes and became very difficult to live with. My mother made me leave, so at 16 I was homeless.

I had a boyfriend who lived about a mile away and that was where my mother dropped me off when she told me that I was no longer welcome at home. The driveway of Michael’s house became my home base. I even put my clothing, which was all I had, in the trunk of his car. If you were to look inside that trunk, you could guess how I felt about myself. Jeans, dresses, skirts, teeshirts, all just thrown there in the back of that old Plymouth Valiant, dirty and crumpled and unorganized.

My life on the streets of Altamonte Springs was as chaotic and crazy as the jumbled pile of clothing in the trunk of Michael’s car and before long, I was pregnant. I don’t remember how I found out. I doubt I was paying much attention and I know I didn’t have access to a pregnancy test. Originally I was to be placed in a home for unwed mothers (that’s what it was called back then), where I would carry the baby and give it up for adoption.

My boyfriend’s parents seemed to be in charge of my fate, but I don’t know if my father or my mother were behind the scenes giving instructions. All I know is that instead of the home for unwed mothers, I ended up at the abortion clinic. I don’t know how far along in the pregnancy I was. I remember being at the clinic, dressed in a hospital gown along with other girls. They gave me a pill in the shape of a triangle. Nothing else is clear.

Within a few weeks of the abortion I was pregnant again. Just as before, I didn’t know how I found out and I didn’t know how far along I was when I was taken to the clinic again. Afterwards, my boyfriend’s father took me to a trashy hotel on Orange Blossom Trail where the hookers stayed, put me in a room along with garbage bags full of my dirty clothes and told me that was where I deserved to be.

This second abortion is the one I believe was twins. There were some complications associated with it. I was at a keg party in the woods one night and I was wearing a white jumpsuit. I felt something hot on my legs, looked down, and saw a scarlet stain spreading. I was hemorrhaging and eventually ended up at the hospital where they were able to stop the bleeding. Then a few weeks later I was in Georgia with my boyfriend and his parents and on the way back home to Florida I began bleeding again in the backseat, creating a huge pool of blood on the leather upholstery. I don’t remember why I was with them again after having been put up in the hooker hotel. Maybe they felt bad about their choice to do that and decided to invite me on their vacation.

My boyfriend’s parents rushed me to a hospital somewhere, wherever we were in Georgia, and there I received a blood transfusion. I had lost so much blood. When I think about it, 1979 was a dangerous year to have a blood transfusion. While I was there at the hospital I remember that the doctor asked me what had happened to me. I told him that I had recently had an abortion and this was my second time of blood loss. It was clear that the abortion had been done improperly, and I had now twice almost bled to death because of it. I don’t know it for sure, but I now believe that I had been pregnant with twins (they run in my family) and the “doctor” who performed the procedure carelessly didn’t remove all the tissue.

Someone had decided for me that I would have these abortions. It was a collaboration between my boyfriend’s parents and perhaps my mother and father. Someone had to give permission at the clinic. Did they forge a signature? How far along was I? Why were the original plans changed? I was going to carry the baby at first but someone decided differently. What would my life be like if I had given birth?

Fast forward eleven years. Such a short period of time but so eventful. I was 27 and I had left my husband of eight years, bringing with me once again just my clothing. But this time, I had two beautiful little girls with me. My daughters were 6 and 8 and I was fiercely protective of them. I’d left the marriage because of abuse. I was ready to change my life. I didn’t know then that soon I would be repeating very regretful circumstances and this time it would be my decision.