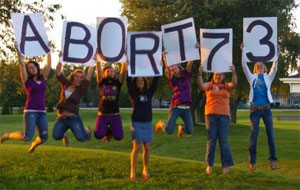 This summer, Abort73 was invited to be a part of the Do Hard Things Tour which challenges teens to rebel against the low expectations society places on them. Both before and after we joined them on the road, Abort73 was the direct beneficiary of such thinking in action. This past Spring, a 15-year-old girl from Ithaca, NY decided to host Abort73's Love the Least in her community, and she wouldn't take no for an answer. By the time she was through, more than $5,000 had been raised for Abort73. More recently, a group of high school girls here in Rockford, IL (photo above) started looking for a way to give to Abort73 that would go well beyond their limited means. The result was a community-wide yard sale that raised close to $1,400.

Below, you'll hear, in their own words, how these events came to be. My hope in sharing these stories is to honor their efforts, encourage those who support our work, and inspire more of you to follow their lead. Youthful zeal and godly conviction are a great combination!

My heart broke when I stumbled upon Abort73.com... Although I always considered myself pro-life, I was shocked at what I saw and could no longer be silent. [I'd just led a study of the book] “Do Hard Things”. The message of the book was difficult for many of the teens to swallow and I knew it would not change anyone’s life if we didn’t put it into action... When I saw the section on Abort73.com about hosting a “Love the Least” event in your area, I knew this was it. I spoke with my family about it, but to be honest we didn’t take the time to think about the implications of such a big hard thing. We just took a plunge in the deep end. I think it was God, because if we had known just how hard it would be, we might have hesitated...

Getting started was a challenge. After many failed attempts to delegate jobs, we ended up with a team of about four people who were ready to tackle this (plus my family)... We also knew from the start that we wanted to raise enough money to bless Abort73 with an offering. [Our fundraising coordinator] “felt really discouraged when [when told that our funding goal] was $4,000”...

Collaboration was probably the biggest challenge of all. My vision of like-minded people working alongside each other in unity never fully materialized. Making “Love the Least–Ithaca” a reality involved a sacrifice of time, energy and resources that not many people were willing to make. When others didn’t do what they volunteered to do, it was very tempting for me to just do it myself. I learned the importance of communicating my expectations clearly and repeatedly. I had to continually encourage others to follow through on their commitments. God was teaching me to rely on Him. I could not make this happen. I could not change people’s hearts. I had to trust that He would pull this together. He probably did it this way on purpose so that I wouldn’t be able to claim any of the glory for myself...

Throughout this whole process, all of us have had to do things that took us outside our comfort zone [like] calling pastors to let them know about “Love the Least” and ask if we could promote the event to their congregations...

We all faced small hard things. For some, it was being faithful in reading God’s word everyday and spending time with Him. For others, it was beating that old habit of procrastination. One major struggle for me was resting. I have an intense personality and it was very hard for me to keep the Sabbath. It’s so easy to come up with excuses to ignore the command to rest, since it’s not as black and white as the other commandments. Coordinating this project has helped me to understand that it needs to be a priority, since I will never get around to resting if I wait until I have nothing to do. God doesn’t give arbitrary commands. Those who obey will be better off in the long run...

Fighting for the unborn definitely goes against the cultural norm, especially in Ithaca. Ithaca is an extremely liberal town open to almost anything except Christianity. In order to publicize the event, I wrote a letter to the editor drawing parallels between the Jewish Holocaust and abortion and included an invitation to “Love the Least” at the end. It got published in the Ithaca Journal and some people left flaming comments on-line calling me all sorts of names and deploring my bigotry. There certainly is a cost to taking a stand on such a controversial issue.

(Despite all the hardships) it’s worth the price. We are asking God to use this event as a catalyst for turning the tide of injustice in our city, nation and the world. We want to see holiness uplifted in our generation. We hope that many babies will be spared and souls saved through “Love the Least”. My desire is that our passions would line up with Christ’s passions. I want to see God’s kingdom come to the earth.

Riley Bushman on the 1st (of many?) Abort73 Community Yard Sale:

I recently returned from a week long summer camp: dirty, sleep-deprived, duffle in tow. What I found to be more repulsive than this, however, was my closet. While it was missing close to two weeks of outfits, it remained full, even close to overflowing. It was a relief knowing I did not need to immediately do laundry, but more so it was a realization of my excess.

Abort73's financial distress also recently captured my attention. I want to regularly donate but as an unemployed high school student I find my means of giving seriously limited.

My desire to give and my possession of excess have combined into a simple yet prosperous proposition: a community-wide garage sale, proceeds benefiting Abort73.

My friends and I are cleaning out our closets and asking our families and neighbors to do the same. Then, on Saturday, September 12th, we are selling our excess and donating 100% of the profits to Abort73.

And we are encouraging you to do the same.

Our prayer is that through this yard sale, a seemingly miniscule event, in every detail the name of Jesus Christ would be lifted high and glorified. We also ask that if it be the will of the Lord, we would see a significant profit to support Abort73 in this difficult financial season.