Who is Most at Risk to Have an Abortion? 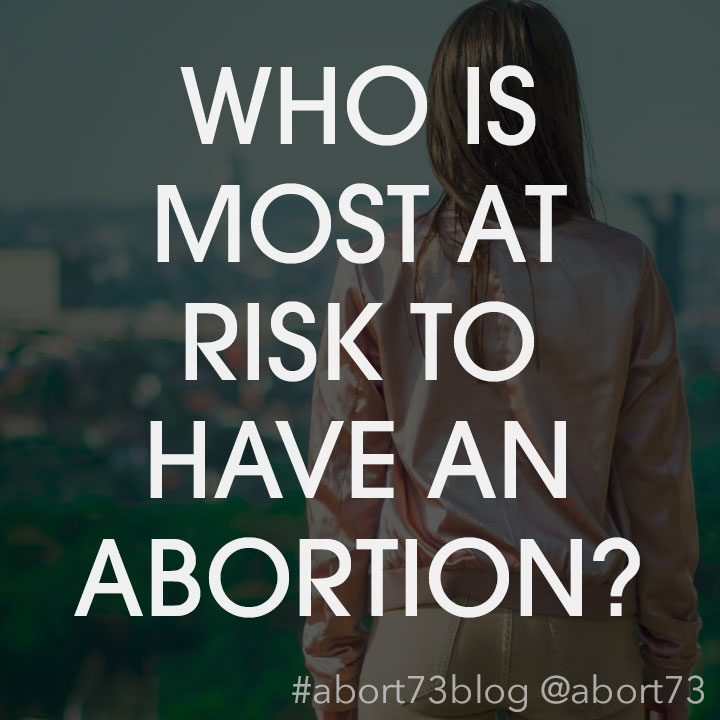 This is now my third post in response to the National Abortion Federation's (NAF) teaching textbook on abortion, Management of Unintended and Abnormal Pregnancy, which I finished reading last week. The first post looked at the factors most responsible for improving the relative safety record of abortion, at least as it relates to the mother (abortion is never safe for the baby). The second post examined the strange and rather arbitrary ban on partial-birth abortion. Today, I'd look to focus on how to identify those who are most at risk for having an abortion. I do this for two reasons.

First, as someone who has devoted my vocational life to persuading women (and men) not to have abortions, it's fairly important that I have a sense of who is the most demographically vulnerable to abortion. One of the great challenges for those who want to intervene on behalf of abortion-vulnerable children is the fact that you can't see them. They truly are invisible children, and the window for intervention is incredibly short. Walking down the street, there's no way to tell which women are vulnerable to abortion and which women aren't. That's where some of the statistical data from the NAF comes in handy. For anyone interested in combatting abortion, it helps us identify whether our programs and resources are being the most strategically deployed, amongst those who are the most vulnerable to abortion. This information has already shaped some of the markers Abort73 uses to advertise on Facebook.

The second reason I think this information is important is because it can help make women themselves more aware of their own relative vulnerability to abortion. Lots of the testimonies on the Abort73 website are from those who always considered themselves pro-life until they suddenly found themselves in a crisis pregnancy. I've heard abortion-rights advocates cynically suggest that most women are pro-life, except when it comes to their own abortion. The NAF textbook even includes advice on how to manipulate women who are ideologically opposed to abortion. They suggest reminding "religious" women of God's forgiveness and asking them, "Do you believe in a merciful God who understands what's in our hearts?" (55)  For women who have "always been against abortion," they suggest pointing out that "If she has made exceptions for rape or life endangerment, then she can see herself as having kept an open mind on abortion for certain circumstances, and is now expanding her acceptance of other circumstances (to include her own)." It's easy to think, abortion could never happen to me, but without vigilance and forethought, it can!

To those ends, these are some of the demographic markers related to abortion, all taken directly from the pages of the NAF text:

To summarize, if you're having sex with someone you're not married to, if you're 20-24 years old, if you're a minority or on Medicaid, if you live in a metropolitan area or in California, if you consider yourself young and healthy or you're a smoker, if you've had multiple sexual partners or started having sex at a young age, if you've already had an abortion in the past, then statistically speaking, you have an elevated vulnerability for future abortion. Be aware of that. I realize that some of the listed risk-factors cannot be modified, and I'm not suggesting that changing cities or states is a way to escape the reach of abortion. What I am suggesting is for each of us to take a long, hard look at the behavior decisions that so often lead to abortion, and make any changes that are necessary.

I want to finish this post by looking at an one more, admittedly-perplexing NAF statement relating to demographics and abortion. It comes from page 224 of the NAF textbook:

Women of races other than White are more than twice as likely to die from induced abortion (in the US). About one-fifth of the excess mortality risk among minority-race women is because of their later gestational age at the time of abortion.

This statement seems totally unaccountable to me. Why do minority women die from induced abortion at twice the rate of Whites? The NAF attributes a small portion of this imbalance to the fact that minority women are more likely to abort later in pregnancy, which makes the procedure more dangerous to the mother. But what accounts for the other 80%? The NAF offers no explanation and probably hopes nobody will ask. But in light of the American abortion-industries' long and sordid relationship to eugenic principles, is it possible that more minority women die by abortion simply because they're not considered as valuable as their White counterparts? No doubt economics plays a role in maternal mortality as well, but abortion's historic, disproportionate targeting of minorities may be evidence that something much more sinister is also in play.