The Overblown and Under-Reported Influence of Birth Dates 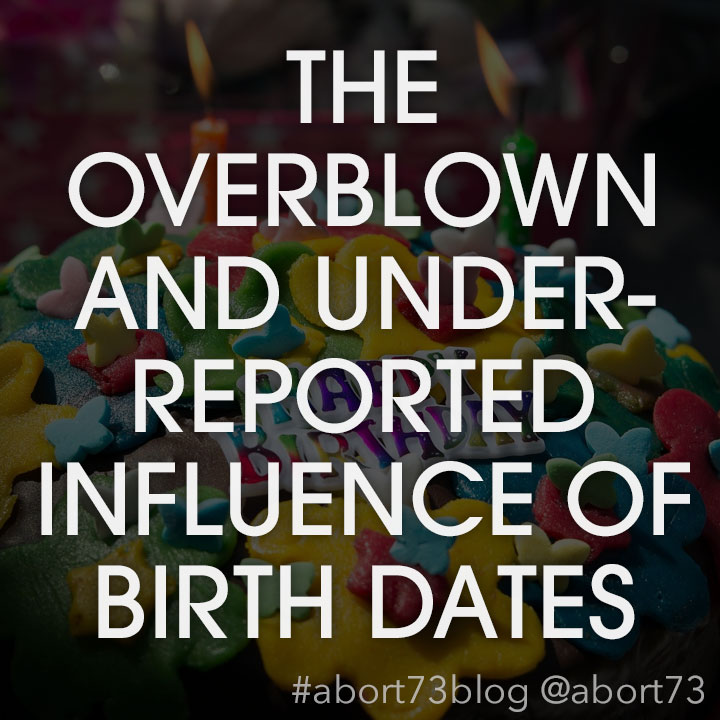 I’m not a regular reader of Scientific American. They’ve been publishing pro-abortion articles since before I was born and insist that “science” required them to endorse Joe Biden. Because science, of course, is infallible. It’s never misconstrued, never manipulated, and never allows for more than a single conclusion. That’s sarcasm, by the way. Scientific American is about as objective as the DNC, but one of their recent articles caught my eye. It’s titled “Inequality Before Birth Contributes to Health Inequality in Adults.” The basic premise is this: some of the chronic health problems people suffer as adults stem from things that happened to them in the womb. Think about the ramifications of that for a moment. The author writes:

Decades of research show that [diabetes, hypertension and asthma], usually diagnosed in adulthood, can reflect hardships experienced while in the womb. Children do not start on a level playing field at birth. Risk factors linked to maternal poverty—such as malnutrition, smoking, exposure to pollution, stress or lack of health care during pregnancy—can predispose babies to future disease. And mothers from minority communities were and are more likely to be subjected to these risks.

So if you’re keeping track at home, Scientific American has no qualms with abortion, which literally tears unborn children to pieces, but they are concerned about the less-significant health problems some children face in the womb—including the “particularly harmful” shocks that threaten children in the first trimester. “People disadvantaged in utero,” the article warns, “are more likely to have lower earnings and educational attainments.” That’s a problem, to be sure, but keep in mind that people who are disadvantaged in utero by abortion are dead. That’s a much bigger problem, and yet Scientific American makes no mention of abortion among its list of prenatal inequities. Instead they trot out the 21st century’s favorite bogeyman. “Structural racism,” the article tells us, is why black children suffer a disproportionate number of prenatal health problems.

When black children are disproportionally killed in the womb, it’s not considered a health inequality. It’s just “choice.” In fact, NARAL says the government is racist for not paying to abort more black babies. Yes, you read that right. But when black children suffer a disproportionate number of less severe health problems in the womb, that is a racist inequality—and society must be taken to task. Our collective outrage is rarely consistent or logical, but it does follow a familiar script. Everything one side does is good because of science. And everything the other side does is bad because of racism. It’s a handy metric that spares us the trouble of having to think critically.

As per usual, the Scientific American article equates blackness with poverty—as if they’re one and the same, makes no mention of the role single parenthood plays in impoverishment, and laments the absence of more government-run social programs that would surely have delivered us the utopia we’ve all been waiting for. But none of that is what I set out to discuss. I want to talk about birth dates and the overblown significance we’ve given them. Aside from the family we’re born into—which has a HUGE bearing on our future prospects—has anything more arbitrary than a birth date been given such an undue influence over our lives?

Malcolm Gladwell opens his book, Outliers, by highlighting the disproportionate number of professional hockey players who were born between January and March. It’s a statistical discrepancy that is incomprehensible until you trace it back to the placement patterns of the youth hockey leagues in his native Canada. Because kids born on the first day of the year are regarded to be the same age as kids born 364 days later, it’s a significant advantage to be born early in the year. The closer your birth date is to January 1st, the more imposing you’re likely to be relative to the competition. And because boys who are bigger and stronger naturally do better, they tend to get more playing time, more positive affirmation, and more focused instruction. The initial advantage afforded them by a fortuitous birth date often expands as the years go by.

Something of the same thing happens at the academic level, but this time the advantage falls to those born later in the calendar year. It’s generally said that the smartest people are born in September, but this is not intrinsically true. It’s true because they have an educational advantage. Those born in the fall tend to be the oldest in their class, which gives them an advantage that compounds over time. We know it as the Matthew Effect or the Pareto Principle. To those who have, more will be given. There’s no substantive reason why someone born in September should be smarter than someone born in August, but because of the academic calendar, that’s how it often plays out. Older students outperform the younger students, and the younger students rarely catch up.

Respective dates of birth can and do have a negative influence on full-term babies, but they really create problems for babies who are born weeks or months early. Unless you or a loved one has experienced it firsthand, premature birth is probably not something you’ve given much thought to. That’s understandable, but perhaps that should change. Premature birth is a significant social problem, but it’s compounded by our rather dated means of dating our lives. Some years ago, one of my daughter’s softball coaches mentioned to me that the smallest girl on the team had been born a couple of months before her due date. As a result, her birthdate fell just before the league cutoff. This meant she had to play 10u softball, despite the fact that she was younger than some of the girls playing 9u. How could a 10-year-old be younger than a 9-year-old?! Simple. By being conceived after the 9-year-old. For children, in particular, calculating their age from conception would be a far more accurate way to measure.

There are many reasons why kids “do not start on a level playing field at birth,” but one of the biggest is the fact that our lives do not begin at birth. They begin at conception. Think about it like this. Imagine two college freshman taking the same Intro to Drawing class. Neither took art in high school, but one has been drawing since before grade school. In theory, the art education of both students began on the exact same day, but in practice one is already light years ahead. Or imagine two high school students showing up for their first day of mandated language class—Spanish 1. One student is a 5th-generation American. The other was born to immigrant parents who still speak Spanish in the home. Though both students are beginning their formal Spanish training on the same day, one of them can already speak it fluently. Disparities like these are something akin to the developmental disparities that exist between the two hypothetical babies who were born this morning at your local hospital. One was a full-term baby; the other was 12 weeks premature. Though they share a birth date, their ages are vastly different. Birth, you see, is not the starting line.

American Scientist, not to be confused with Scientific American, reports that from an evolutionary perspective, the human birthing process presents a real conundrum. “Although evolution ought to favor low-risk, easy deliveries,” the article tells us, “this is not how it turned out for humans.” Unlike other singly borne mammals, “our babies cannot immediately get up, feed, and walk around like a newborn foal.” Simply put, human babies are born at an earlier stage of development than is normal for other animals who are born one at a time. Why? Because that is how God in his wisdom designed it. Or—for those who want a more scientific answer—if human babies stayed in the womb any longer, their head would be too large to get through the birth canal. This is how humans are able to have both big brains and narrow hips. The article continues:

The work of reproduction isn’t finished [when a baby is born]. For the first year after birth, human babies continue to develop rapidly at a fetal rate in both brain size and body maturity—a risky strategy that calls for a great deal of investment by the mother. Not only must she grow the baby inside her womb for 9 months, but also she must continue to care for and protect the helpless infant for another 12 months after birth… To grow into big-brained adults, our mothers have to give us a great deal of care and feeding. Of course, fathers make genetic contributions to the baby and can ease the mother’s task substantially if they provide for or protect the mother of their offspring.

Technically speaking, “gestation” is the period between conception and birth, and yet there’s a very real sense in which human babies are born at the gestational halfway point. What that means is that virtually all of the arguments that are made in defense of abortion could also be made in defense of infanticide. This is why ethicists like Peter Singer make no distinction between abortion and infanticide. He believes both practices are morally justified. And though I find his position reprehensible, he is right in this sense. Abortion and infanticide are moral equivalents. Either they’re both wrong or neither is wrong. This is true because, on the developmental timeline, birth doesn’t change anything of substance. The location of the baby changes, but the baby’s complete and utter dependence remains the same. In fact, in many ways, the burden of caring for a newborn exceeds the burden of being pregnant. But the hardship of having and raising a baby does not justify killing that baby—before or after birth.

The reason we celebrate birthdays is because dates of birth are observable and objectively marked. Dates of conception are not. Most people know the exact date they were born; few know the exact date they were conceived. And while there’s no denying the significance of seeing your baby for the first time—with your own eyes, conception is a far more significant marker on the developmental timeline than birth. Sure there are practical reasons for emphasizing birth dates as we do, but it does real damage on three fronts. It massively disadvantages those born prematurely, it unduly influences one’s athletic or academic success, and it feeds the bizarre fiction that life begins at birth. Babies who are born prematurely, and babies who develop chronic health problems in the womb, offer us a profound and compelling reminder that life does not begin at birth. Of course, the most tragic ramification of our fixation on birth dates is the fact that it prevents millions of innocent and helpless human beings from ever having one.