Abort73.com > Abort73 Blog > It Turns Out Abortion Laws Do Matter

It Turns Out Abortion Laws Do Matter 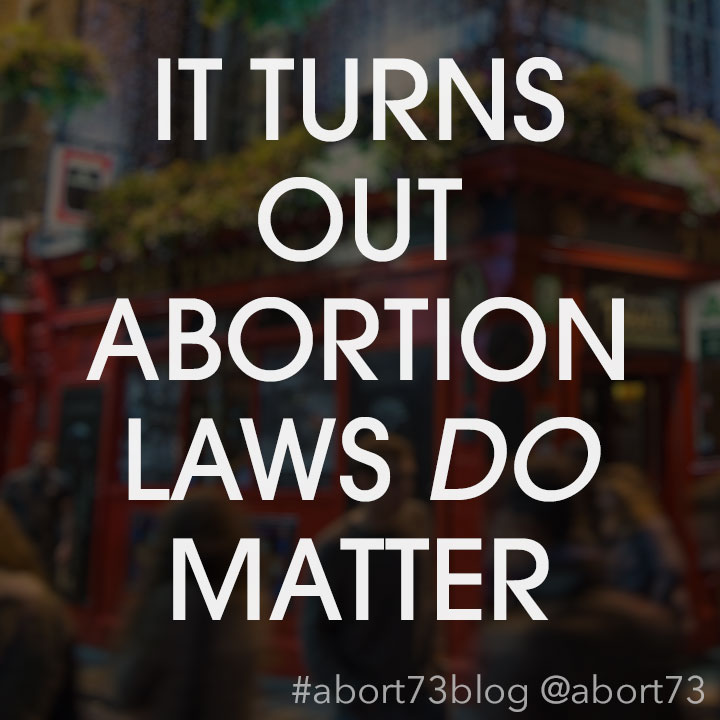 Abortion had been declining among residents of Ireland for 10 straight years, until 2019. Total resident abortions suddenly jumped from 2,879 in 2018 to 6,959 in 2019. That’s an increase of 142%. What could possibly account for such a huge jump in total abortions? Actually, that’s easy. Abortion was legalized in the Republic of Ireland in 2018. The new law went into effect on January 1, 2019. Instead of having to traverse the Irish Sea to obtain an abortion in the UK, Irish mothers can now abort their unborn children right in their own backyard—and the government pays for each and every one. Not surprisingly, total abortions increased dramatically.

Something similar happened in Northern Ireland as well. After a decade of steady abortion declines, the United Kingdom decided in 2017 to start paying for abortions for residents of Northern Ireland. Prior to this, women from Northern Ireland—where abortion was illegal—could have an abortion in England or Wales but had to pay for it themselves. The UK’s Department of Health & Social Care reports that abortion totals increased by 36% in the first quarter after the new ordinance went into effect and by 58% in the second quarter. In 2016, when women from Northern Ireland had to pay for their abortions, there were 724. In 2018, the first full year in which abortions were free, there were 1,053. That’s an increase of 45%.

Though abortion advocates have long asserted that legality has no bearing on a woman’s willingness to abort, the massive uptick in Irish abortions demonstrates again just how ridiculous such claims are. And it’s not as if the abortion industry actually believes this silly fiction. The reason they so vehemently oppose any and all efforts to regulate or restrict abortion is because they know that the more difficult it is to obtain an abortion, the less likely a woman is to have one. Just last week, NARAL again railed against the Hyde Amendment—which simply prevents federal funds from being used to pay for elective abortions. Their president declared the following in a July 7 press release:

Every day that the Hyde Amendment remains in place, it hurts women of color and women with low incomes just as it was intended to from the day Henry Hyde introduced it in 1976… As our country faces a public health crisis and a long-overdue uprising against entrenched white supremacy and structural racism, we must be more committed than ever to ending barriers to care like Hyde, which disproportionately affects communities of color.

Do you see what she’s arguing here? It’s quite remarkable when you actually carry her line of reasoning through. Ilyse Hogue is asserting—in the absence of all evidence—that the Hyde Amendment is intentionally and explicitly racist. Why does she call it a manifestation of “entrenched white supremacy”? Because she believes that while white women can afford an abortion, black women cannot. Never mind the fact that the average black woman in America is already 4-5 times times more likely to have an abortion than the average white woman. Apparently that isn’t enough for NARAL. If we were to give this rather insidious press release a headline, it would read like something from The Onion:

And yet this isn’t satire. This is NARAL’s actual position. In their economy, it’s not enough to simply give women the right to kill their unborn children. The government must also pay for it—because some women will only have an abortion if it’s free. “Restrictions on abortion care,” NARAL asserts, “endanger women and families already facing enormous hurdles to accessing care, especially Black and Brown women.” This is the language of bigotry. It patronizes and demeans minority women, and yet NARAL wields it relentlessly to supposedly combat racism. On Monday, they used the same chorus to predictably pan Tennessee’s new abortion restrictions:

Anti-choice, anti-freedom lawmakers in Tennessee’s state legislature pushed a bill effectively banning abortion under the cover of darkness, while the entire country grapples with an unprecedented pandemic and overdue uprising against entrenched white supremacy... The hypocrisy and cruelty could not be more clear.  But it’s not surprising: Governor Lee and his fellow anti-choice extremists have proven time and again that they’re more than willing to trade our fundamental freedoms in furtherance of their out-of-touch ideological agenda.

This “fundamental freedom” they’re protecting—the right to kill tiny and helpless human beings—didn’t exist for most of American history and was only read into the Constitution by an activist judiciary in 1973. NARAL, it seems, lives in Bizzaro World. The charges they level at their opponents and the virtues they claim for themselves are entirely backwards. The unmistakable implication of all NARAL’s outrage is that abortion restrictions prevent some women from having abortions. But that flies in the face of the narrative which asserts that women will go to any length to have an abortion—even if they have to break the law.

To those who oppose abortion, the abortion lobby argues that legal prohibition has no impact on its frequency. But to those who support abortion, they argue that regulating it in any way creates an undue burden for women who want an abortion but will no longer be able to obtain one. Media shills for Planned Parenthood are loath to point out that these are mutually exclusive claims. When the Supreme Court recently struck down Louisiana’s state abortion mandate—which required all abortionists to have admitting privileges at a local hospital, NARAL responded with the following:

Today’s decision is a win for women in Louisiana who will continue to have access to the time-sensitive abortion care they need… In this moment of turmoil for our country, fighting for the fundamental rights of every body is more important than ever. That’s why we cannot and will not back down in the face of these relentless attacks on our ability to determine our own destinies.

First off, NARAL is not fighting for the rights and “destinies” of every body. Their concern is exclusively limited to born bodies. Unborn bodies don’t get a second thought as they’re diced and discarded. Second, the assertion that abortion access in Louisiana would be completely squelched if abortionists were required to have admitting privileges is a massive overstatement. Perhaps NARAL never thought of this—since they’re so fond of judicial decree—but there is another way that abortion access could have been maintained. Doctors who perform abortions in Louisiana could simply secure the admitting privileges necessary to be in compliance with state law. Lots of abortionists in other states have done precisely that.

We can certainly debate how much pragmatic benefit admitting privileges provide in an actual emergency, but the point here is that even relatively minor abortion regulations are met with screams and howls from the abortion lobby. Let that be a warning and an encouragement. First the warning. Don’t believe for a second that the law has no bearing on a woman’s willingness to choose abortion. It has a HUGE bearing. Now for the encouragement. Abortion laws do matter—even incremental ones. Changing hearts and minds is the ultimate goal, but laws play a critical role too. To borrow a line of thinking from MLK, it may be true that the law cannot make a woman love her unborn child, but it can keep her from killing that child, and that’s pretty important!