In Praise of Abortion (Part 3): We Were Not in Love! 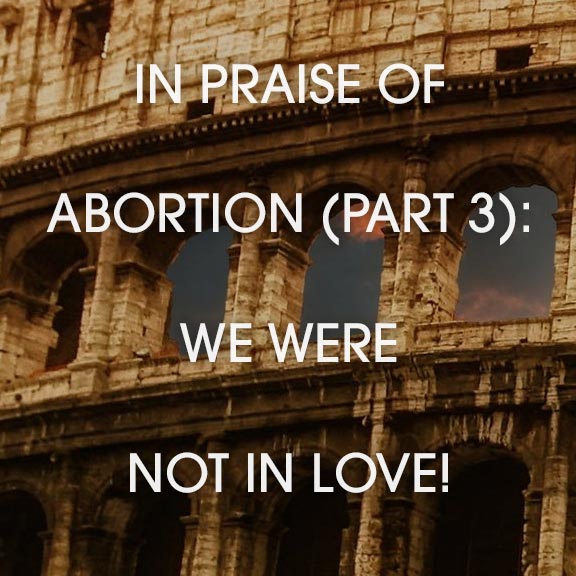 The reason we put our child to death is because his father and I were not in love. Sounds barbaric, right? And yet that’s the rationale provided us by a woman living in Rome—minus any reference to the terms “child” and “put to death.” Here’s how the 35-year-old explains her thought process in an April 11 submission:

Just this past month I found out I was pregnant. I am never late, and I knew that my partner and I may have had sex in the middle of my cycle—so I was a bit anxious. My partner is a friend and colleague. We were not a couple. When I told him we were pregnant, we both knew abortion was the only option as we were not in love and both just quit our jobs and took new jobs in different countries. Logistically and financially, it didn't make sense for us.

Did you catch that? We both knew abortion was the only option as we were not in love. How many mothers, I wonder, are not “in love” with the father(s) of their children? Would any suggest that their lack of affection gives them license to terminate the children born of such union? If not, what makes this argument any more reasonable for the mere fact that the child has yet to be born? To borrow a phrase, what’s love got to do with it? Is that what determines whether or not children have a right to life? Surely not.

At the risk of getting overly “religious” on people, one of things that has jumped out at me in my ongoing analysis of the pro-abortion testimonies we’ve received from post-abortive women is how cavalier they are about the men they have sex with. We weren’t a couple. We weren’t in love. We were about to move to different countries. And we were having sex. If people simply adhered to the biblical sex ethic, abortion would be a non-issue. In the United States, the price of sexual “liberation” is roughly one million abortions per year.

A woman who wrote to us from London on April 28 adds:

I'm an 18-year-old international student studying in London, UK. I'm in my first year of University and I'm not going to [even] explain why I couldn't keep this child, but for me, it was just not feasible. My boyfriend at the time was somewhat supportive but I'm quite independent so a lot of things we're done on my own, including the abortion.

This woman doesn’t bother with an explanation for why abortion was necessary, but she still tells us plenty. Despite being a freshman in college, despite not being in a stable, supportive relationship, despite her desire to remain independent, she was having sex with her “boyfriend at the time.” Birth control or no birth control, there’s no getting around the fact that sex is a gateway to pregnancy—but what does that matter so long as abortion is there to cover your tracks?! Forgive my sarcasm.

A 20-year-old woman from North Carolina shared the following on July 28:

I just turned 20, and my boyfriend of almost ten months and I found out I was pregnant. I will be a junior in college and a waitress/hostess at a local sports bar. Having a child was not in our plans and was a complete shock. I decided to go with the surgical abortion over the pill just because I wanted it to be over with as soon as possible .

Again, she’s in college. She doesn’t want a child, but she’s having sex with her boyfriend—and is then in “complete shock” when she winds up pregnant. How is it possible for so many college-educated women to be shocked by the fact that sex leads to pregnancy?

The last story of the lot actually came in on August 1, after part one and two in this series had already been published. It’s a long account from a 22-year-old woman in Omaha who further illustrates this tragic lack of discretion when it comes to sex. She writes:

I had an abortion today at 14 weeks, one day. I knew I was pregnant as soon as my period was a few days late. I took two tests to be certain, and they were both positive. I knew at that moment that I did not want another child—especially since I already have two kids with this baby's father, and he does nothing to help raise our children.

What’s the problem? She is sleeping with a man who has already impregnated her twice and shown himself to be a deadbeat dad. What’s the price of her continued folly? Her third child—whom she readily identifies as a “baby”—was killed by abortion. Like so many who have gone before her, she assures us that this was the “best option.” Though she says this matter-of-factly, it’s one thing to own up to an abortion in an anonymous web survey and another thing to own up to an abortion in public.

Returning to the 35-year-old woman living in Italy, I found it telling that despite her casual acknowledgment of her decision, she then revealed:

The complicated part (about having an abortion) was that we were living in Italy and neither of us knew much Italian. We wanted to keep this to ourselves, so we had to research the process in Italy.

Why did they want to keep the abortion to themselves? Assuring us that it caused her no emotional stress, why make the effort to hide it from her friends, family, and associates? The woman from Canada—whose story I addressed in part two—expressed the same hang-ups. She writes:

Eventually, I put in a call to the support system I can always count on—my mom. I have no intention to tell her. I don't want to disappoint, so I say, “I need to come home for a while, I can't explain.” It takes three days before I crack. "Mom, I'm getting an abortion,” tears streaming down my face. Tears streaming down her face, she says, "Can I tell you something, that you can't share with your stepfather? I had an abortion during the first three months of dating your dad.”

Abortion advocates will argue that the shame women feel about abortion entirely owes to the culture around them. “If pro-lifers weren’t heaping guilt upon women,” they assure us, “women would feel no need to conceal their abortion.” I am not convinced. When the Supreme Court struck down all state prohibitions against abortion in January, 1973, homosexuality was still listed as a psychological disorder and was broadly condemned by the culture at large. In the decades that have followed, society has systematically thrown off all its reluctance to champion the gay agenda—and yet the church still broadly believes the expression of homosexuality to be a sin.

On this front, the culture police don’t care a lick what the church thinks—happily bashing the bigotry of Christians while bending over backwards to celebrate gay pride. Not so with abortion. Something deeper is in play. As the cultural influence of Christianity continues to wane, the shame that is generally associated with abortion shows no sign of going away. If it were merely the opinions of a vocal minority that were keeping post-abortive women in the shadows, such guilt would be all too easy to overcome—but it’s not. Blaming abortion opponents for the reticence women feel about publicly acknowledging what they’ve done may fit Planned Parenthood’s narrative, but it doesn’t fit the evidence around us.