In Praise of Abortion (Part 1): Jesus Would Be Ashamed of You! 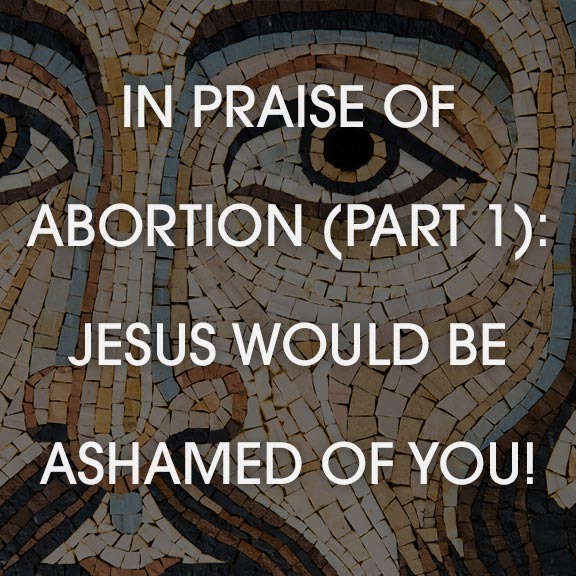 The time has again come to address the abortion stories we receive that are not filled with regret. So far this year, we’ve received eight of them. Some of them contain traces of pain and sorrow. Others simply sing the praises of abortion. Each time such a story comes in, I face a dilemma of sorts. Do I add it to the hundreds of abortion testimonies already housed on the Abort73 website or simply file it away? On the one hand, I like the authentic, unscripted voice our abortion stories provide. On the other hand, Abort73 has never been a neutral arbiter. From the very beginning, we have advocated a specific position—abortion is an act of violence that kills an innocent human being—and pursued a specific agenda—the protection of abortion-vulnerable children (and their moms!).

As an alternative to posting the stories outright or shelving them altogether, I generally post them in part—with commentary—on the Abort73 blog. This gives our dissenters a voice while allowing me to challenge the integrity of their assertions. By way of comparison, in the time it took us to receive eight stories of abortion celebration, we received 64 stories of abortion lament. I don’t claim that percentage to be representative of abortion regret worldwide—which is a truly unknowable number—but it does demonstrate that the vast majority of the stories we receive are stories of regret.

To get things started, here’s the shortest of the pro-abortion stories we’ve received this year in its entirety. It came to us from a 29-year-old Canadian woman on April 14:

I was 21 when I had my abortion. The doctors were very warm, and I suffered absolutely no physical harm. The father didn't know; he blew me off when I tried to tell him about the pregnancy. He's spiraled into a cocaine habit since. I don't regret my decision at all. I would have had to give up my life to bring an unwanted life into the world, condemning me and that child to being below the poverty line. I would have had to give up my postsecondary education, and would have been forever tied to an addict. You think there's something morally wrong with my decision, I think there's something fundamentally wrong with you for wanting to indoctrinate young people into the belief that their quality of life, their dreams, their hopes, their rights as human beings are second to the rights of a cluster of cells. Nature aborts more fetuses than human beings ever could—two thirds of all human conceptions. The Jesus I was raised to believe in loved women and was a beacon of support and love to impoverished people. He'd be ashamed of you.

Here are my observations:

First, this woman is comparing apples to oranges when she posits her life against her baby’s life. She says she would have to “give up [her] life to bring an unwanted life into the world,” but having a baby does not cost a woman her life in the same way that abortion costs a baby his or her life. By creating this false dilemma—it’s either my life or the baby’s—she justifies the violent death of a tiny child who has already entered the world’s stage.

Second, single mothers without postsecondary degrees are not condemned to poverty. It may be statistically more likely, but it is by no means certain. Once you’ve created a child, it’s too late to argue that you’re unable to support that child or unwilling to place that child for adoption.

Third, she dehumanizes her child by calling it “a cluster of cells.” Strictly speaking, we are all clusters of cells—which is a meaningless distinction. The point she ignores is that this “cluster of cells” is a living human being. Small, yes. Vulnerable, yes. Dependent, yes, but just as human as you or I.

Fourth, her appeal to natural miscarriages as a justification for elective abortion is nonsensical. Natural forces kill people every day, but we do not thereby assume the right to kill other people when it suits our fancy.

Finally, she asserts that because Jesus loves and cares for the impoverished, he would be ashamed of Abort73’s opposition to abortion. Consider this. Our position requires that parents sacrifice of themselves in support of their helpless, vulnerable children. Her position requires the literal, physical sacrifice of helpless, vulnerable children for the sake of their parents. Which of these positions do you think more truly embodies the ethic this woman appeals to?

Like all women and men who sing the praises of abortion, every argument she puts forth presupposes that the tiny human being who is growing inside her—her own son or daughter!—is no more significant than a tooth, a tonsil, or an appendix. Yes, it is extremely difficult to be a young, single mom trying to raise a child whose deadbeat dad is a drug-addict. I don’t dispute that in the least, but there are women all over the world who are living out that exact same scenario. The question is, does the difficulty of their circumstances give them the right to kill their child? If the answer is “NO!” for the born child, how can it possibly be “YES!” for the unborn child?