Abort73.com > Abort73 Blog > If a Man Fathers a Hundred Children…

If a Man Fathers a Hundred Children… 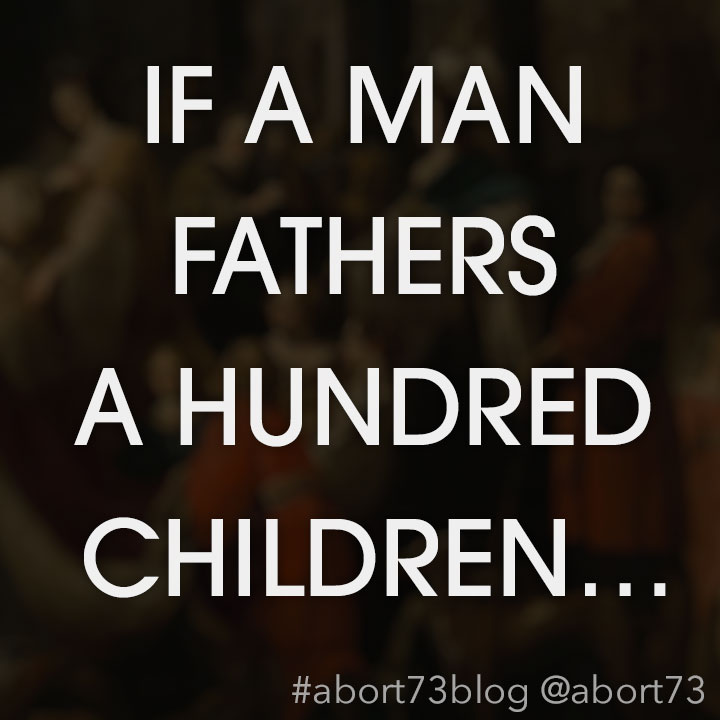 King Solomon is a conundrum among biblical authors. He is universally acknowledged as the wisest of the lot, and yet it’s hard to call him anything less than a scoundrel and heretic. Heretic may be too harsh; scoundrel is probably too generous. There’s a sense, of course, in which we’re all scoundrels and heretics, but that’s not what I’m talking about. By every indication, the sins of Solomon went well beyond everyday depravity. Not even Paul’s pre-conversion ledger can compete. And whereas Paul’s conversion occurred well before he started writing on God’s behalf, it’s hard to say whether Solomon was ever converted at all. He certainly didn’t write as if he were—at least not consistently. I referenced this passage a few weeks ago, while contemplating the relentless march of death. I’d like to return to it again. It comes from the ninth chapter of Ecclesiastes:

But all this I laid to heart, examining it all, how the righteous and the wise and their deeds are in the hand of God. Whether it is love or hate, man does not know; both are before him. It is the same for all, since the same event happens to the righteous and the wicked, to the good and the evil, to the clean and the unclean, to him who sacrifices and him who does not sacrifice. As the good one is, so is the sinner, and he who swears is as he who shuns an oath. This is an evil in all that is done under the sun, that the same event happens to all.

Solomon stopped just short of nihilism, but not by much. He argued that wisdom is better than folly and virtue better than vice, but he still maintained that nothing we do matters in the end. Everything is meaningless, he concluded. The same end awaits the righteous and the wicked, so enjoy life while you can because death is coming, along with complete and utter oblivion. Now contrast the resigned universalism of Solomon with Christ's words to the repentant thief on the cross, and his teaching on the final judgment in Matthew 25. According to Jesus, the righteous and repentant will join him in paradise on the very day of their death, but the wicked will be cast into “the eternal fire prepared for the devil and his angels.”

Solomon’s house was full of treasure, but he blamed God (in Ecclesiastes 6) for his inability to enjoy it and called it a great evil that his wealth would ultimately be left to a “stranger.“ By contrast, Jesus espoused the laying up of treasure in heaven, where moth and rust do not destroy and strangers do not break in to steal. Even the bestowing of a cup of cold water will not go unrewarded. Now back to Solomon. “If a man fathers a hundred children,” he continued, “and lives many years, so that the days of his years are many, but his soul is not satisfied with life’s good things, and he also has no burial, I say that a stillborn child is better off than he.”

If a man fathers a hundred children. That’s an interesting condition, right? How many men do you know who have fathered a hundred children? How many men in history have fathered a hundred children?! On the one hand, this is hyperbolic language which leans in on the Bible’s unequivocal assertion that children are a blessing of the Lord. But on the other hand, Solomon almost certainly did father a hundred children. What wouldn’t be possible for a man with one wife—or even 10 wives—would be downright conservative for a man with 700 wives, and 300 concubines. But what became of Solomon’s children? The Bible names only four. Is it possible that Solomon’s unyielding existential angst was somehow connected to this lack of named offspring? All that Solomon did, I Kings tells us, was recorded in “Book of the Acts of Solomon,” but that book has never been discovered. Most of Solomon’s history has been lost to us—so we’re left to speculate. Here’s what we do know:

King Solomon loved many foreign women, along with the daughter of Pharaoh: Moabite, Ammonite, Edomite, Sidonian, and Hittite women, from the nations concerning which the LORD had said to the people of Israel, “You shall not enter into marriage with them, neither shall they with you, for surely they will turn away your heart after their gods.” Solomon clung to these in love. He had 700 wives, who were princesses, and 300 concubines. And his wives turned away his heart… Then Solomon built a high place for Chemosh the abomination of Moab, and for Molech the abomination of the Ammonites, on the mountain east of Jerusalem. And so he did for all his foreign wives, who made offerings and sacrificed to their gods.

In defiance of God’s explicit decree, Solomon married foreign women, who worshiped foreign gods—like Molech, and turned Solomon’s heart away from the God of Israel. And these wives of Solomon made offerings and sacrifices to their gods. But what did they sacrifice? Chickens? Goats? Incense? Sadly, no. Satan—under the guise of Molech—demanded something far more abhorrent. Specifically, human babies. Children were the sacrifice of choice for this demon god, as repeatedly laid out in Leviticus:

Leviticus 18:21 - You shall not give any of your children to offer them to Molech, and so profane the name of your God: I am the LORD.

Leviticus 20:3 - I myself will set my face against that man and will cut him off from among his people, because he has given one of his children to Molech, to make my sanctuary unclean and to profane my holy name.

Leviticus 20:4-5 - And if the people of the land do at all close their eyes to that man when he gives one of his children to Molech, and do not put him to death, then I will set my face against that man and against his clan and will cut them off from among their people, him and all who follow him in whoring after Molech.

Lest you question what it means to “give” a child to Molech, the second book of kings clarifies when it gives an account of King Josiah destroying the altars to foreign gods so that “no one might burn his son or his daughter as an offering to Molech.” The giving of a child to Molech was human sacrifice, an abomination so grievous that God never even imagined it could be possible (Jeremiah 32:35). And though we can’t say for certain that Solomon’s own children were sacrificed en masse to demons, the circumstantial evidence seems to point that way. Solomon was never stoned for infanticide, but how does one stand up to—let alone punish—a wicked king at the peak of his wealth and power? And God’s own hand, I Kings tells us, was stayed by his love for David. “And the LORD was angry with Solomon, because his heart had turned away from the LORD… Therefore the LORD said to Solomon, ‘Since this has been your practice and you have not kept my covenant and my statutes that I have commanded you, I will surely tear the kingdom from you and will give it to your servant. Yet for the sake of David your father I will not do it in your days, but I will tear it out of the hand of your son.”

If children are a blessing of the Lord, then a man who fathers a hundred children should be blessed beyond measure. At least that’s the argument Solomon is making. And yet Solomon—who may have fathered hundreds of children and who was blessed beyond measure—considered himself worse off than a stillborn child. The question is, why? Why wasn’t Solomon’s soul satisfied? Why did he languish in such misery? The standard narrative is that Solomon wasted his life in wonton apostasy. He made pleasure an idol and thereby destroyed his capacity for it altogether. This is true, no doubt, but what if there’s something more specific at play? What if Solomon’s efforts to convince himself that dead babies enjoyed more peace and “rest” than he did (Ecclesiastes 6:5) was not entirely hypothetical?

King Solomon had the world at his feet—perhaps more than any other man in history—and yet he hated life (Ecclesiastes 2:17). Explicitly and unequivocally. It’s a contempt that feels wholly disproportionate to the circumstances of his life—unless. Unless the blood of Solomon’s own children was on his hands. Then his unyielding despair suddenly makes sense—mirroring the anguish of the hundreds of grieving women (and men) who have shared their abortion stories with Abort73. Whether you feel it at the moment or not, you cannot sacrifice a baby and leave your soul intact. There can be forgiveness and restoration, but the damage cannot be undone. Not in this life. “As you do not know the way the spirit comes to the bones in the womb of a woman with child,” Solomon observed, “so you do not know the work of God who makes everything.” Let that sink in. It is God who makes everything. It is God who gives life to every child in the womb. When you sacrifice that child to the god of Molech or the god of personal autonomy, you make one thing clear. You do not know the work of God, and you do not know the cost of violently setting your face against him.