Abortion and the Accidental Horcrux 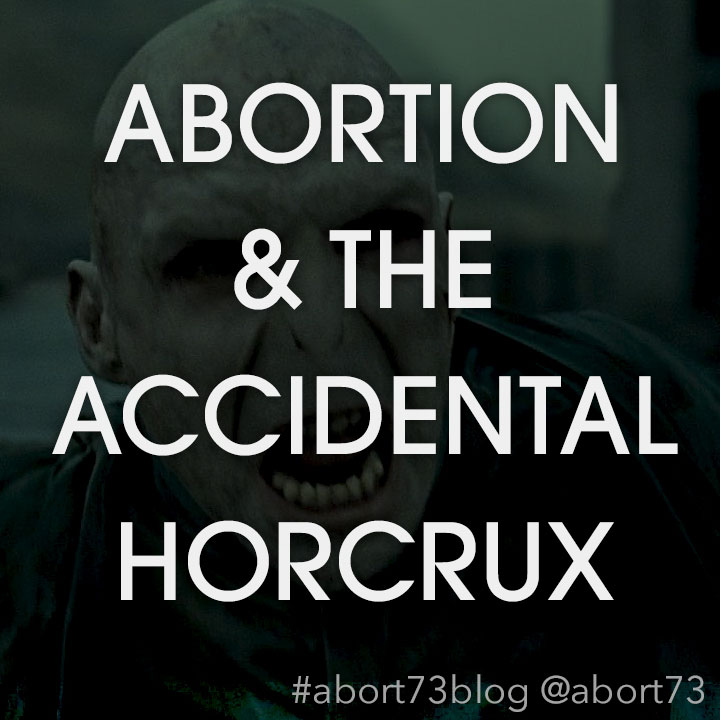 I was a college student when Harry Potter and the Sorcerer’s Stone first hit the bookshelves, so I didn’t pay it much mind. Ten years later, when the world-beating series ostensibly came to its conclusion, my two young children were still too young to notice. Thankfully, my family and I eventually caught on. We may have been late to the party, but the Potter books and movies are now a permanent part of our library, and we return to them often. I can’t say I’ve read The Deathly Hallows as often as theologian Jerram Bars, but I do share his appreciation for its themes. Of course, it was the penultimate book in the series, Harry Potter and the Half-Blood Prince, that first introduced the world to the Horcrux.

As any Potterhead can tell you, a Horcrux is the result of a soul-splitting act of dark magic—whereby an existing object becomes the receptacle for a fragmented piece of the spell-caster’s soul. So long as the Horcrux remains intact, the wizard to whom the soul belongs cannot be killed, even if his physical body is destroyed. It is a tool for achieving immortality, but it comes at a steep price. A Horcrux can only be created by first killing an innocent human being. In the Potterverse, you see, the act of murder damages the killer’s soul to such an extent that it can literally be rent in two and excised.

Lord Voldemort—the monstrous yin to Harry’s yang—became so enamored with the purported power of the Horcrux that he created seven of them, though only six were intentional. Ironically, in trying to escape his own mortality, he set in motion the very events that would ultimately lead to his demise. What was meant to secure for him power and safety brought vulnerability and weakness instead. By the time all seven Horcruxes had been found and destroyed, the dark lord was a shell of his former self. He tried desperately to save his life but wound up losing it, while Harry Potter—the Horcrux Voldemort never intended to make—saved his life by willingly laying it down.

If all this strikes you as overly fantastic—or overly unrelated to abortion, here’s where we pivot. Even though the Horcux is an artificial construct of J.K. Rowling’s mind, it struck me recently that many of the women who share their abortion stories speak in remarkably Horcrux-like terms. Specifically, the idea that a piece of one’s soul can be ripped away, transferred to another, or independently destroyed shows up time and time again. Consider the excerpts below, which all come from women who are describing the anguish abortion has caused them. Their stories are unprompted and unsolicited:

"The best way I can describe an abortion is this. It's like your soul has been ripped out of your body, and you will never be the same again." -- 52-year-old woman from Tennessee

"I have a piece of me missing that I will never get back—a hole inside of my soul. A part of me left when my baby was destroyed." -- 29-year-old woman from North Carolina

"When I saw my baby come out of me, I instantly felt my soul leave with it." -- 29-year-old woman from California

"I woke up empty—pain free and physically fine—but my heart and soul and entire existence was shattered and meaningless and dark and changed." -- 32-year-old woman from South Africa

"Having the abortion tore apart my foundation, damaged my soul and broke my heart permanently." -- 30-year-old woman from California

"My heart is numb. My soul left my body and hasn't come back." -- 21-year-old woman from California

"I walked in there with one soul, and left with none. I have never been the same since that day." -- 21-year-old woman from Pennsylvania

"I can only describe what happened to me next as a complete separation from my soul! At that moment not only did I murder my child, a precious gift from God, but also I killed my soul!" -- 35-year-old woman from Alabama

"I had an abortion on May 5th, 2007. I will never forget it because on that day I felt that a part of my soul was lost and I have yet to find it." -- 22-year-old woman from Louisiana

"Abortion is an eternal decision that leads to death, not only of your child but of your soul." -- 36-year-old woman from Kentucky

"I am the mother of 10 children; two are in college, one I miscarried and the other seven all had their lives ripped from them through abortion… I know my God is faithful, but my life bears an indelible scar that will never go away. Part of me died and has not been restored." -- 41-year-old woman from Nevada

And lest you think this “soul-splitting” damage is the domain of mothers alone, we’ve heard similar expressions from the fathers of aborted children. A 37-year-old man from Texas “never imagined the soul-crushing guilt [he] would bear for decades,” and a 32-year-old South African man declared that his “soul has been sucked out with [his] child.” In Harry Potter, the dark wizard believed that a Horcrux would secure for him an unencumbered future. The cost for his supposed safety and security was the sacrifice of an innocent victim. In the real world, abortion promises much the same thing at much the same cost.

For the uninitiated, you may be wondering how it was that Harry Potter became Voldemort’s accidental Horcrux. Though Rowling doesn’t provide us with a step-by-step explanation, here’s what we do know. It was prophesied that a soon-to-be-born baby would become a fatal threat to the dark lord's reign. Voldemort surmised this baby to be Harry Potter and, just as Herod had done millenniums before, sought to kill his newborn rival while he was still a babe. But after killing Harry’s parents, the killing spell Voldemort directed at Harry somehow rebounded upon himself. The blow wasn't fatal. Voldemort’s soul survived, but his body did not. Rowling tells us that it was the love of Harry’s mother, in willingly dying for her son, which saved him—but here’s an addendum worth considering. Is it possible that the act of killing a helpless and defenseless baby is an evil of such magnitude that Voldemort’s soul—which had already been split five or six times over—simply couldn’t survive the metaphysical strain?

I have no idea what J.K. Rowling’s position is on abortion. I won’t bother speculating, but the thematic connection between Voldemort’s unintended Horcux and the unintended “Horcrux” of abortion are worth contemplating. I would suggest that for every mother in the world, there is a very real sense in which each of her children becomes for her a living Horcrux. It’s as if a piece of her soul becomes physically wrapped up in the person of her child—which can cause her both great joy and great anguish. I am reminded of Simeon’s prophecy to Mary, which speaks of this selfsame duality.

When a mother dies, we might say that a piece of her soul lives on in her children, but when a child dies first, it’s as if a piece of the mother’s soul dies with them. Voldemort severely underestimated the cost of sacrificing his “wholeness,” and a world full of aborting women have made the same miscalculation—not realizing that the security they seek is an illusion. Countless mothers and fathers have already found this to be true. When their tiny unborn baby is vacuumed or flushed away, it's as if a piece of their own soul is destroyed in the process.