Abort73.com > Abort73 Blog > “I knew I would have to save my child through an abortion…” 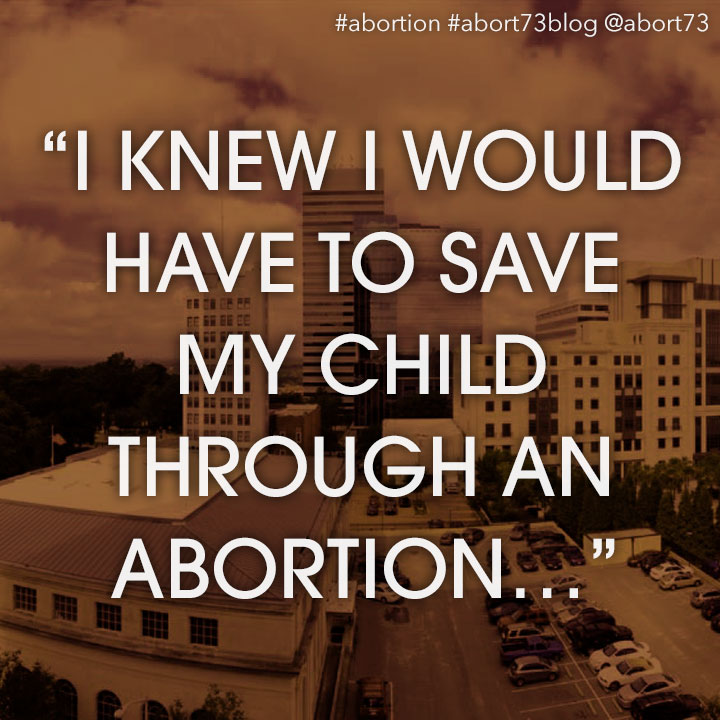 Yesterday, I did a brief, over-the-phone radio interview with NPR. I’m not sure when the segment will air, but they wanted my take on the 1-in-3 campaign—which is the latest effort to convince post-abortive women to go public with positive abortion stories. NPR contacted Abort73 because we’ve amassed a fairly substantial archive of online abortion testimonies over the years, and most of them do not paint abortion in a positive light.

Nevertheless, we do on occasion hear from women who express gratitude for the abortions they’ve contracted. Percentage-wise, they make up less than 5% of the testimonies we receive, but it would be dishonest to simply sweep their stories under the rug or pretend they don’t exist. Every time one comes in, I am both grieved and challenged. We received one such testimony in October and another in November—both of which I’d like to share.

The first comes from a 26-year-old woman in Elmont, NY. She writes:

I was nine weeks pregnant when I found out. I felt numb and cried. I was in a healthy, loving relationship on birth control. Even though my boyfriend and I had discussed babies in a year or two, right now was not the right time financially or emotionally. Terrified, I booked an appointment for a surgical abortion the next day. I was afraid to tell my boyfriend, but he took my hand and told me he agreed with and supported my decision. We would both be heartbroken, but we weren't going to bring a child into the world whom we couldn’t give everything to…

I’m going to pause there and jump to the second testimony, which comes from a 24-year-old woman in Columbia, SC:

I was in an abusive relationship. About a year in, we learned that I was pregnant. My boyfriend had been stealing my birth control pills from my purse and cabinet to intentionally impregnate me—against my wishes. I initially hoped that carrying his seed would bring about a change of behavior, but one day he choked me in the kitchen for no reason—and only released me because his mom was in the next room and heard my feet shuffling in an attempt to breathe. He released me, and I dropped to the floor. It was at that moment I knew I would have to save my child through an abortion…

Notice that both abortion stories share this same, perverse theme: abortion is a way to “save” my child. Also notice that both women were using birth control and still wound up pregnant. I mention that as an aside, but it’s worth considering in its own right. Finally, listen to the way these women talk about their children—whose lives were both violently ended through abortion.

The woman in New York explains:

I don't regret or feel guilty over my abortion. I am heartbroken to know I ended my child's life but know in my heart it was the right decision. I come from bad parents and want to give my child every opportunity to live a wonderful life.

The woman in South Carolina adds:

It was a difficult decision, but I wasn't even in a position to protect myself, so I knew I would fail at protecting our child. I wasn't ready to become a mom, but upon learning that I was pregnant, it became the most indescribable experience to know that there was a living being inside of me—depending on me. A person that I created. A person I loved enough, not to allow to enter a world that I could not protect him/her from. I prayed about it all, and I found peace in knowing that God understood my heart, and he's helping me each day to become the person I need to be in order to be a great mom to my next seed—whenever he sees fit. My child is resting in the presence of God, although I still cry sometimes because I wish he/she were here with me.

The term “self-fulfilling prophecy” comes to mind. For fear that they will be bad parents, these women killed their children—which is the ultimate expression of bad parenting. Everything else pales by comparison. If you disagree—if you think it’s noble to kill children as a means of protecting them from future suffering—consider the lessons of Beloved. As I told the woman who interviewed me for NPR, I do not fear the impact that “positive” abortion stories will have. Even the positive stories are laced with tragedy, and the more abortion is talked about in the public square, the more apparent it will become that abortion is one of vilest perversions of justice the world has ever known. Whether the numbers of post-abortive women are closer to one in three or one in four, the more of them who go public, the better it will be for abortion-vulnerable children.