Abort73.com > Abort73 Blog > Mercy Killings Have Little to Do with Mercy

Mercy Killings Have Little to Do with Mercy 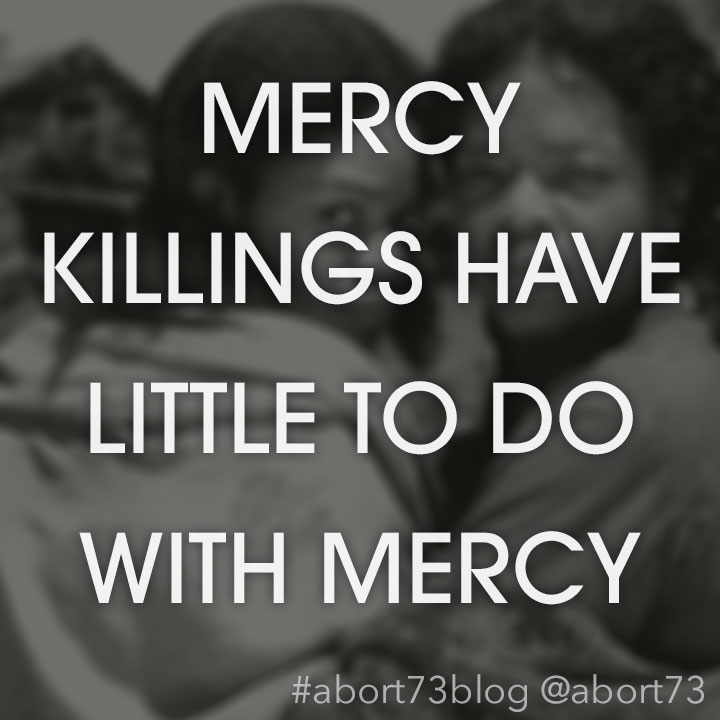 The following is excerpted from chapter three of my new ebook, Love the Least. To read Love the Least in its entirety download it for free and add it to your favorite ereader.

Towards the end of my collegiate career, I read Toni Morrison’s Pulitzer Prize winning novel, Beloved. The central character in the story is a runaway slave mother who, on the verge of recapture, slits the throat of her daughter to prevent her from reentering a life of slavery. I don’t know that I saw the connection to abortion at the time, but I have since reread the text in pursuit of the details I’d forgotten. Though I don’t know Morrison’s position on abortion, I found her account of this mercy killing far less sympathetic than I anticipated. After killing her daughter, Sethe is shunned by her own people—the very ones with first-hand knowledge of what she was trying to protect her child from. Her sons run away forever, terrified by what their mother had done. Baby Suggs, the town matriarch and Sethe’s mother-in-law, loses all hope, shuts herself up in her room, and dies. Beloved, the young daughter who was killed, haunts the family in a perennial fury until she finally shows up in bodily form to torment and almost kill her mother. Near the end of the book, we find this account of Sethe’s efforts to justify her actions to Beloved:

Sethe began to talk, explain, describe how much she had suffered, been through, for her children... None of which made the impression it was supposed to. Beloved accused her of leaving her behind... And Sethe cried, saying she never did, or meant to—that she had to get them out, away… That her plan was always that they would all be together on the other side, forever. Beloved wasn’t interested. She said when she cried there was no one... Sethe pleaded for forgiveness, counting, listing again her reasons: that Beloved was more important, meant more to her than her own life. That she would trade places any day. Give up her life, every minute and hour of it, to take back one of Beloved’s tears.8

As bad as slavery was, what Sethe did was worse. When she tried to convince another former slave there was no other way, he simply stated, “There could have been a way. Some other way… You got two feet, Sethe, not four.”9 Human beings are image bearers. We are not animals. We have two feet, not four. We do not eliminate suffering by killing those who suffer. Though the focus of this chapter is on the secular reasons for condemning abortion, the front line arguments in support of abortion are almost all spiritual in nature—despite the fact that they’re being made by secularists. Their goal is to move the debate away from objective, measurable criteria so as to place it in a realm that science and biology can’t speak to. In it’s crudest form, they are arguing that abortion-vulnerable children are better off dead. To demonstrate just how deplorable this “mercy killing” mentality is, we must return to Scripture. The Bible does not paint a kind picture of suicide, which is a self-inflicted mercy killing. How much worse are those who kill others in the name of benevolence?

The final chapter of I Samuel records the death of King Saul. When he was mortally wounded in battle, Saul commanded his armor-bearer to, “Draw your sword, and thrust me through with it, lest these uncircumcised come and thrust me through, and mistreat me.”10 If there was ever an appropriate place for a mercy killing, surely this was it. But Saul’s armor bearer feared to lift his hand against God’s anointed and would not do it. In 2 Samuel 1:1-15, the news of Saul’s death is brought to David through an Amalekite witness. Because the details from the 2 Samuel account don’t quite match those from the I Samuel account, there are two possible conclusions. Either Saul’s attempt to kill himself was unsuccessful and the Amalekite finished the job at Saul’s bidding, or as is more generally believed, the Amalekite was lying to gain David’s favor. In either case, the material point is unchanged. Despite the general consensus that Saul “could not live after he had fallen,”11 David had the Amalekite executed on the spot for thinking it commendable to put Saul out of his misery. This text gives no credence to the idea that killing someone is a morally legitimate means of sparing them from future suffering.

In a scenario that has striking parallels to the deaths of Saul and his son, Jonathan, J.R.R. Tolkien offers insight through the words of Gandalf in his conclusion to the Lord of the Rings trilogy. The Lord of Gondor, mad with despair at the pending fall of his kingdom and the condition of his dying, unconscious son, has commanded his men to set them both on fire. He believes it will be more honorable to die together, on his own terms, than at the hands of a cruel and merciless enemy. To that Gandalf says: “Authority is not given to you, Steward of Gondor, to order the hour of your death. And only the heathen kings, under the domination of the Dark Power, did thus, slaying themselves in pride and despair, murdering their kin to ease their own death.”12 Taking a life, even one that is suffering anguish with little hope of survival, is a grave and serious thing. At its core, it’s a prideful thing. Those who take such steps thumb their noses at the sovereign designs of God through suffering and set themselves up as the ultimate authority over their life or the life of another.