Abort73.com > Abort73 Blog > Connecting Abortion to the Gospel—Before and After Conversion

Connecting Abortion to the Gospel—Before and After Conversion 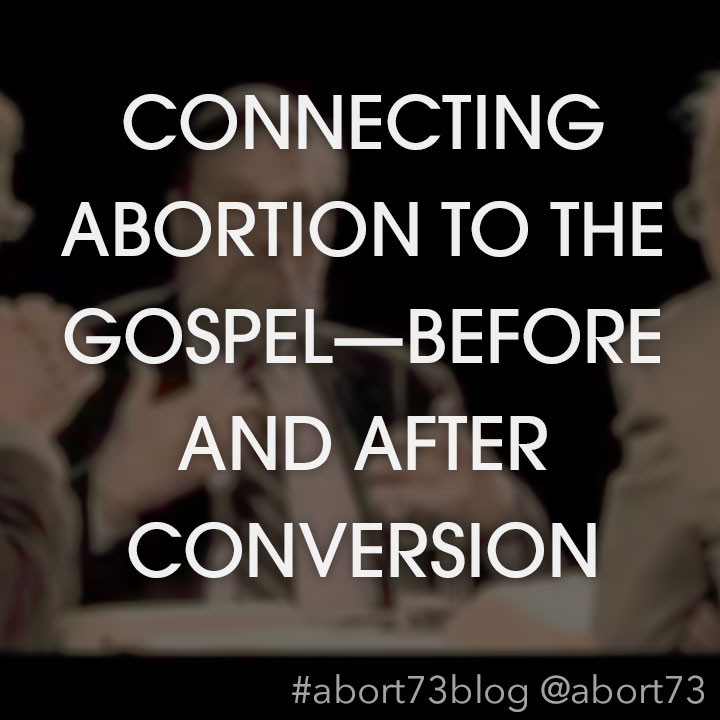 Last week I talked about the importance of combatting abortion in joy —which was a much-needed take-away for me from Desiring God's recent C.S. Lewis Conference. Following that conference, Doug Wilson, who made Christian joviality a point of emphasis in his Lewis session, sat down with John Piper for a two-hour live interview at Bethlehem College and Seminary. Once again, the discussion quickly turned to abortion. The question was, in light of America's apparent trajectory away from an externally Christian ethic, what's to keep believers from growing fatalistic and abandoning all efforts at cultural transformation—in favor of simply preaching the gospel? Here is Wilson's response:

In other words, you cannot preach the gospel without preaching repentance, and you cannot preach repentance in America today without reference to abortion. John Ensor has called abortion "the defining experience of this generation," and the church's general unwillingness to meaningfully address it has created all manner of spiritual chaos and confusion. Consider this post-abortion testimony, which was submitted through the Abort73 website earlier this month:

I had an abortion when I was 24. I was in a serious relationship with someone to whom I am now married. We felt we were not financially ready for the responsibility of parenthood. I think about it occasionally, but given the circumstances, I would do it again. I am now making a 6 figure salary and able to support my family on one income. I have a beautiful 11-year-old boy, and I love my life.

What do you do with a testimony like that? How do you respond to a woman who credits all her joy in life to the opportunities afforded her by abortion? More importantly, what does the gospel say to someone like this? Jesus loves you? Come to Christ; he'll make your life better? Here's the problem. The gospel can't appeal to felt needs if a person has no felt needs. No, the gospel must appeal to real needs, and one of the realest needs in all the world is for the bloodguilt of abortion to be removed. In a narrow sense, the bloodguilt of abortion condemns individual women and men. In a much broader sense, it condemns all of us—for allowing widespread child-sacrifice to happen on our watch.

We must remember that there are two components to guilt. There is an emotional component and a legal component—and they're not always in sync. It is a mercy when a guilty person feels guilty—it is sorrow after all that leads to repentance—but a lack of felt guilt does not negate the very real possibility that actual guilt exists. I would suggest that the unwillingness of most pastors to consistently preach against abortion is simply reinforcing the cultural assumption that abortion is no big deal. For fear of turning people away, they hold their tongue. In the process, testimonies like the one above pile up—testimonies from men and women who are really guilty, but don't feel guilty and so they don't repent.

John Piper followed Doug Wilson's remarks about abortion and the gospel by talking about where opposition to abortion fits in on the backside of conversation—after repentance has been preached and received. This is what he said:

After you repent, John (the Baptist) says, "Bear fruits worthy of repentance." In other words, as soon as you preach the gospel to unbelievers, they repent. They turn away from the sins that they know. Their next question is, "What should I do tomorrow?" And all the New Testament epistles are written to answer that question. You cannot not talk about how to live. Because the Christian life is calling you out of darkness, into light. We live and relate in a real world. The real world is full of questions. I think the moralist, fundamentalist church that I grew up in … simply sidestepped, over and over again, questions that were pressing right on them—[questions like] "OK, I'm a Christian now, you've got me saved, I am born again. What do I do?" And if the answer is only, "Get another person born again," after about ten of those or 20—this was very real for me in college—evangelism [starts] to become meaningless.

Why does evangelism feel meaningless in that context? Wilson compared it to a multi-level marketing scenario and Piper concurred. "It felt like I was asking people to join, what?" What were they joining? And what was their primary objective after joining? To get more people to join! This sort of frenetic emphasis on new conversions may add people to the register who are intent on avoiding hell, but it leaves them with little understanding of who God actually is and what he requires of his people. With that in mind, consider this excerpt from a 24-year-old in Reno, NV who also shared her story with us this month:

I am a Christian. I was raised Christian, and I was very involved in my church. I was completely pro-life. During college, however, I decided to experiment. I was smoking, drinking and having protected sex. One night ... the condom broke. BAD. We got the PLAN B pill as soon as we could, just to be safe. I had been in this situation before, and been fine, so we went on with my life and the partying and medications. Three weeks, a couple miserable mornings and a missed period later, I caved and got a test, which came out positive.  I called my boyfriend and we talked for HOURS about what we should do, but our main concern was my lifestyle, my medications, the fact I took Plan B, and the fact that both our families and ourselves were broke, and we were both in roommate situations and planning on moving to different cities in a different state. Adoption was out of the question for me, as both of us had family members working for adoption agencies, and we had heard enough horror stories to know we felt unsure and unsafe letting anyone else raise our kid. My family and a lot of close church friends had always talked crap about anyone we knew who ended up expecting a child out of wedlock, and my parents, for some reason, always want to believe I'm still a virgin...

In the end, after much thought, we got the abortion. It was done at a clinic with a lot of experience. It was totally painless, everyone was extremely kind and very caring...

I have no regrets on my decision. I mourn for my lost baby, which I do and did consider to be a human being, but I went with my instinct, and I have no reason to believe God is angry with me. When I pray, I am comforted and reassured…. my heart feels warm and light.

Much could be said about these remarks, but surely this is a tragic illustration of precisely the point Piper is making. When you don't teach believers how to think, process and live in a broken world—after conversion—you set them up for disaster. You wind up with a church full of young believers who are "completely pro-life," until they're pregnant—and who find peace and reassurance in their prayers, as they obliviously live in open rebellion against the Savior who died for them. I recently read an essay by Thomas F. Torrance that is well worth considering. He says at one point:

It belongs to the very heart of the Gospel that the Word of God who was the eternal Son of God, of one being with the Father,... chose in his love to become incarnate in Jesus Christ, was conceived through the Holy Spirit in the womb of the Virgin Mary, and became a true human being. It is surely to him who became a holy embryo in the Virgin’s womb, and was born of her to be the Savior of the world, that we must go, in order as Christians to understand what the unborn child is as an embodied human soul… In becoming a human being for us, [Jesus] also became an embryo for the sake of all embryos, and for our Christian understanding of the being, nature and status in God’s eyes of the unborn child in his/her body and soul. To take no thought or proper thought for the unborn child is to have no proper thought of Jesus himself as our Lord and Savior or to appreciate his relation as the incarnate Creator to every human being.