Abort73.com > Abort73 Blog > Combatting Abortion from a Place of Joy

Combatting Abortion from a Place of Joy 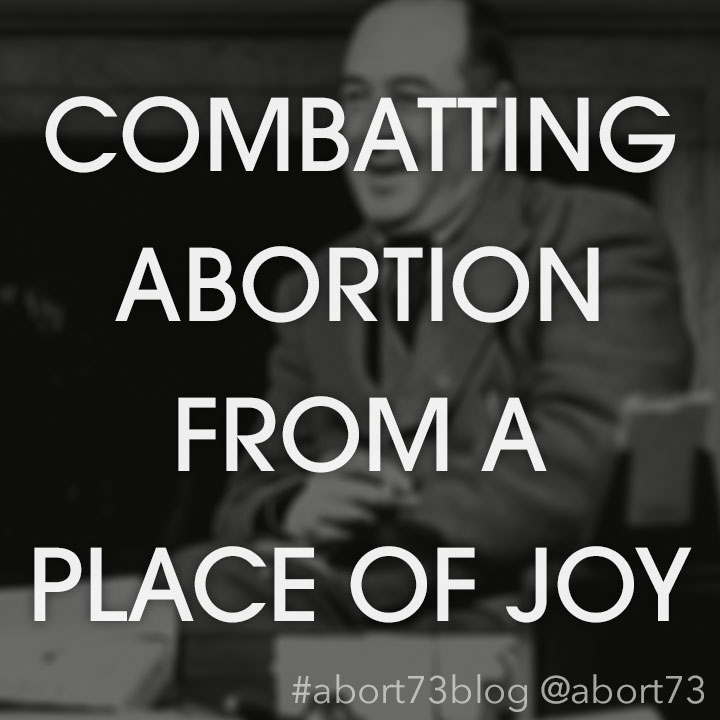 On the way to the Together for Adoption conference earlier this month, I listened to seven sessions from Desiring God's recent C.S. Lewis conference. They made quick work of a ten-hour drive. During the speaker's panel, one of the topics discussed was Christian joviality—in the context of a dark and suffering world. What does it mean to be sorrowful, yet always rejoicing? Doug Wilson, who introduced the concept the night before, got the ball rolling this way:

True joviality has to be understood as an act of defiance. The world is a mess. The world is fallen; it's filled with wickedness…. If you're celebrating because [you don't realize you're in a battle], then you're just not clued in, but if you are … feasting [amidst the battle], it's an act of defiance. It's a declaration of war. It is the recognition that this is how we fight—(as) cheerful warriors.… We should fight like a cavalier and not like a thug…. We must fight, but the person who fights like a cavalier is an attractive leader. He's going to attract more people to his side.

Connecting his argument to Lewis, Wilson points to the White Witch, who mirrored Judas in her criticism of wanton celebration. Though both villains couched their complaints under the guise of frugality, their ultimate aim was to redirect all "wasteful" expenditures into their own accounts. When the woodland creatures of Narnia celebrated Christmas in opposition to the witch's decree, it was an act of defiance—a fist-in-the-air to her tyranny and oppression. Christian joy, Wilson believes, operates in the same way. To be happy in a world of despair is not a declaration of ignorance; it is a declaration of hope.

The pragmatic benefit of this, Wilson notes, is that our "fighting"—and we must fight—becomes far more attractive to the watching world. If you wonder how this might apply to the issue of abortion, Wilson gives us the application himself. Pro-live activism is the very example he uses to flesh out this principle in practice. He continues:

Think of a pro-life activist who says, "But they're killing babies, it's terrible and the whole world is falling apart. The whole world is going to hell." And so they write their letter to the editor with a fisted crayon … what I like to call the spittle-flecked letter. [You] can't say, "But, abortion is so important, I've got to do it this way." I would say, "No, no. Abortion is so important, you must not do it that way." You're not venting, you're fighting. And if you fight, you want to fight effectively, you want to use your head, you want to keep your cool, and part of this [requires] joviality."

Consider again Wilson's admonition. You're not venting, you're fighting. And if you fight, you want to fight effectively. Last week, I decried the anti-anti-abortion bias—the unwillingness to enter the fray on behalf of abortion-vulnerable orphans. This week I will decry something else—the failure to fight well. Most anti-abortion advocates are good at moral indignation. We know how to play that card. We've got outrage down pat, but far fewer are good at calmly, rationally demonstrating the injustice of abortion. Some would say that to be calm is to not understand what's at stake. Doug Wilson believes the opposite, and I'm inclined to agree—for two reasons.

First, in a very real sense our tactics must be evaluated by our success and failure. Having the truth on our side is not enough. Having moral outrage on our side is not enough. Are we convincing people? We are called to be innocent as doves and shrewd as serpents—which is why our defense of abortion-vulnerable children must be winsome. If it is not, more children will die. And this is why presentation and delivery are so important. Arguments are not enough. Pictures are not enough. We must be able to deliver them in ways that people respond to. We must be able to deliver them from a place of joy.

Second, life is too important to be lived in the absence of joy. If we can't exhibit joy amidst the trials and tribulations of our life, what business have we trying to usher more people into the same misery? This is no less a challenge to evangelism as it is to pro-life activism. If Christianity doesn't "work," so to speak, why would anyone else want to embrace it? Abortion at its core is a declaration of pessimism; birth is a declaration of optimism. One believes the difficulties of life are not worth challenging; the other believes the difficulties of life can be overcome. In light of these underlying ideologies, how can we who trumpet the side of hope be mired in cynicism and discontent? What kind of message does that send? Combatting abortion is not ultimate. Joy is ultimate. That is what we're fighting for. C.S. Lewis says it this way in The Weight of Glory:

To be happy at home … is the end of all human endeavour. As long as we are thinking only of natural values we must say that the sun looks down on nothing half so good as a household laughing together over a meal, or two friends talking over a pint of beer, or a man alone reading a book that interests him; and that all economies, politics, laws, armies, and institutions, save insofar as they prolong and multiply such scenes, are a mere ploughing the sand and sowing the ocean, a meaningless vanity and vexation of spirit…. Great scarifies of this private happiness by those who have it may be necessary in order that it may be more widely distributed. All may have to be a little hungry in order that none may starve. But do not let us mistake necessary evils for good…. A sick society must think much about politics, as a sick man must think much about his digestion; to ignore the subject may be fatal cowardice for the one as for the other. But if either comes to regard it as the natural food of the mind—if either forgets that we think of such things only in order to be able to think of something else—then what was undertaken for the sake of health has become itself a new and deadly disease.

I preach this to myself as much as to anyone else. We are not fighting to save abortion-vulnerable children unto a meagre life of bitterness and anger. We are fighting to save them unto a life of joy—a life enjoyed to the glory of God. And though their ultimate experience is largely beyond our reach, our own experience is not. Vitriolic fist-pounding is not the ultimate expression of defiance in this godless, child-killing culture. No, that is merely what's expected. Rather, to daily do battle against sin and darkness—and still be happy—that is something truly profound. It is not a joy built on ignorance; it is a joy built on the knowledge of what is paramount and what is not. That is the ultimate act of defiance. So, as we fight for the lives (and joy) of those threatened by abortion—and we must fight—let us refuse to be miserable ourselves.