Abortion is Never Not Uncomplicated 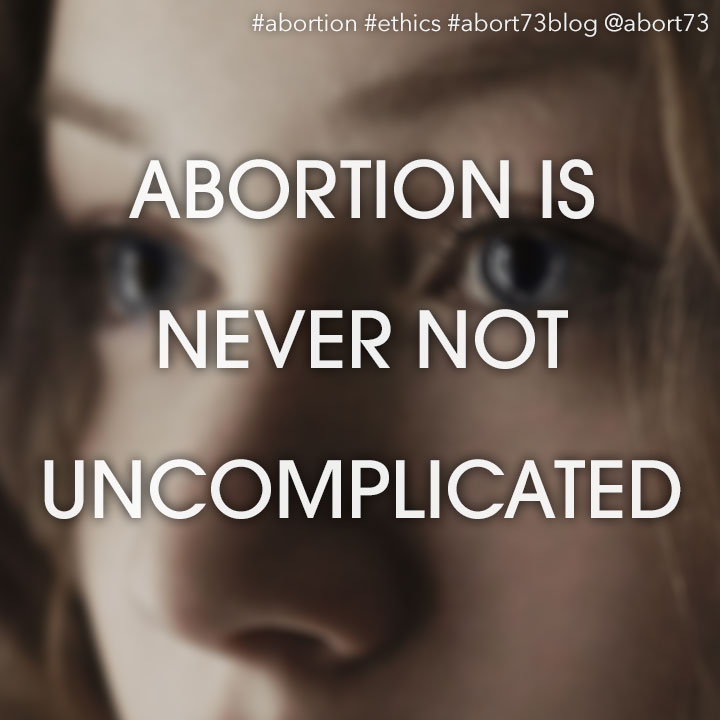 The title of this post takes a simple statement—abortion is not complicated—and says it in a complicated and confusing way. Why? Because the issue of abortion is both simple and complex; it is clear and complicated—as evidenced by an abortion-advocating feature that appeared in Salon magazine last week. It is titled, “The abortion I didn’t want.”

Author, Caitlin McDonnell, writes in the subtitle, “After [my abortion], I felt grief, emptiness -- and relief. Why don't we tell stories that are emotionally complicated, too?” She’s right about one thing. It is the emotion of unwanted pregnancy that makes abortion such a complicated and contested issue. The ethics of abortion are rather simple.

To me, the most interesting aspect of McDonnell’s piece is the description she provides of her principled refusal to tell the abortion clinic staff that she wanted an abortion. She firmly believed that she needed an abortion, but she could not bring herself to say she wanted it. She writes:

During my intake at the women’s clinic, I told them that I [couldn’t] say I wanted an abortion but that I thought they should do it anyway. Understandably, they didn’t know what to do with me… They left me alone and argued among themselves. I just kept repeating my outrageous statement. At one point they tried to send me home. “We think you should think more about it,” a clinician said. I was firm. I wasn’t leaving. But I couldn’t say I wanted it. Every alternative they offered made me shake my head no; I couldn’t say anything more affirmative than “you should do it.” I needed to end my pregnancy — and not think about being an arbiter of life and death, at least not that day. I asked them to hold me down because I was afraid my body might resist.

Her body did resist, she tells us, but the restraining hands held her down until the abortion was over. “What they did for me that day,” McDonnell assures us, “was heroic and kind.” I am less convinced. She continues her narrative by describing her post-abortion condition:

A cold wind of grief blows through me.  My body feels empty, like a dried rind. [My boyfriend] drives me home in silence. I lie on the bed and pull thick blankets over me, trying to turn off the resounding emotional pain. He leaves the house and goes on a walk. I take a pill to help me numb. It will be years before I begin to process this day.

McDonnell then reveals that the father of her child—the man she “barely knew” but had moved across the country to live with—had forced her hand. By his own admission, his refusal to support McDonnell and their child was “the worst thing [he was] going to do in [his] whole life.” But he did it anyway. McDonnell tried for weeks and months to persuade him—naming their child “Malachai” along the way, but Malachai’s father was unmoved. No baby was going to ruin his personal aspirations, and so he graciously demanded that abortion free him from his unwanted predicament.

Interestingly, McDonnell admits that “life begins at conception”—which is something like admitting that gravity holds you down. Nevertheless, she goes on to assert that “women (must) have dominion over the life inside their own.” Never mind that the dominion being asserted in this case came almost exclusively from the man whom she loved too much. What she is essentially saying is that women must have the right to kill the life inside their own—though she avoids saying it in these terms. In fact, after making a distinction between grief and regret, McDonnell states that she wanted to be a mother and “knew [she] was terminating a potential life.”

Did you see what she did there? After already affirming that life begins at conception, she slipped in the word “potential” as a means of softening the emotional blow. Using the word “terminating” in place of “killing” does much the same thing. The reason abortion has become such a complicated issue is because we so often allow our emotional longings to cloud the facts, instead of simply relying on the data.

For a while, McDonnell found solace in the notion that her abortion was inevitable. She imagined it to be something entirely beyond her control, like the washing over of a gigantic wave. In the end, she finally had to admit that the abortion was a choice she made, not one that was made for her. Does she regret it? She’s not sure, and she’s not alone. Though most of the abortion stories submitted to Abort73 are unequivocally filled with regret, a few fall into the “complicated” category. One such story recently came to us from Australia:

I felt very alone and was not getting any attention from my husband, which is no excuse for what I did. I had an affair… After a couple of months, I found out I was pregnant. I was 5 weeks and 6 days on the day I aborted. I can still remember everything about it. I comfort myself in the fact that what I did was for the best of all involved… the situation was not one to bring a child into. I can only hope that one day, I will forgive myself.

Forgive herself for what? For killing her child? If abortion doesn’t kill her child, there is nothing to forgive. If abortion does kill her child, then what is all this nonsense about it being “for the best of all involved”? About two-thirds of the way through her article, McDonnell speculates about what would have happened if Malachai had not been put to death. She thinks she could have made it work as a single mom, but states: “my wanting a child at that point was not compatible with the reality of my circumstances and it would have tied me irrevocably to a man I didn’t trust.”

Herein lies much of the problem—or much of the “complication.” Caitlin McDonell was living with and sleeping with a man she didn’t trust. The wife from Australia was having sex behind her husband’s back. More times than not, the ethics of abortion only become complicated because we put ourselves in bad situations—men and women alike. We sleep with people we don’t care about and are unwilling to commit to. You can call the biblical sex ethic backwards and parochial if you like, but that doesn’t change the profound cost of forsaking it. For four decades, birth control has been touted as the get-out-of-jail-free card, but it simply doesn’t work! Sex wins.

If it weren’t for the arduous complications of promiscuity, the ethics of abortion would be a no-brainer. It kills an innocent and helpless human being! What is there to think about? What’s not to understand?! But when we add in all of the emotional baggage of unwanted pregnancy, we find a way to justify the unthinkable. At one point, McDonnell says of her wavering response to pregnancy, “It is the kind of choice nature makes for you if you don’t make it yourself.” This is true. Abortion is an act of war against nature. When nature runs its course, children live. When Planned Parenthood intervenes, children die.

Without question, Caitlin McDonnell is conflicted about her abortion. She shares her story in an effort to make abortion a more “normalized part of the human experience,” and perhaps because she is still seeking personal affirmation. Her therapist assures her that abortion is the “ultimate act of generosity,” but that of course is perversely backwards. True generosity is laying down your life for your child, not laying down your child’s life for yourself. Perhaps McDonnell knows that. Either way, we have very different objectives in the public sharing of abortion stories. McDonnell hopes more women will courageously follow her down a pathway that she grieves but wouldn’t change. I hope that in reading these stories, women will make changes to their narrative before they are left with anything so devastating to grieve as the violent death of their innocent child.