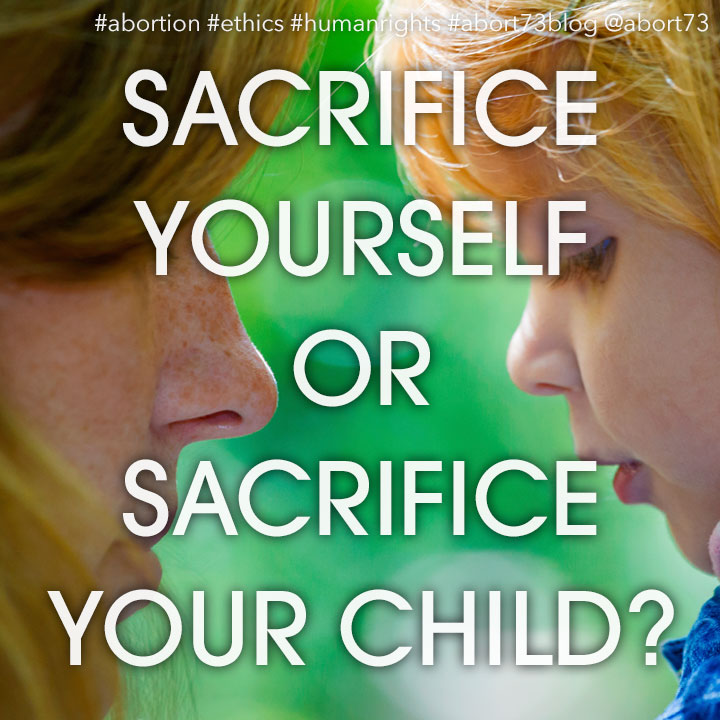 Sacrifice is a polarizing term. Some view it as a virtue. Others view it as a vice. For some, it represents an act of weakness. For others, an act of strength. But no matter what kind of connotations the term draws to mind, the merits of sacrifice depend wholly upon the context. Sacrificing yourself for another is noble. Sacrificing another for yourself is not.

Which is why Mary Elizabeth William's recent Salon article is such a perplexing one. The piece is titled, "So what if abortion ends life?" and concludes with the following declaration: "The fetus is indeed a life. A life worth sacrificing." I saw numerous Facebook references to the article in the days following its post. Al Mohler made it the subject of his Friday blog, but yesterday was the first time I read the article for myself.

On the one hand, Williams' concession that abortion kills a human being is an unremarkable one. Such concessions have been at the heart of Abort73's "Medical Testimony" page from the very beginning. Knowledgable, publicly-accountable abortion-advocates have affirmed this reality for years. It's not a concession they choose to make; it's a concession they have to make. The biology of human development allows no other alternative.

What struck me about Williams' article is not her admission of life's beginning, but rather her appeal to sacrifice. It is a perversely backwards one. Sacrifice has long been synonymous with parenthood. Sacrifice is culturally expected of parents but not the kind of sacrifice Williams is endorsing. Parents, as the stronger, more capable members of the relationship, make sacrifices for the good of their children. They don't expect their children to make sacrifices for them. After all, what do children have to offer? Can they work longer hours or survive on less sleep? Parents have lots of things they can sacrifice without actually sacrificing their lives, but children do not. All a child has is his or her life, and that is precisely what Williams demands be sacrificed. She even goes so far as to say, "If by some random fluke I learned today I was pregnant, you bet your ass I’d have an abortion. I’d have the World’s Greatest Abortion."

Not surprisingly, the article doesn't offer much in the way of substantive argument, but William's basic thesis is this: "All life is not equal." We can infer from the broader context that she is referring specifically to human life. All human life is not equal. That's what she's asserting. To support this claim, she appeals to two things: the dependence of unborn children and the decisions that are made to end human lives in other contexts.

The closest Williams comes to making a rationale defense of this position is to declare that the rights of the mother "automatically trump the rights of the non-autonomous entity inside of her." "Non-autonomous" is the classification she employs to make an ethical distinction between mother and child, but it would have been more accurate to say the less-autonomous entity inside of her. There isn't a person alive that is autonomous in any absolute sense. We all depend on sustained environmental input to survive. Just because children are comparatively more dependent than adults doesn't mean their lives are less valuable. You could just as easily argue the reverse, that their youth and dependence make their lives more valuable. After all, the younger the victim, the more years are taken away from them when they die. And generally speaking, things that are vulnerable deserve more protection, not less. Furthermore, in declaring herself to support "unrestricted reproductive freedom," Williams nullifies her point entirely. Because she believes women should be free to abort children for any reason, through all nine months of pregnancy, she believes women should be free to abort children who are already past the point of external viability. If a baby can survive outside her mother's womb, doesn't that make her autonomous by Williams' definition? And if she's willing to support the abortion of autonomous children, then her argument isn't even applicable in the first place.

Williams' second appeal is built on the claim that the inequality of human life can be seen on three different fronts: drone attacks, capital punishment, and terminal illness. Her argument goes like this. Because we kill people in war, because we kill violent criminals, and because we take people off life support, it must also be reasonable to kill unborn people. Without knowing Williams' specific positions on these issues, I suspect she would count herself among those opposed to the use of military drones and the death penalty. If that's the case, it seems a bit  disingenuous to appeal to military intervention and capital punishment as arguments in favor of abortion. Be that as it may, it is still relatively easy to point out the fallacies in her reasoning. Unborn children are not military targets who pose a violent threat to our country. Nor are they the accidental victims of a military intervention that is at least ostensibly designed to protect innocent people. Unborn children are not violent criminals who have been duly convicted of a heinous crime. And unborn children, if left alive, will continue to grow and develop. They will soon depart their comatose state, if you want to call it that, and have every prospect for a long and full life. All that to say, the examples Williams uses to support her claim have absolutely no connection to the ethics of abortion.

Williams closes her editorial by asserting that abortion saves lives, "not just in the most medically literal way," she says, "but in the roads that women who have choice then get to go down… I would put the life of a mother over the life of a fetus every single time." Almost every abortion argument eventually descends to this claim that it is medically necessary to save lives. Never mind that abortion is almost never medically prescribed and may never be necessary to save a mother's life. When every other argument is set down, this is where abortion advocates finally land. Williams puts a new spin on it by suggesting that abortion not only saves women's lives in a literal sense, it saves them in a figurative sense too. This claim is dubious at best, but let's assume it's true. We are still left with one HUGE problem. In this debate over whose rights should prevail and whose rights should be sacrificed, remember that the sacrifices in question are in no way equal. Parental sacrifice is real and significant, but it is not ultimate. Parents give up incalculable amounts of time and money, but they remain very much alive. Now consider that the required sacrifice on the other side is life itself. It is the ultimate sacrifice, and it is made without their consent.

Williams affirms at one point in the article that, "Throughout my own pregnancies, I never wavered for a moment in the belief that I was carrying a human life inside of me." She says she loved her children "from the moment she peed on those sticks." She is not alone in loving her unborn children, which raises an interesting question in my mind. Even those with no religious affiliation would likely agree with the Scriptural assertion that the greatest expression of love is the willingness to die for the beloved. What parent worth their salt wouldn't die for their child? And yet abortion-advocates consistently put forth the reasonableness of requiring children to die for their parents. And their argument goes like this: If the mother dies, the child will die. Now imagine some hypothetical situation, dreadful as it may be, in which your beloved, born child is trapped, and you have no way to save them—but you do have a way to save yourself, would you do it? Say they were drowning or stuck on a train track or locked in a burning building, and you had absolutely no way to free them. Would you stay with them until the end and die yourself or leave them to spare your own skin? I realize this an obscure example, and I realize it's potentially complicated by obligations and love for other children, but I still raise the question. Is it really so unreasonable for a parent to hold out hope until the very end, even at the risk of losing his or her own life? Isn't that what parents do?

People can be very clever in the arguments they put forward to explain why abortion is necessary and good, but at the end of the day, every one of them is a complete perversion of the natural parent/child relationship. Self-sacrifice is something to be honored and celebrated, but child-sacrifice may well be the most depraved act in all the universe. As a mother, Mary Elizabeth Williams should know that.