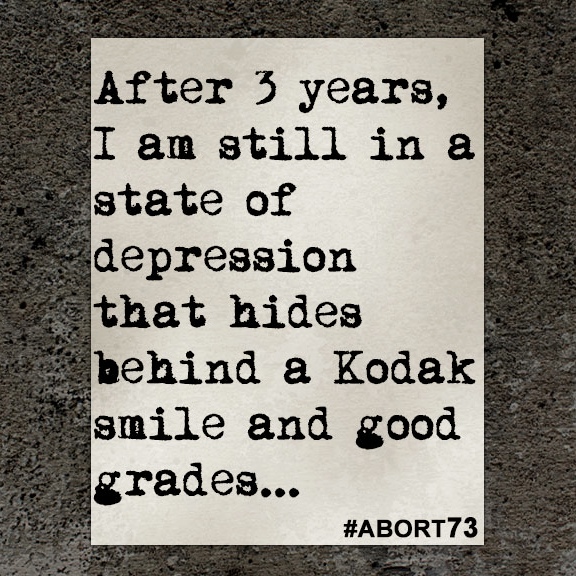 After 3 years, I am still in a state of depression that hides behind a Kodak smile and good grades...

I had an abortion on May 5th, 2007. I will never forget it because on that day I felt that a part of my soul was lost and I have yet to find it. I was 18 at the time and felt that there was no other alternative. My boyfriend and I were young and foolish, not financially stable and in no condition to be parents, so I made that heart wrenching decision. When I mentally decided that I was going to go through with it, my body became numb, my emotions became cold. As I lay on the bed as the procedure was being done, it felt as though I was going through an outer body experience. It was as if I spiritually removed myself from the situation. I tried focusing on the "ABC's of Success" poster that was mounted on the ceiling, but that didn't help. I gripped the nurse's hand extremely tight and looked in her eyes. I think she could tell how afraid I was. Once my baby was vacuumed out of me, I limped out of the room and what I saw next is what haunts me today. Before I opened the door to walk out, I turned around to look at the bed where I laid and saw remains of my child on the edge of it. My heart sunk, my soul collapsed, and I broke down crying. Indescribable feelings of guilt and remorse took over me, and that hasn't changed since. After 3 years, I am still in a state of depression that hides behind a Kodak smile and good grades. To anyone considering an abortion, DONT.