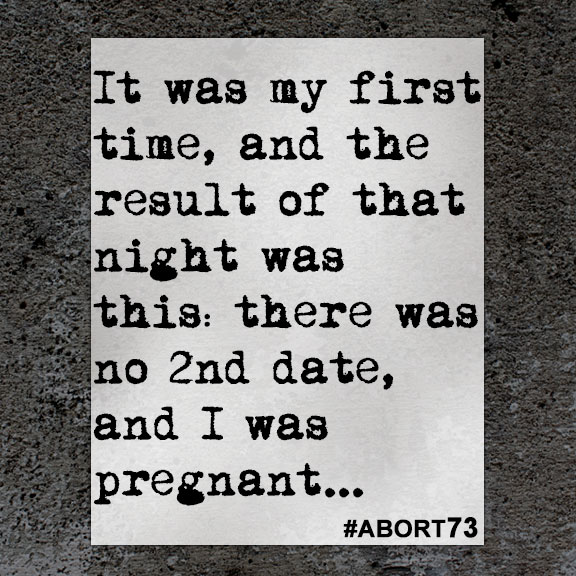 It was my first time, and the result of that night was this: there was no 2nd date, and I was pregnant...

I was a junior in high school and was totally infatuated with this boy. We finally had our first date, and I had thought this was the only way to keep him around. It was my first time, and the result of that night was this: there was no 2nd date, and I was pregnant. I just knew I would be disowned from my family. I lived with my grandparents. They were very traditional, and this would have been a disgrace to the family name. So I decided to abort the baby. No one besides a handful of people even knew.  I was not saved at the time, did not attend church and didn't understand that the consequences of having an abortion would follow me for the rest of my life.

My life went on, I married, and had a very healthy baby girl. Then her dad and I divorced. I remarried a few years later, and my husband and his family introduced me to the saving knowledge of Jesus Christ. We have been married 13 years, and we have a son together. During the course of these years and going to church, when there were sermons or the topic of abortion would come up, I would try to hold it together so that no one would know that I had done this. I had asked for forgiveness for this and believed that I was forgiven but the ashamed feeling and the thought of others knowing scared me.

Then one day, a lady from church was organizing an outreach for women. She wanted those that had gone through certain situations to speak about what God had brought them through. She approached me and asked if I knew of a woman that had an abortion and would be willing to speak of it. I know my eyes must have been as big as grapefruits. Right then she knew that it was me although at that time I WAS NOT WILLING TO TALK ABOUT IT. It was such an eye opening experience because this was God that directed her to ask me and He needed me to be restored. I will never forget that day. I decided to stand up and share my story, but I first had to tell my then teenage daughter. I shared it with her first and like any loving daughter she was so forgiving. Then I shared it at the outreach. It took everything I had to get up and speak to a room full of women and rattle all the bones that I had hidden for so long.

I started with 1 John 1:8-9. If we claim to be without sin, we deceive ourselves and the truth is not in us. If we confess our sins, he is faithful and just and will forgive us our sins and purify us from all unrighteousness. If we claim we have not sinned, we make him out to be a liar and his word has no place in our lives.

God is amazing. Afterwards, five women came up to me and said thank you for they had gone through the same thing and had not found forgiveness. I have since then shared my story many times and have lately had to stand on my beliefs when my daughter, now in college and single, found that she was pregnant. The young man wanted her to terminate the pregnancy but she was strong and knew what she believed in and did not want to go down the road that I had. She decided to have the baby. Two months later she miscarried.

I believe that God brings restoration. The Word states, "And we know that in all things God works for the good of those who love him, who have been called according to his purpose" (Romans 8:28). This is a promise that I stand on because I have witnessed it. God restored me from the horrible decision that I made so many years ago and since then I have been able to witness to other women and save my daughter from the heartache that she would have felt if she had listened to that young man. Thank you for allowing us/me to share our stories. I pray that it brings forgiveness and restoration to those that like me didn't know and reaches those young women that may be facing that very decision.