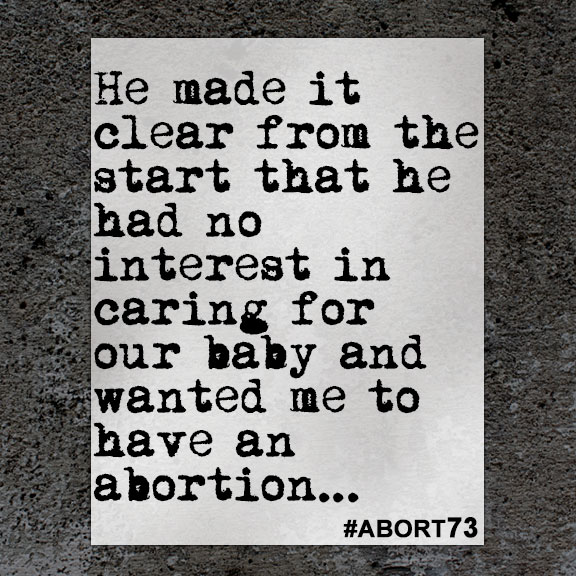 He made it clear from the start that he had no interest in caring for our baby and wanted me to have an abortion...

My home life was filled with abuse and trauma. I was looking for love and acceptance. I could not find it at home, so I turned to a guy to provide what I thought was love and care. In reality, it was abuse and manipulation. I had just turned eighteen years old, became pregnant, and was in my senior year of high school. I knew I was pregnant before I missed my period because something felt different. I bought a pack of three pregnancy tests and used every one in hopes that the next test would prove the last test wrong, but all ended up saying the words "pregnant.” When I saw the positive pregnancy tests, I had a mix of emotions come over me. I felt scared, shocked, overwhelmed, excited, and filled with joy.

The first person I told was the father of my baby. The father of my baby made it clear from the start that he had no interest in caring for our baby and wanted me to have an abortion. The second person I told was my mom. When I told my mom, she began crying and screaming. I walked out of the house and didn't return for a few hours until some emotions passed. I then told my grandparents. They had a similar reaction as they were disappointed and upset. Lastly, I told my best friend at the time. She was indifferent and was not quite sure what to do. I expressed to all of these people that I wanted to keep my baby. But this was only met with comments such as, “You are going to ruin your life… Don't you want a career?… No man will want to be with you because he will not want to raise another man's child". When these comments were said to me, I was crushed, but little did I know the worst was still to come. As the days passed and my family members and my baby's father realized my mind was set on keeping my baby, the comments and discussions became more brutal. The child's father started to become angry and made it clear that he would not support my child and me. My grandmother then told me that if I did not have an abortion, she could not talk with me anymore, and our relationship would end. My mom then told me that she would kick me out of the house if I kept my baby.

I caved into the pressure, making my first appointment at the abortion facility. The father of the baby drove me to the appointment. I remember getting out of the car, and prayer supporters were on the sidewalk. I looked at them, but they did not say anything to me. I walked into the abortion facility for my first appointment. The first thing I was required to do before even being allowed to get a seat in the waiting room was to pay for the abortion immediately. After paying, I sat in the waiting room for a while. I felt extremely nervous, sick to my stomach, and I wanted to jump out of my body and scream. I was called back for my appointment. I told them everything that was going on with my family and my baby's father. I told them how I wanted to keep my child, and I illustrated this by telling them that I was taking prenatal vitamins. The abortion employees either fell silent or diverged the conversation. They did not provide me with any help or assistance to keep my baby. Instead, they threw a few pieces of paper at me that talked about government assistance and stated that I could look at those for help.

The abortion provider then gave me an ultrasound—as it was required by state law. When they provided the ultrasound, they purposely only showed me one image, and it was the image that was the farthest out, so the baby looked like a small dot. The abortion worker then used this to promote their agenda to "prove" that my baby was really just a blob of tissue. I did not learn the truth about this ultrasound until years later, and that they did not show me the truth about my baby. After my first appointment, I went home and then returned two days later for the abortion procedure. I had a suction abortion, and my baby was about ten weeks old. From the time I had woken up that morning, I knew I did not want the abortion. I knew I wanted to keep my baby, but I thought that the only way out was either abortion or being pregnant and homeless.

When I arrived for my abortion appointment, I was taken back to the room where I undressed with only a thin medical sheet covering me, and I sat alone in a cold, sterile room, ready to cry. I felt very dehumanized. For the abortion, I did not take any medication, and I was awake for the entire thing. I remember a nurse/aide coming into the room with one last document they wanted me to sign. I stated that I was unsure, but I signed anyway. I think the aide said something to me to get me to sign, but I cannot remember what it was. At this point, things started getting foggy as my brain tried blocking out what was happening. Once I signed, the doctor entered the room; this was the first time I met the doctor. I lay back on the table, and the procedure began. They told me that I would feel discomfort, like I was having period cramps. This was far from the truth. It was very physically painful, and my body was treated like a rag doll.

The staff began talking with me about what plans I had for that summer—when I would no longer be pregnant. During this short conversation, I sensed what felt like small knives being pushed into my body and what felt like my insides expanding to the point of exploding. Later, I found out this was the stage where the doctor was opening my cervix to prepare for the abortion. Once the prep for my abortion was complete, the abortion staff stopped speaking with me, and the doctor turned on the vacuum. I remember feeling intense fear and anxiety when I heard the vacuum turn on. For the first few seconds, I heard the vacuum going. I felt paralyzed in fear, and my mind stopped working. After a few seconds, I came back to reality. I wanted to scream, “Stop, I don't want to do this," but I did not since it was already too late. I experienced regret during my abortion and even more once it was complete.

I walked out of the clinic and returned home emotionally numb. After a few days, I had a mental breakdown. I began screaming, crying, and hitting the floor in my home as hard as I could while screaming at the ceiling above me to let me go back in time. I had many of these small mental breakdowns as the weeks went on. My overall general anxiety and depression became worse. For the next year, I began to self-harm and contemplated suicide on many occasions. I went as far as driving my car 80 MPH on country roads at night, gripping the steering wheel tight while having the intense mental urge to turn the wheel towards a tree.

I tried attending college when I was 18, but I flunked out due to my anxiety and depression. I then tried attending college once again when I was 20. I flunked out again, this time due to a full-blown mental breakdown that lasted roughly three months. From there, I dated one guy after another and skipped from one job to another as I lived in a state of chronic anxiety and depression. When I was 23, things began going upwards. I was finally on the right medication and the right dosage of medication. I was dating a guy who was amazing—and who is now my husband—and I started going back to college.

I first began finding healing from the death of my child through reading online posts and articles from women who wrote about and regretted their abortions. These testimonies began to open my eyes that many other women were in the same position and that I was acting normal, considering the events I had been through. When I was 24, I found Jesus and accepted him as my Lord and savior. I attended a Bible study/support group for women who had experienced an abortion.

Through this group, I got the chance to name my child and honor her in the way she deserved. I confessed my sins and my abortion to God. I asked for God's forgiveness and asked my child for her forgiveness. Even though I think about my child every day, I know that she is in heaven and that I will see her again one day. My child deserves to be celebrated and remembered as well as every other child who has been taken by abortion. My child, all children taken by abortion, and all human beings deserve to have their voices heard and their lives cherished. That is why I am silent no more.