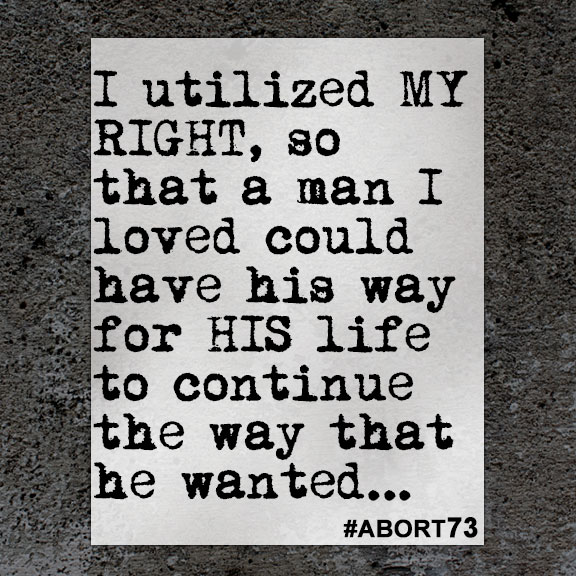 I utilized MY RIGHT, so that a man I loved could have his way for HIS life to continue the way that he wanted...

I was 36 and in a complicated relationship. It was an "unprotected accident." I wanted to keep it. So bad. I loved my boyfriend-at-the-time so much. Though not planned, I decided to have it. I told him after his unfunny "are you sure it's mine" joke. He then proceeded to bully me into why I needed to abort. And when I say bully, I mean gaslighting, berating me, belittling me. He told me how it would ruin our relationship. We would never get to experience anything together, that we should start a family when we were both ready. He said it wasn't just my decision. When I said “no time is a good time,” he said it would ruin his career and he wouldn't be able to afford it. I would be ruining his life. I would ruin the child. He finally ended with saying that he would have to break up with me if I had the baby.

He lived in LA at the time and I lived in NYC. He came to NY for the abortion. Looking back, it felt like it was more to make sure I actually went. He flew in the day before and left the day after. I have epilepsy and had a grand mal seizure after the DNC—which he just let me "sleep off.” I should have gone to ER. He told nobody. Like I said, he flew home so fast he didn't have time to stay and find out that the abortion had been incomplete. My uterus is tilted so it was complicated. My doctor gave me an option of another DNC or the pill, so I asked for the abortion pill. I told my boyfriend and begged him to come back. I said I would buy his plane ticket. I told him it is just like an abortion in pill form. He refused. I passed the remainder of the pregnancy on my NYC apartment floor, covered in blood, alone, late at night with my dog and two cats. I had another seizure and have never thought about killing myself more than in that moment.

I utilized MY RIGHT, so that a man I loved could have his way for HIS life to continue the way that he wanted. He is a commercial / broadcast director. He is part owner of his production company in Brooklyn. He lives in NY now, unfortunately, in my own neighborhood. He had a chance to stand up for women's rights, to let the world know how abortion helped save and shape his career but chooses not to. He never apologized to me or acknowledged his abuse. I'm not sure he even told anyone about the abortion. It has affected me every day since. I never had children and am now 44. When I think about how I wasted my right to choose on this man, I feel sick. I’m still grateful to have that choice, but each day is a sort of purgatory. The more I accept abuse of power… the weaker I feel—which is why almost a decade after my horrific experience, I am finally writing about it. Thank you for the space to share.