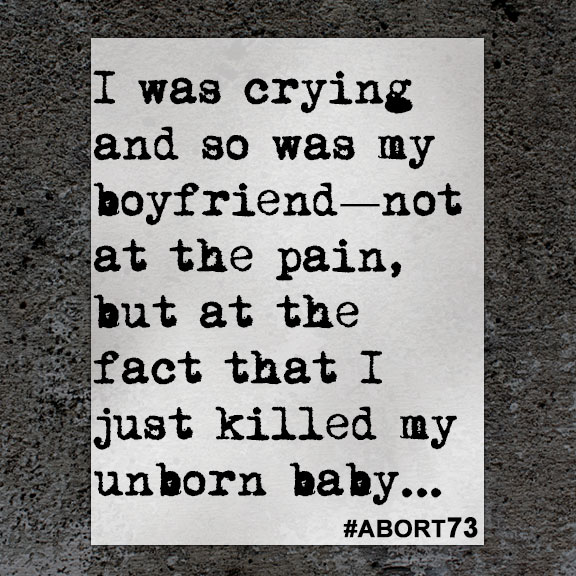 I was crying and so was my boyfriend—not at the pain, but at the fact that I just killed my unborn baby....

I’m crying as I type this.

I was 21 years old. I had been dating my boyfriend—who is now my husband—for a few months, and we were having sex without protection. We knew that it was risky but I didn’t think I could get pregnant. A few months later, I found out I was pregnant. I was in my sophomore year of college. We were both living with our parents, and we both knew how devastated they would be with an unplanned pregnancy out of wedlock. I was embarrassed about what people would think of me—pregnant by a guy who I had only started dating for a few months. I would become a statistic. We went to Planned Parenthood and I found out I was 6 weeks along. I felt like my whole world came crashing down. I knew it was wrong to kill the life that I was carrying in my womb, but my ego meant more. I scheduled an abortion for a week-and-a-half later. During the time I was waiting, I kept researching the size of my baby and what developments he/she would have at 6 weeks. Deep down inside I knew what I was doing was wrong. And yet that didn’t stop me.

We went to the clinic on the day of and as soon as we stepped in, I literally felt disgusting. I will never forget the coldness of the clinic, how literally lifeless it felt. You’re told how they support women in crisis pregnancies, and yet I felt no support. My boyfriend couldn’t come upstairs with me so I went by myself to the floor to do blood work and then to do a sonogram. I opted not to hear the heart beat because I knew that hearing it would definitely make me change my mind. I was in there for what seemed like hours. They gave me the pill and instructed me when and how to take it. That was it. You’re just a number for Planned Parenthood. Not an actual patient with feelings.

The next day I had to take the other pill that was supposed to let me pass my pregnancy. On my way home, I threw up. The pain was so unbearable. It was truly excruciating. And I was crying and so was my boyfriend—not at the pain, but at the fact that I just killed my unborn baby. I’m 27 now and we are married and have a beautiful son.

While I was pregnant with him, I cried a lot—especially when I heard his heartbeat at every appointment, when I felt his every kick. I carry my abortion story with shame. It is a pain that I have never known, and I would never wish it on my biggest enemy. My son has a big brother/sister in Heaven. And I’ve asked my baby to please forgive me because I can’t forgive myself. For not doing better. For not letting my baby live. For not protecting my son when the person who is supposed to protect him from all danger is his mother, and that was me. If I can’t protect him, then who can? I know that we would’ve had support. But I chose to end my baby’s life because of my own selfish desires. Maybe we would’ve struggled financially for a bit or maybe we wouldn’t have, but I know we would’ve been happy. And now I’ll never know who my baby should’ve grown up to be. Today I advocate for the unborn. Killing babies in the womb does not solve any problems. They are victims who need more people to speak up for them. I regret my abortion with all my heart and I find myself always wishing to turn back time.