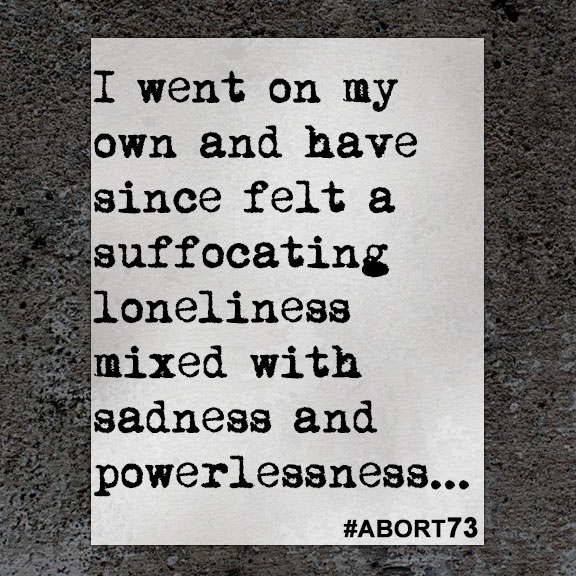 I went on my own and have since felt a suffocating loneliness mixed with sadness and powerlessness...

I've had a hard time assimilating all the things I messed up in my life due to abortion, but I admit I made the wrong choice.

I was 18 when I found out I was pregnant. My baby was due to be born on November 14, 2016, but I didn't let that happen. I was in the middle of a rough time in my life. I mean, teenage years are pretty rough for any person. There's always something, or something happens that brings you down. In my case, I was a troubled girl in a decaying and toxic relationship with my child's father, and my family was facing financial struggle as the family business had closed earlier that year.

I got pretty excited but terrified at the same time. I've always wanted to be a mother and I like kids, but given what I mentioned, I was in a pretty big dilemma. Once I confirmed my pregnancy, everything went downhill. My parents didn't want to talk to me and when they did, it was only to pressure me to get rid of it or get a job somewhere else. My boyfriend didn't want to take on the consequences of our act, and cowardly left town—only to come back and get killed by an Albanian gangster to whom he owed money.

I was planning to move to Germany with some friends, but no one could take care of my baby if I had to work. That's when I decided to abort, though I didn't make it to Germany with my friends. Little did I know that, without my baby, things would get even worse.

I don't want to talk about the procedure, because it was a pretty painful experience. I went on my own and have since felt a suffocating loneliness mixed with sadness and powerlessness—for years, while no one around me noticed or cared. Due to that, I became aloof for some time. I even thought of taking my life a lot of times. Such thoughts became so persistent that I reached the point of being very fearful every time I had to take the antidepressants that were prescribed in the therapy that I had to pay for with my own money—because I thought about committing suicide all the time, and an antidepressant overdose was a temptation. Fortunately, I was able to get over those feelings with some external help, because a part of me wanted to mend my mistakes and give myself a second chance.

I found this page some time ago, while surfing by random pages on the net, and I felt it was a good idea to open up and post my story today, on what would've been my child's 4th birthday— instead of hiding and crying on my own, like I did the last 2-3 years. This year, despite all the crazy things that have happened so far, I feel I really have finally forgiven myself for such a nefarious, mistaken and fateful choice. And that's made me feel better with myself. I just hope I'm able to go on and to eventually have a second chance.