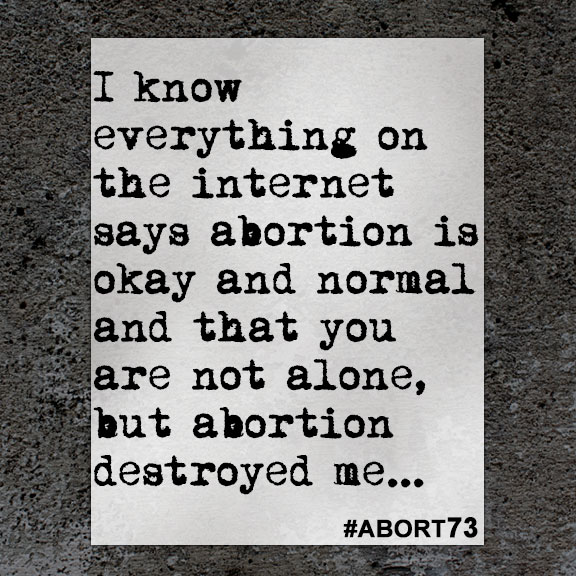 I know everything on the internet says abortion is okay and normal and that you are not alone, but abortion destroyed me...

I had a job as a singer/dancer at Six Flags St. Louis. My goal was to gain theme park experience so that I could eventually get a job as a singer/dancer at Disneyland in California, something that I knew I could accomplish. It was only a couple months after working at Six Flags when everything about my body was different, and I just knew that I was pregnant. I took a pregnancy test that week. It was positively pregnant, and I knew that my life would drastically change from that moment on. I was no longer thinking about Disneyland; instead I was now thinking about diapers and day care.

I had five female roommates, all of us working at Six Flags, and all of us becoming good friends. One day the oldest girl of the group made some dumb remark about me being pregnant, and my facial expression told her that she was right. Thankfully, she was very kind and she gave me a hug and she gave me a moment to cry. Later that afternoon we got back together and I told her about everything going on, and she listened to every word that I said. It was this lady, who was probably 10 years older than me, who reminded me that I had options, and she was very forthcoming in telling me that she had had two previous abortions and that she had no regrets.

I believe I had three more conversations with her before I decided on abortion. I never told my parents or my sister or anybody else I knew. I only told her. All I ever got out of her was that abortion was the right choice and the best option. All she ever really did was make me realize that I could still work towards my goals and she made me realize that a pregnancy shouldn't get in the way of that. And I don't think she ever used the BABY word. Instead the word she always used was "pregnancy.”

I had an abortion. I did it because I told myself it was the right choice and the best option, and I did it because my friend told me it was the only option. I remember every single detail about the building and about the waiting room and about the other ladies in the waiting room. My friend was with me, the one who convinced me that this was the only option, and she told me several times in the waiting room that everything would be okay. A nurse called my name, and I walked a VERY LONG WALK to a room that had a sign that said "surgical room." All I remember after that was having a needle placed in my arm and a moment later having some nurse checking up on me. I had some heavy cramping and I could not understand why because I was thinking that nothing had been done yet, but the nurse reminded me that I just had an abortion and that cramping was normal and from that point on I just faded away.

Nothing about me was normal after that day. I acted like I was okay, and I greeted guests at the park with smiles and laughter, but I was deeply hurt. My summer job ended a month later and I went back home to Bowling Green, Kentucky. I did not tell my parents anything about what I did, but I am sure they noticed something different. The next year I did try out for Disneyland, but I failed. I tried to get my old job back at Six Flags, but the position was already full. And I am not saying I failed because of my abortion, but I do know that my show of happiness during the audition was somewhat unrealistic. A year after that and I was pregnant for the second time, but this time I made the choice of keeping the life inside me instead of destroying it.

My abortion was in the summer of 2008. It was 12 years ago, but it feels like yesterday. I am 31 now, and I have a daughter who is 9 and a son who is on the edge of 3. I am grateful to have my two children, but I will always miss my first. I took a life so that I could live my dream and yet that dream never happened. Worst decision I ever made, and I wish I could take it back. I know everything on the internet says abortion is okay and normal and that you are not alone, but abortion destroyed me. It was not okay, and nothing about it felt normal.