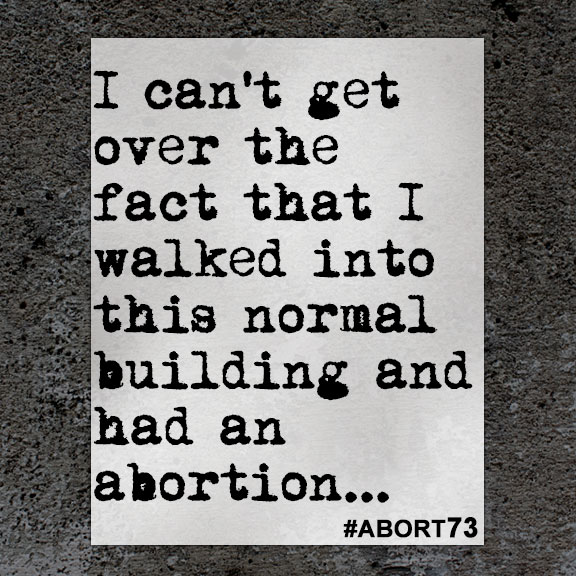 I can't get over the fact hat I walked into this normal building and had an abortion...

I had an abortion on August 25, 2017, at a place called All Women's Health in Tacoma. I was 21, single, had a nice good paying job at Costco, but I also had $26,000 in college debt. I was involved with a good friend from high school but it was nothing serious. Then in early August I found out that I was pregnant. My birth control failed, or I guess you can say I failed my birth control.

For weeks I acted like I wasn't pregnant, that it would just go away, but that obviously didn't work. I had a primary doctor, but I was too embarrassed to see her. I never told anybody about this pregnancy, including my parents, because I just couldn't believe that I was actually pregnant!

I decided on calling this women's health clinic and at least having an ultrasound to learn more about my pregnancy. I guess I just wanted info and answers and whatever I could do for my own self. Abortion was in my head, but it was off in the distance, and I wasn't interested in going to Planned Parenthood anytime soon.

So, I got the ultrasound at this health clinic, and the nurse told me I was 8 weeks, 5 days pregnant. I cried. I seriously cried! I tried to hold back some tears but I still cried. The nurse was nice and loving and did her best to comfort me. I was 21, 8-weeks pregnant, single, and I was working at Costco. I was not ready for this.

After I calmed down the nurse said, "WOULD YOU LIKE ME TO BOOK YOU AN APPOINTMENT FOR AN ABORTION?" Her saying that honestly took a million tons of weight off my shoulders. I could have an abortion, and somebody is telling me that I could, and maybe I should? I told her that I had to think about it and maybe I’d make a phone call later, but that was when I found out that All Women's Health was an abortion clinic. I did not know this. I thought Planned Parenthood was the only place that provided abortions; I seriously did! I never realized that other locations provided abortions also.

Now I have nothing against All Women's Health, and I can understand why they and other providers would like to stay "low key" and out of the limelight. But here I was, in a building that provided abortions, and I had no clue. It was and still is a normal office building, with a Walgreens behind it and a 24-Hour Fitness gym next to it. I always thought an abortion clinic was a Planned Parenthood that was a fortress with security guards and protesters. But this place was just an average building.

What made this appointment easy for me was that I had already been in the building. I had already met the nurse that would be with me during the abortion—the same nurse who did the ultrasound—and I already knew that I could just park my car and walk in with no problems. It made everything just kind of easy.

August 25, 2017. That morning I was pregnant. I arrived at All Women's Health at 9:45am. I walked out at 12:11pm, and I was no longer pregnant. It only took two hours and 26 minutes. The abortion itself only took maybe 10 minutes. I was awake for the procedure, and I remember every moment of it. Some discomfort, some pulling sensations, but no real physical problem. But it was the knowledge what was happening that was not easy for me. It was the strangest sensation of knowing that I was having an abortion, that I was allowing a doctor to use a suction device to basically make me “unpregnant.” It is so unnatural, and yet here I was doing it.

For the next week, I felt some discomfort, some occasional pain, some bleeding, but after maybe a week I was normal again.

It was Thanksgiving of 2017 when it just all hit me. I was out at this big family gathering, having fun, enjoying the people around me, and in an instant I realized that I SHOULD BE 5-MONTHS PREGNANT. It all hit me, the knowledge of knowing that I should be 5-months pregnant! I quietly walked out of that party, got in my car, and I cried. Everybody in that family would have been very supportive of me having a baby. My Grandparents on my mom's side would have LOVED to hold a great grandson or granddaughter in their arms. My parents would have been with me and helped me and supported me. LOVE WOULD HAVE BEEN ALL AROUND ME!

But no, I had an abortion. I was selfish. I only cared about me. I felt like I made the right decision, that I wasn't ready to be a mother. I needed a husband AND a perfect career AND no debt AND a nice house AND an amazing life. I needed ALL of this before I could have a baby. But in reality ALL of this will never happen; life never turns out the way you want it.

I had a baby in me, and not only that but I had a little miracle in me. But I had an abortion—9 weeks, 2 days—and that was the end of that.

Today my baby would have been 1 year and 10 months old. But now that this CHOICE has been made I honestly don't see myself ever having a baby. How do I have a baby and love a baby and love a child and be happy for having a child when I ended up removing a child that I already had? How can I say, “NO, I DON"T WANT YOU” for one child but “I LOVE YOU” for another? I don't see how anybody could do that. But I am 24, and I had an abortion at All Women's Health. And again I have nothing against them; they treated me with respect, but I can't get my head around the fact that an abortion clinic could disguise itself like a regular normal office building. And I can't get over the fact that I walked into this normal building and had an abortion.