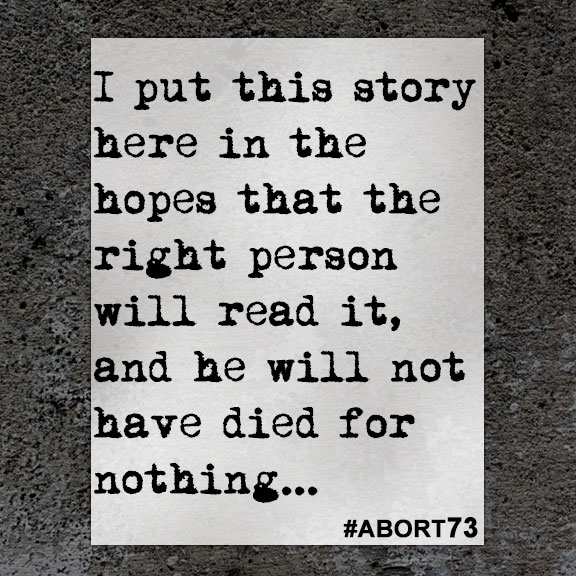 I put this story here in the hopes that the right person will read it, and he will not have died for nothing...

When I was in 3rd grade, I met a new girl. We were best friends instantly. For a long time I had no idea how unbelievably lucky I was to have her as my friend. She was adopted from India and her family loves her. She is extremely smart and helped me through some really tough times. I knew that she was adopted and that she was born prematurely, but I was shocked to hear the whole story. We were older when she told me and some of our other friends what had happened. Her biological mother had been pregnant with a baby boy who should have been her brother. But instead his mother took his life. I always wonder about that little boy. Would he have had his sister’s curly hair? Been an athlete? Made the Honor Roll? He deserved to live and be loved. Later his mother became pregnant again, with a baby girl this time.The same thing could have easily happened to my best friend. She could have been killed just like her brother. However, she was born prematurely and that may have actually saved her life. I am very against abortion because it killed my friend’s brother and nearly took my best friend away from me. I am very happy that she got to live, but sometimes I still wonder about that baby boy. I put this story here in the hopes that the right person will read it, and he will not have died for nothing.