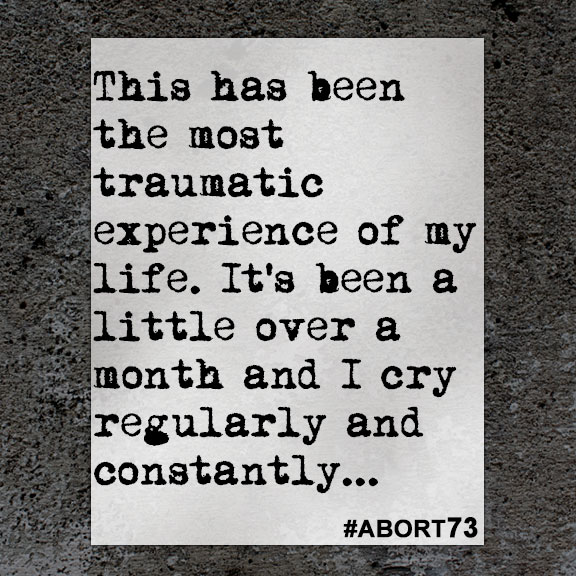 This has been the most traumatic experience of my life. It’s been a little over a month and I cry regularly and constantly...

I just had an abortion on October 18, 2019. It was my first pregnancy and I’m in my mid thirties. I want a child, but I’m not financially stable at all. I’m still a student and work part time and recently had to move back in with my parents. The father of the child was financially stable. But he and I had broken up a month prior to me getting pregnant, and he refused to get back with me just because I was pregnant. He said he would be there financially for the child and me, but he wouldn’t get back with me or give me hopes of any type of relationship or marriage.

That was one of my biggest fears—being a single mom, and he knew that. Even though he never told me to get an abortion, he made sure he told me, “I don’t think bringing a child into our current situation is cool.” He would say, “This isn’t the right time, but I won’t tell you not to have the abortion . . . The baby will be with you 90% of the time, and I’ll try to see the baby when I can on the weekends.” So even though he didn’t outright say “have an abortion,” he never told me “have the child.” He never said anything positive about the situation. I was scared and didn’t want to be raising this child alone. My parents are very religious, and I know they would’ve been mad. But that would’ve eventually turned to excitement down the line.

I was so uncertain. Half of me wanted this child and the other half wasn’t ready yet. I asked him repeatedly “if we could make it work” or perhaps even move in together. We lived an hour away from one another. I figured I would feel more secure that way, if we at least shared the responsibility of raising the child instead of the child being with me 90% of the time like he told me. He refused and told me we can just co-parent—and that he didn’t feel a child should be brought into our already-rocky relationship of one year. I was an idiot and due to fear, anxiety, and comfort, I had a medical abortion.

It was quick and I didn’t really feel much. Since I was only 6 weeks, it was done within three minutes. I didn’t feel pain immediately but had some intense cramps the following day. The first week was a bit rough physically; I was cramping pretty bad. I barely bled. I only bled for two days, but I cramped badly for a whole week. By the time the second week came, I felt normal again. I won’t lie and say the 6 weeks of pregnancy weren’t grueling. I was sick daily, I had absolutely no energy. I slept all day when I could and would take breaks at work to go sleep in my car. I was nauseous all the time. And the experience just wasn’t pleasant. But, it was exciting that my boobs started to grow and even within that short period of time, I would feel pings and pangs in my lower abdomen and would get excited because I knew that meant my uterus was stretching for my baby.

The first week after the abortion my boyfriend was attentive and cared and loved on me like never before. But that second week he really switched up on me. He started telling me that he’s not my therapist, that me wanting to discuss the abortion and cry to him made him feel uncomfortable. HE COMPLETELY SWITCHED UP ON ME AND GOT SO COLD! THIS HAS BEEN THE MOST TRAUMATIC EXPERIENCE OF MY LIFE. It’s been a little over a month and I cry regularly and constantly repent and tell God I’m sorry. I wish I could go back in time and not make such a rash decision based upon fear of not wanting to be a single mom and my finances. I wish I could do it all over again! And I honestly hate myself for what I did!

My boyfriend told me three weeks ago that we need to heal separately and that I NEED TO GROW THROUGH THIS EXPERIENCE AND NOT LEAN ON HIM SO MUCH!! I couldn’t believe he was telling me that! Like you were the main one encouraging me to abort and telling me you would be there with me through the whole process and now you’re basically going MIA and abandoning me!! I’m seriously still in shock at his behavior and have blocked him on everything I could think of and will be telling his mom too! I’m filled with such hurt and anger! Don’t ever not have your child because the father tells you not too or just doesn’t say anything positive about the situation! Trust in God if your funds aren’t where they should be. I wish I would’ve just done that! But I was too scared. I DON’T WANT ANOTHER WOMAN GOING THROUGH THE MENTAL TORTURE I’M CURRENTLY GOING THROUGH DAILY! It’s seriously not worth it!